What a field day! A beautiful (yet hot) evening out in the country near Oskaloosa. Mike and Jason Bandstra of Frisian Farms were our hosts for the evening. 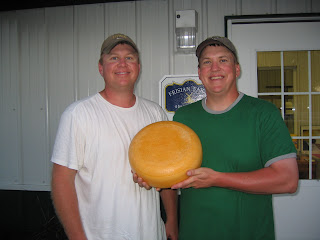 The field day turned into more of an Open House, but was really interesting. Each brother took a different aspect of their operation to give tours of. Each went through probably four or five tour groups. There were quite a few people there. My final head count was 93 people! 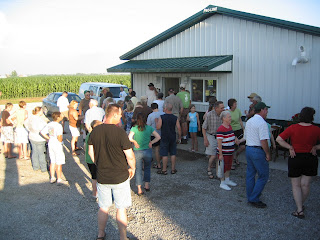 Jason (Above in the white shirt) took the tour through the milking parlor and back out into the loafing shed. They retrofitted an old hog confinement building to be a stanchion barn that milks 8-10 at a time. With their herd that is currently down in numbers to about 75, it took about two hours for milking time. Jason said that all of their cows were quite tame, and the only time they ever had problems was whn they had a new freshener that wasn’t used to the system yet. They had a really neat automated brush out in the barn that when the cows tipped it a certain way, it would turn on and clean them off. The cow I saw use it sure looked happy, and they were some of the cleanest dairy cows that I have seen in awhile! 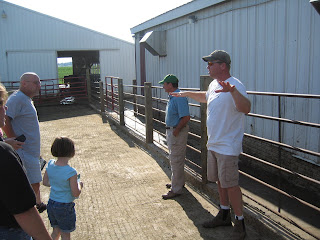 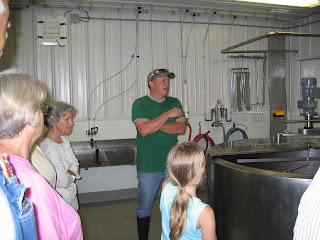 Mike sure made cheese-making sound like an easy process, but Im sure it is harder than it looks. Quite a large investment in equipment, I think he said $60,000, but the system looks very professional and has a great end-product. They make three different types: Regular, Smoked, and will soon start selling Aged. They have been making cheese now for 13 months, so the Aged is just about ready to be sold now.
They market their cheese through the Iowa Food Coop (http://www.iowafood.org/), through the Des Moines Farmers Market, and their product is in 6 area Hy-Vee stores and a few of the local Natural Foods Stores. Until the cheese is ready to be sold, it is stored in a large cooler. 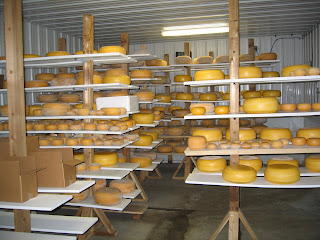 I have only ever seen pictures of cheese storage before, so it was really neat to get up close and personal with how they do it!
Last, but certainly not least, they gave us samples of their different cheeses. It was sure good! Each of the different types had distinct tastes, and all were very very flavorful! This isn’t your normal cheese, and is most definatly an experience for your taste buds! 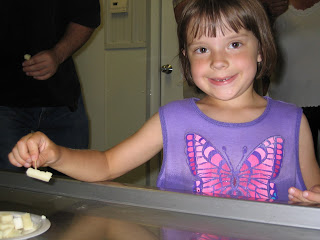 I would suggest getting at least a taste of their cheese from your local grocery store. If your store currently dosen’t sell their cheese, I’m sure Mike and Jason wouldnt mind talking with them to try and get some avaliable!
Thank you Mike and Jason for the chance to come out to your farm, and thank you everybody who came and made it a great night!