A somewhat rainy Saturday, August 15th brought us to Loyd and Renee Johnson’s place outside of Nashua for a field day. It never really rained, but the wind and temperature kept the large crowds away. Ultimately we had a group of about 20, but those who came were very interested and had alot of questions to ask.

The field day started off with Loyd giving an introduction of his farm and talking through some of the struggles and successes that he has had. 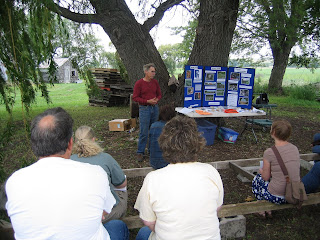 Loyd currently has approximately 4 acres in production, but his goal is to have 10 acres under production. They own 40 acres with the farmstead, and the remainder of the land not in vegetables is rented out to a neighbor for row crop production. There is currently one greenhouse and the goal of another 6-8 to be built.

Loyd puts a large emphasis on collaboration and supply pooling. He talked of the efforts of the Northern Iowa Food and Farm Partnership, which is working to bring growers together to have a larger supply for grocery stores in the area. There have been some struggles with bringing the group together, but things seem to be being worked out.

Mark Gleason from the Department of Plant Pathology at Iowa State University was on hand to talk about some disease possibilities in Sweet Bell Peppers. He gathered a few examples from the field, and talked about some ways that people can avoid those diseases. 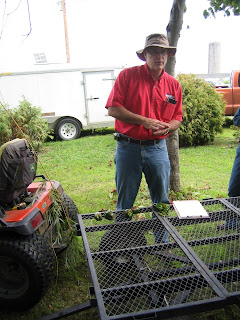 Loyd then showed us around his farm, and talked about some of the crops that he works with. He plants many Sweet Bell Pepper plants every year, and this year planted approximately 7,000 plants. He is also doing a disease trial with ISU in his bell peppers. Loyd talked about how it was difficult to keep weeds controlled, and also the leaning and bending involved in harvesting peppers was “hard work”. It may be hard work, but his pepper patch looked beautiful, and he had great looking fruit growing! 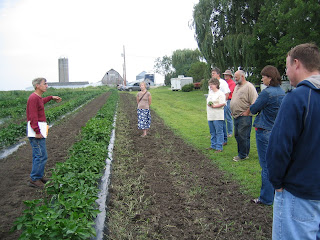 The next stop on the farm tour was the Broccoli patch. Loyd was frustrated that after you harvest the crown, the plant isnt going to produce another crown. To solve this problem, Loyd began harvesting side shoots and bagging them for sale. A great solution to a problem! 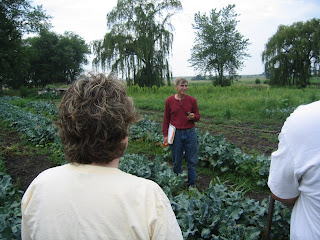 We also looked at Loyd’s Greenhouse where he is producing Tomatoes. He said that the week before we were there, he picked 600 lbs of slicing tomatoes, and 600 lbs of Romas. Thats alot of tomato! The plants inside the greenhouse were climbing towards the roof, and looked wonderful! 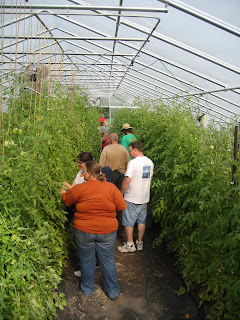 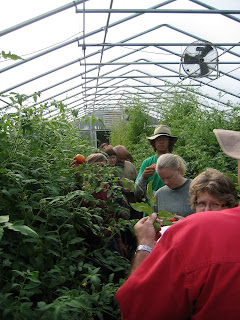 And of course they were good to eat! 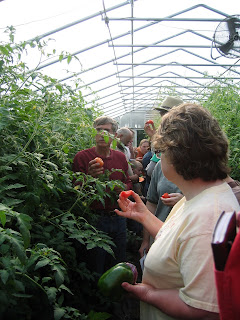 And always a fun part of field days is getting to see the farm pets. These two kids were really enjoying Loyd and Renee’s kitty, and the cat was enjoying it too! 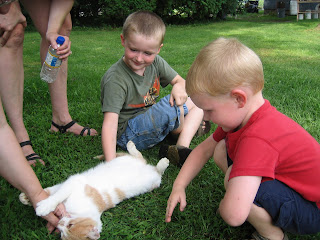