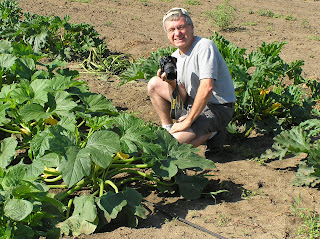 Last night, we attended the retirement party for Jerry Dewitt, longtime friend of Practical Farmers of Iowa and director of the Leopold Center for Sustainable Agriculture. There were many kudos for (and funny stories about) Jerry, including the following from PFI member John Pesek:

“Jerry has been deeply committed to the concept of sustainable agriculture and has written very thoughtful and inspired columns about its dimensions, and even more dedicated to farming and the farmers in Iowa. He is personally familiar with hundreds of farmers, and he has made it a point to make contacts with as many as possible. He has served agriculture in Iowa diligently and thoughtfully yet with a flourish. He has been eminently approachable by all who sought his counsel or who worked with him.”

When Jerry retires, I am going to miss my monthly coffees with him. He’s fun, he’s thoughtful, and he cares deeply about farmers. He ended the dinner last night with a tribute to several of them who were in the audience, including Dick and Sharon Thompson, Ron and Maria Rosmann, and Tom and Irene Frantzen.