On Thursday, April 22 Kevin Dietzel and I headed to southeast Iowa to enjoy the sites and tasty bakery treats of Kalona, IA and also learn about innovative approaches to cover crops. Some might call SE IA the “tropical zone” of Iowa. I would agree. They have a much longer growing period in the fall following grain harvest and have warmer temperatures in the fall. Maybe that is why several innovative cover crop farmers keep emerging from those soils. One of those many innovative farmers is Steve and George Schaefer. 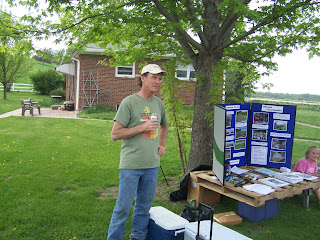 George and Steve Schaefer showed about 15 nearby farmers how they are using cover crops in both no-till organic and no-till conventional farming systems as well as grazing cover crops. 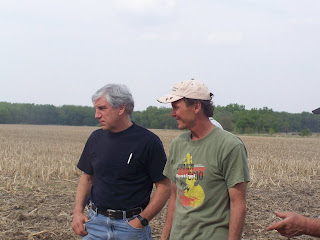 The Schaefer’s use cover crops to control weeds in their organic soybean field and also improve soil quality in their conventional no-till systems. The past two years they have planted a winter rye and let it grow to boot stage (when the plant is heading out). Then they use a shredder/chopper to cut the plant and kill it without chemicals. Right behind the shredder they no-till drill soybeans into the mulch. The past two years their yields in the organic no-till soybeans and the tilled organic soybeans have been equal. They have not had to manage weeds in the organic no-till soybean plots. They are also planting winter rye into standing corn through aerial seeding. A nearby pilot flew on winter rye (2bushels/A) into standing corn last September. The Schaefer’s are participating in 5 year study with Practical Farmers of Iowa and the Iowa Learning Farm to measure the effect of a winter cover crop on the following year’s crop yield and soil quality indicators.

Pictured is a tine weeder that the Schaefer’s use to control weeds in their organic row-crops. 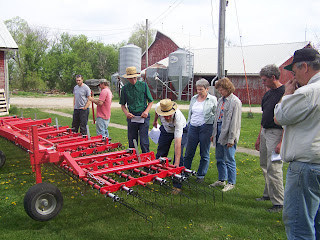 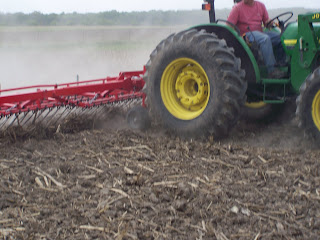 Finally, the Schaefer’s use their cover crops for grazing 150 cow-calf pairs they manage on their land. The aerial seeded winter wheat and winter rye cover crops are good forages this spring for the cattle. In fact, due to little frozen soil which was insulated by lots of snow last fall, cover crops really grew fast and early this spring. George says he will probably be baling his cover crops because he has too much for his herd to keep up with. Too much pasture seems like a good problem to have. 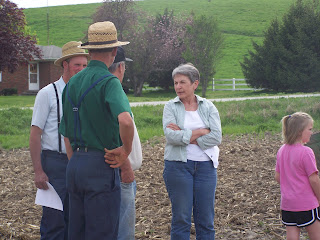