On Wednesday, April 21, 2010, Greg Judy came and gave an all-day workshop at the Northeast Iowa Dairy Center in Calmar. Despite beautiful weather outside, over 50 people came and sat inside all day to listen to Greg talk about holistic high-density grazing. People asked great questions all day. That did not seem to phase Greg at all, in fact it seemed to make him even more enthusiastic about what he was talking about.

We had a lunch of ham sandwiches, with ham from Grass Run Farm and lettuce from Berry Patch Farm in Nevada. Here is a picture of some participants grazing the food selection. 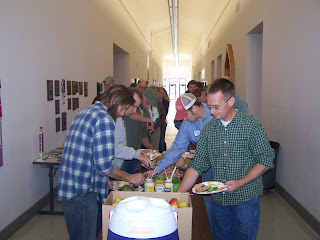 Some highlights of what he covered:
Busting the myth that long rest periods lead to low productivity
Since implementing Holistic High Density Planned Grazing, he has doubled his stocking rate in four years with no purchased inputs and on average only nine days of feeding hay per winter. He says this is because of high animal impact for a short period followed by a long rest period. The long rest allows the plants to fully recover (he says grasses have recovered when they have at least four leaves) and be more resilient to drought. The high animal impact causes plants to be trampled onto the soil surface, resulting in soil organic matter buildup, and increased microbes and earthworms, which all help to grow more grass. Each paddock is grazed twice a year: once during the growing season and once during the non-growing season as stockpiled forage.
The last three years, he has combined all of his herds into one mob, including cows, heifers, bulls, stockers, and finishers. By doing this he is able to increase the animal impact his herd has, and has reduced the labor of frequent moves by only having to move one herd. His cows wean their calves when they are ready.
Multi-species Grazing
Greg also talked about grazing multiple species. He is currently grazing his sheep separately from his cows, mainly because he is afraid of the predator losses he may have initially. He has been advised by Ian Mitchell-Innes, a rancher from South Africa, that he will no longer need his guard dogs if he runs the sheep with the cows, but he will initially lose a lot of sheep who are not smart enough to stay with the cattle herd. He does sometimes run feeder pigs with his cowherd without separate fences. They stay with the cows to eat fly larvae from the cow pats.
Pasture Water
Greg has many ponds on his farm, which he uses as a water source for his cows. He claims the cows also serve to keep the ponds and their banks clean and healthy. He does this by fencing right along the edge of the pond so the cows can drink from the pond without standing in the water itself, and he moves paddocks around the pond, giving them a small chunk of shoreline each day before moving them to the next section.
The day following the workshop, I received an email from Greg Judy, saying how impressed he was with the northeast Iowa graziers and all the great questions they asked.