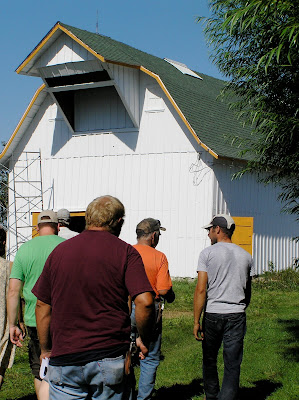 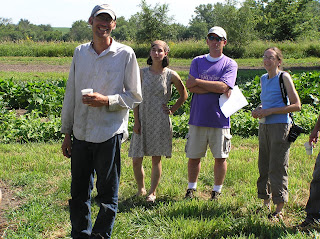 Yesterday, Rick and Stacy Hartmann and Brian Hayward hosted a Field Day at Small Potatoes Farm. There is a lot to like about their operation–they raise high quality vegetables {I know: I’m a member of their Community Supported Agriculture (CSA)} and are extremely thoughtful in their approach to a farm business. Rick is featured on one of our Farminars, check out http://connect.extension.iastate.edu/p37909396/ to see his comments on the Five P’s of Marketing (Product, Price, Placement, Promotion, and People).
Their farm looks even better since I last saw it–they have put siding on the house, painted the barn, and are building a new vegetable processing building as well. 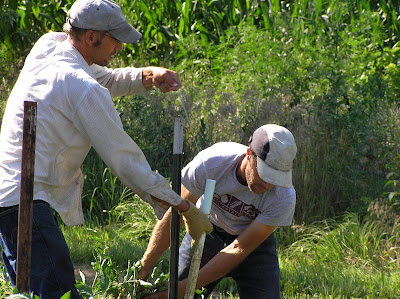 Rick participated in a season extension project with PFI this last year and he reported on that. Small Potatoes Farm tends toward using their existing infrastructure to meet production goals, so the popular new hoophouses were not their chosen direction for extending the season. Instead, Rick chose to grow storage crops like beets and rutabegas for the farm’s high/humidity/low temperature walk-in cooler to sell in November and December. Rick reports revenue in November and December from this extending season offerings accounted for 4.7 percent of total farm revenue. He also said, however, that some consumer education may be needed to get consumers to eat “in season” and to move these storage crops in future years. 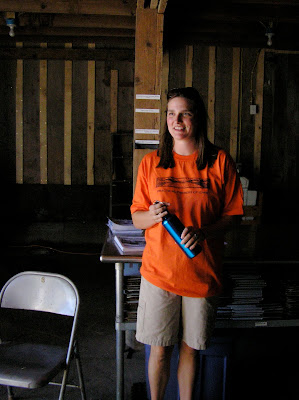 Sally Worley, PFI’s horticulture director, reported on some other Iowa farmers’ efforts to store crops in the field over the winter. Rob and Tammy Faux, Tripoli producers, had carrots and leaks unprotected in the ground all winter and sold them in April/May. “I don’t have to do anything to them and don’t have to provide storage room for them. I am the only one at the first market with carrots and leaks,” Rob told Sally.

Mark River from Manning harvested beets, carrots and turnips in December, January and March. His plants were protected with eight inches of leaf mulch. He sold these crops at winter markets.

Lots of good discussion at this Field Day and so many others this summer!