PFI keynote speaker: “I am in this game to change it, not to complain about it” 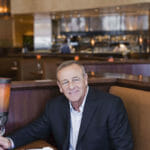 The keynote address for the 2012 PFI Annual Conference will be given by Fedele Bauccio, founder and Chief Executive Officer of Bon Appétit Management Company. Bon Appétit provides food service to more than 400 cafes in 31 states, including corporations such as Target and Yahoo! and colleges including American University and St. Olaf.
Bon Appétit leads its industry in implementing sustainable practices. The company spends more than $55 million annually purchasing from local producers. It has used rBGH-free milk and yogurt since 2002, hamburger from animals raised without the routine use of antibiotics since 2003, and cagefree shell eggs since 2005. In 2007, Bon Appétit launched a campaign to drastically reduce the carbon footprint of all its cafés, and in 2011, Bon Appétit’s foundation released a report documenting the lack of legal protections and rights for farmworkers.
A first generation Italian-American, Fedele says “he knows a little bit about the value and simple pleasures of good food.” He grew up chomping on “fresh tomatoes like they were apples, the juice dribbling down my chin” and watching his mother cook in the kitchen. “Early on my mother instilled in me the importance of growing, cooking and savoring (preferably with friends) the freshest ingredients from the garden.” He’s disheartened to read statistics about how, for example, first graders can’t even identify a tomato. However, like the surge of beginning farmers to Practical Farmers, Fedele sees “on college campuses, everywhere, another side of young Americans” who are “reconnecting themselves to our beautiful countryside, the fertile soil and the flavorful ingredients of my own childhood.”
His first job was washing dishes in the commons at University of Portland; within six months he worked up to become a kitchen worker pealing vegetables. Fedele founded Bon Appétit in 1986 to “transform the food that people eat at college and in the workplace.”
When the company began its Farm to Fork local purchasing program back in 1999, “it was originally to address the loss of flavor we’d noticed in produced grown on a large scale and shipped cross country.” Says Fedele: “Flavor and taste were critical to me. I allowed the chefs to go out in the community. And support local farmers, and gain their trust to grow our apples, lettuce, and tomatoes. We called it Farm to Fork before it was fashionable.” Today Bon Appétit is working to increase its purchases from mid-size poultry and hog farms, cattle ranches, and dairies that meet its stringent criteria. According to the Bon Appétit website; “By doing so, it will nourish this critically endangered segment of agriculture known as the “disappearing middle.” And by requiring third-party humane certification, Bon Appétit also hopes to increase the supply of ethically raised meat and poultry, which has not kept up with demand as the meat industry consolidates under ever-more-massive factory farms.”
Through the company’s “Low Carbon Diet” program, Bon Appétit has reduced food waste by 20 percent. Most of their food is fresh and prepared daily onsite, so chefs adapt their menus to use what’s on hand, including using excess food in soups and stocks. Bon Appétit has also developed cooking methods that use cuts from an animal through their “nose to tail” policy. “With a United Nations Report on food waste worldwide stating that over half of all food produced is wasted or discarded due to inefficiencies in the supply chain, we’re stepping up to do everything we can to reduce our contribution to the problem,” Fedele says.
Fedele and Bon Appétit have received many awards. Fedele was honored with one of the inaugural James Beard Foundation Leadership Awards (also won this year by PFI member Fred Kirschenmann, Senior Fellow of the Leopold Center, who will introduce his friend at the PFI conference.)
Fedele said his work is “about rebuilding a regional food system capable of providing healthy food to everyone, while enabling farmers to make a living. It’s about shortening the supply chain and fostering personal connections between producers, chefs, and diners. It’s about supporting the work of small family farmers and preserving the integrity they bring to the food they produce.”

For more on Bon Appétit and Fedele Bauccio, visit www.bamco.com or the company’s educational site Circle of Responsibility: www.circleofresponsibility.com.