On August 27, 45 people attended a field day at Francis Thicke’s Radiance Dairy in Fairfield. It was a beautiful day, but dusty — Fairfield, like other parts of Iowa, was in the midst of a serious drought. 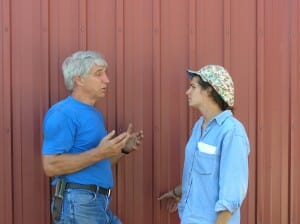 First on the agenda was a presentation by PFI energy consultant Rich Schuler. Schuler talked about the work PFI is doing to document the experiences of farmers like Thicke who are  implementing alternative energy technologies like wind turbines, photovoltaic panels, and solar thermal panels. Schuler and Thicke are working together to monitor energy use on the farm, including electricity, LP, diesel, and gasoline, in addition to tracking the farm’s CO2 emissions.

Next up, farmer and wind energy expert Gregg Heide presented about the options for farmers looking to implement wind energy on their farms. Heide advocated for farmer-controlled wind energy. He spoke about his own experience being approached by wind energy developers who wanted to lease land on his farm to erect a turbine, and the potential pitfalls of such arrangements. He also elaborated on the rates farmers could expect to receive from utility companies for the energy produced by a wind turbine, and showed slides of a new photovoltaic array just installed on his farm. 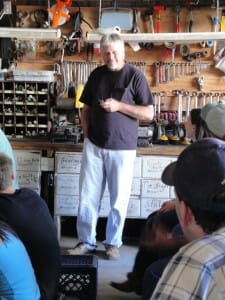 Before everyone got on the hay rack to tour the pastures, Thicke gave a short slideshow describing his various on-farm energy projects, including a solar-thermal installation used to preheat water for the dairy, and the third-party kit he used to convert his hybrid Prius to a plug-in, all-electric vehicle. Thicke answered audience questions about technical aspects of these projects.

Finally, seated on milk-crates atop the hayrack, the attendees visited about 40 of Thicke’s 80 Jersey cows. Due to the long-running drought, the cows were eating balage rather than fresh grass, but all still seemed happy and healthy. Thicke said he sometimes pours molasses on the bails to make them more palatable for the cows.

After fielding questions about feeding, fly control, and other topics, Thicke drove attendees up a hill to the 4,000 gallon water storage tank that feeds the small water barrels between each paddock. From atop the hill we could see the pond from which the water is drawn into the storage tank. Next to the pond, two photovoltaic panels power the pump that fills the tank. The tank itself features an automatic shut-off to prevent overflow. 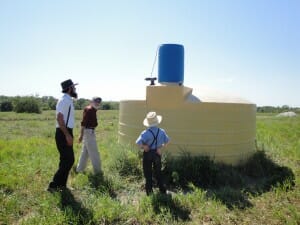 The last stop of the tour was the milking parlor and bottling facility. The parlor can accommodate eight cows at a time, four on each side. When cows come in to be milked, they are also sprayed with pressurized soybean oil, which kills flies on contact and is an effective repellent. In addition to the soybean oil, Thicke uses sticky tape in the parlor to trap flies, and also releases fly predators, which he buys in bulk bags of unhatched larva.

From the parlor, the milk is piped into the bottling facility in the same building. Here, Thicke fielded questions about machinery, cheese-making, raw milk, and other topics. To top off a great day, attendees were treated to samples of fresh Radiance Dairy cheese. Delicious!