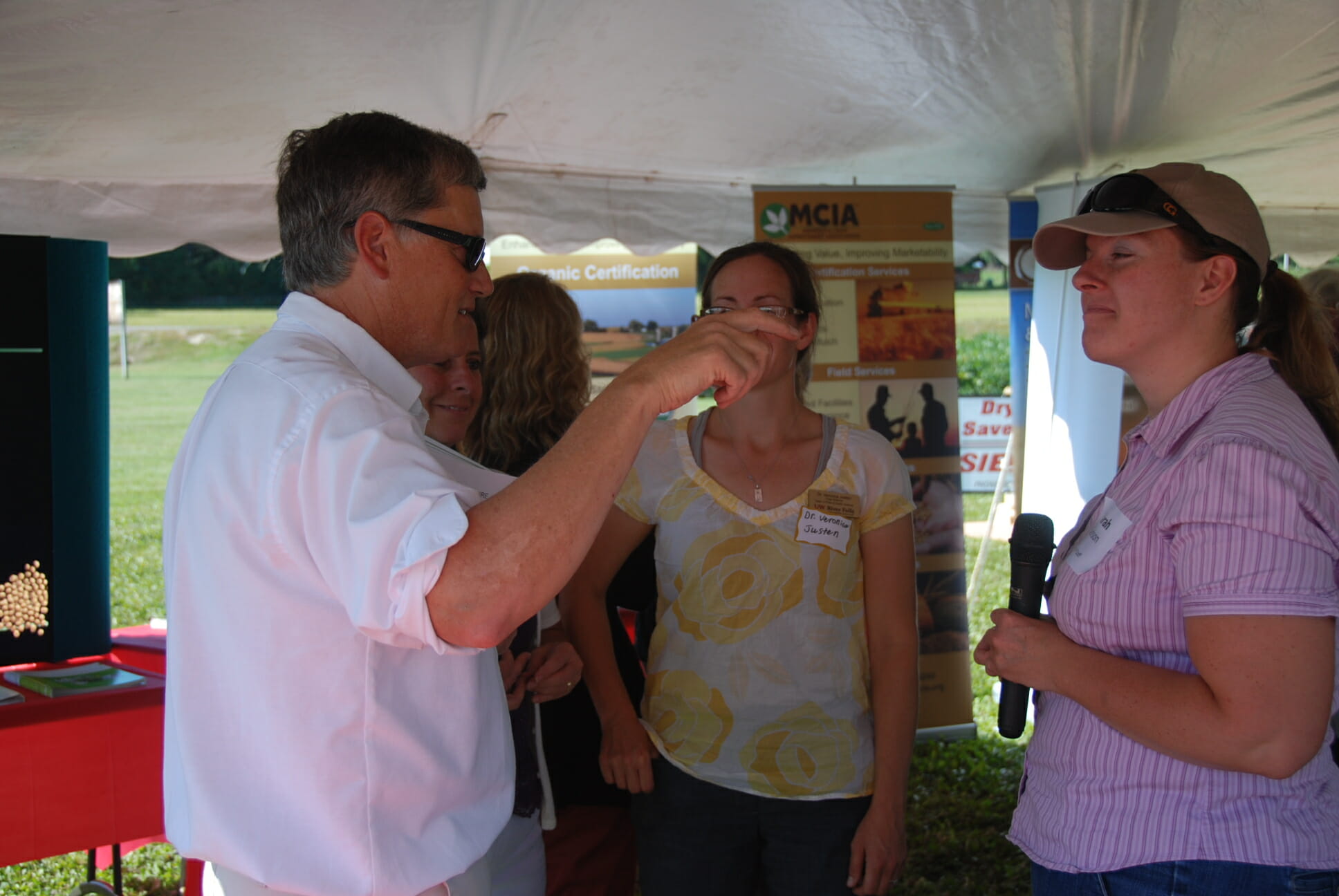 The day was full of activity, and the mix of farmers, sales reps, corn breeders and a few students all stayed busy, learning what seed is available now and what is on the way.  Dr. Don Huber, professor emeritus at Purdue University, also provided an in-depth presentation that demonstrated how genetics play a role in production practices and outcomes.  The Field Day was unique in that it was not held on a farm, but rather invited farmers to come learn what is going on in the world of corn breeding and what non-GMO seed is available.

The day started off with mingling and much of the talk was around how organic and conventional farmers can access non-GMO seed.   Blue River Hybrid Seed, Brown Seed Genetics (the host), Grain Millers, and Albert Lea Seed were some of the retailers in attendance.  Several breeders were there as well to discuss their work, including Walter Goldstein, Kevin Montgomery, Susan Duvick, Alix Paez of Genetic Enterprises, and Charlie Brown of Brownseed Genetics.

Then we all headed out to the field plots to learn more about each breeder in the network, and what varieties they have been working on. People came from throughout the Midwest and even from as far away as Florida as you can see on this map of the USTN.  Each dot represents someone in attendance from that area.

All this activity begs the question: Why has interest in non-GMO seed increased over the last few years?  Organic farmers are required to use non-GMO seed and the need for hybrids that suit their growing practices—for example, faster leaf growth which can shade out weeds sooner resulting in less cultivation—has called attention to the necessity of breeding new varieties.  Interest in improving the nutrition of corn varieties has also played a role.  And as more “corn-belt” farmers transition to organic, the demand for organic corn hybrids has rapidly increased as well.  The USTN has helped address these issues in part by bringing together the few breeders of non-GMO corn from across the nation to share resources and get appropriate hybrids to farmers, whether organic or conventional.  The showcase highlighted the many breeders who are a part of this network and the fruits of their labor: the new non-GMO hybrids.  Retailers helped close the loop by providing information to farmers on what seed is available and how much it costs.

Don Huber, the featured speaker, helped shed light on why conventional farmers are considering making the shift from GM-seed to non-GM seed. To see his presentation click here Huber, Understand glyphosate.  He talked about the role of genetics in creating yield increases, and heavily emphasized soil health and the interactions between nutrition, disease and herbicide use on production (see his presentation slides here: INSERT – DataII, Field Days, 2011, “Huber, understand glyphosate”).  One thing Dr. Huber stated that has stuck with me was that crop nutrient deficiencies that result from the use of glyphosate may actually equal the increase in yield that Round-Up Ready crops provide.  So essentially, the use of GM-crops for yield gain can quickly become a zero-sum game, as farmers experience increasing yield losses over time as a result of these two factors (nutrient deficiencies and glyphosate) alone.  This doesn’t even include the cost of inputs which also affect a farmer’s bottom line.   Though he heavily emphasized the need to use glyphosate judiciously to preserve soil health, Dr. Huber’s overall message was the importance of continually reassessing agricultural practices and adapting them to better fit what we learn over time through that constant re-evaluation.  That doesn’t sound too radical to me, but it does sound like it takes a group of people exchanging ideas. 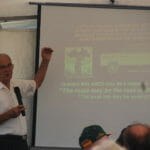 In this vein—learning and exchanging ideas—the Field Day was a success as farmers and seed retailers toured this year’s corn trials after Dr. Huber’s talk.  One farmer who has been growing conventional but non-GMO seed for over a decade was looking for a new variety that he can use for either sillage for his dairy herd, or sell as feed into the market.  This kind of dual-use corn seemed to be a hot ticket item among the group of farmers pictured below. 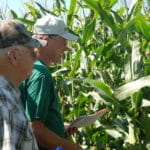 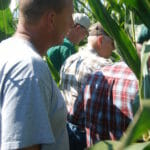 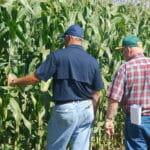 We hope you can join us next year at the 4th Annual USTN Corn Breeders and Seed Retailers Showcase.  If you have any questions, email Sarah at sarah@practicalfarmers.org.