Learning About Producing Beef with the Ebersoles

Shanen and Beau Ebersole grew up in different surroundings. She grew up with horses but had little exposure to production agriculture. She feels this gives her an advantage in knowing the viewpoint of her customers. He grew up in a family that raised beef cattle and crops, and has since worked in hogs, as an AI technician, managed feedlots, and most recently as a feed salesman for the local co-op, so one could say he knows cattle. 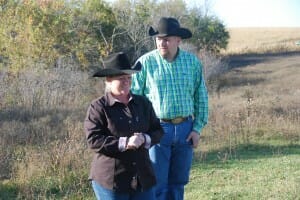 The Ebersoles have combined their talents and interests to create their protocol for pasture-raised beef that they sell at farmers’ market, direct to customers, and through some wholesale outlets. They raise their animals in a natural, humane way, not receiving any artificial hormones or non-therapeutic antibiotics. They feed grain to their beef animals in a creep feeder on pasture (less than 2% of bodyweight) and harvest them at 14-16 months of age. The bull calves are never castrated, which Beau said acts like “a natural growth hormone”. Shanen likes that they don’t have to go through the stress of castration. From weaning on, the bulls and heifers are kept separate, and they have not had problems with aggressive behavior or with off-flavors in the meat. 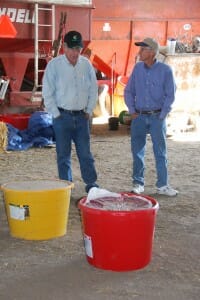 We also heard about the lick tubs the Ebersoles use to provide their cows with adequate minerals and protein to supplement the pasture. Beau pointed out that it is important that cattle get chelated minerals, which are more available for uptake by the animals and improve performance. These tubs also contain natural rumen enhancers (not the ionophore Rumensin).

The Ebersoles also talked about the importance of good cattle handling facilities to their operation. This is especially important since they do a lot of custom grazing, which often involves treating animals and artificially inseminating (AI) cows.  When they set up this farm a few years ago, they used many of the concepts from Temple Grandin’s book “Humane Livestock Handling” to design their facilities, including ideas like moving cows in a counter-clockwise direction and only moving a few animals through a squeeze tub at one time.

Running custom cows provides good cash flow for the farm, allowing them to prepay all of their pasture rents and then have enough paid-for pasture left over at the end of the season to be able to stockpile graze in the fall and winter with their own cows. Most of the cows were fifteen miles from the farm, so we unfortunately were only able to see a few of them at the field day.

The Ebersoles would like to improve a lot of things on their farm, such as fencing and watering infrastructure, to allow them to rotationally graze more intensively. Their farm also needs to have the fertility built up a lot to improve grass growth. 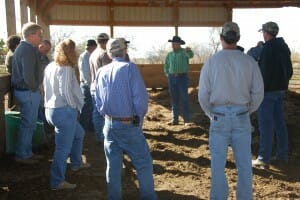