Jeremy and Kelly Gustafson and Jeremy’s father Steve and uncle Larry hosted 60 farmers and NRCS and IDALS staffers to their farm at the end of corn harvest in Boone County on October 27, 2011. 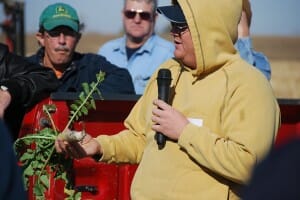 Jeremy talked about using an oat cover crop typically in the fall for several years. Then last year they tried a winter rye cover crop too. They also planted a cover crop radish to see if that would help break up any soil compaction. The radishes didn’t really germinate in the fall but some seed germinated in the spring and then was growing in the spring until they sprayed them with herbicides to plant their cash crops. They left some radishes grow all season in a nearby ditch. With a full season of growth the tubers and size of the radishes were still only about the size of a large carrot. 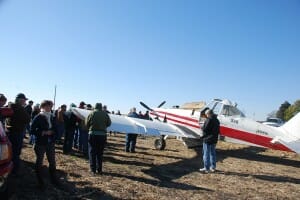 This fall Jeremy worked with Ralph Storm from Storm’s Flying Service out of Webster City to fly on winter rye into standing soybeans and corn. Then the Gustafson’s drilled a cover crop of oats on corn stubble to show the difference in the growth. There was little rain in the Boone area for much of the late summer and early fall so not as much cover crop growth resulted. The Gustafson’s also got hit with a dry fall last year and had poor fall establishment.
Ralph Storm then talked about the best ways to speed up planting cover crops—-using an airplane.  Ralph flew on winter rye, winter barley, winter wheat, radishes and some other cover crops this fall. 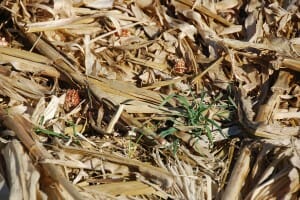 He likes to have a weigh wagon or a wagon with an auger at the airport so that the seed can quickly be augured into the plane to speed up the “re-fueling” for each trip. To find a pilot near you check out PFI’s Cover Crop Business Directory which is a list of pilots who can plant cover crops in Iowa. Following Ralph’s presentation Tom Kaspar from the NLAE and John Sawyer and Jose Pantoja from Iowa State University presented data about cover crop work they have conducted around the state. To learn more about adding cover crops to a corn and soybean system check out these 2 new videos from PFI with funding from the Iowa Learning Farms.