Pasture walk and more at the Wheelers

It was advertised as a pasture walk – but it was so much more! On Saturday, November 19th, eleven people gathered at Jake and Amber Wheeler’s farm to discuss winter grazing, cattle genetics, cedar tree removal, farm profitability, farm enterprises, marketing, time management and more. 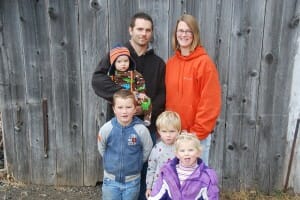 To begin, we brainstormed all the farm enterprises we could think of – that might remotely fit into the Wheelers’ system and be consistent with their values. We had quite a list (which I left with the Wheelers). Most of those enterprises the Wheelers will not start on their farm, but hopefully gave them some ideas of all the possibilities out there. 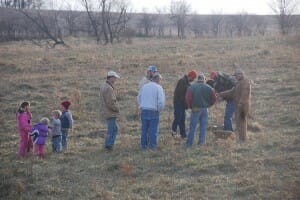 Next, we went out to the pasture and had some great discussions about stockpiled grass. The Wheelers’ stockpiled pastures are mostly fescue grass. Not sure what discussion the kids are having in the photo above… 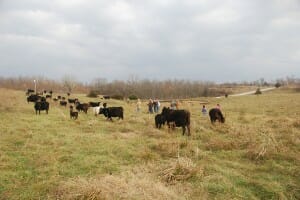 We also saw the Wheelers’ cows, calves and heifers, all grazing stockpile in one herd. Jake talked about his goals to start line breeding and some of the interesting experiences he has had with different bulls. He also felt like many of his cows were thinner than he wanted to be going into the winter, especially since he does not feed them especially high-quality stuff. In his system, animals need to live outside in harsh conditions and live off of stockpiled grass for a good portion of the winter. 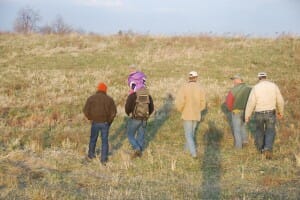 By the time we got back to the house, it was dark and chilly outside and we had lost half of the attendees, so we sat around the kitchen table and ate delicious chili while we had a conversation about farm profitability. How do you turn a part-time operation into a full-time income? What marketing and business structures would work best for the Wheelers? Much of the conversation centered around the Wheelers’ need to write and implement a business plan, and for Jake to prioritize time on the farm. It is hard to turn down paid electrical work off the farm (besides the farm, jake is a self-employed electrician)!

The Wheelers were recently selected to be part of PFI’s Savings Incentive Program (SIP), whereby they will save money for two years and get a dollar-for-dollar match from PFI (up to $2,400), and during that time will get help writing a business plan for their farm, as well as being paired with an experienced farmer as a mentor and attend PFI events throughout the year. Hopefully this program will help them to achieve their goals of a profitable, sustainable farm where they can raise their kids.