Fourteen hardy folks gathered on Garth Lloyd’s farm in Scotland County, Missouri to go for a stroll and look at grass and cattle. 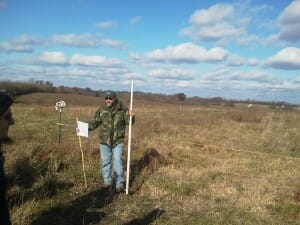 Garth showed us around his pastures and shared some of his experiences. Garth is a cooperative seedstock producer for Pharo Cattle Company in Cheyenne Wells, Colorado. He practices high-density grazing on his farm, meaning he moves his herd to a new paddock 4-6 times a day during the growing season. This results in stock densities of 300,00-500,000 lbs. of live animals per acre, and rest periods around 150 days. 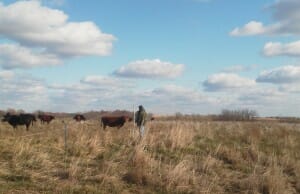 Garth uses temporary fences for paddock divisions, and uses a piece of PVC with a notch at one end to lift up the fence for a temporary “gate” (as shown in the photo above). 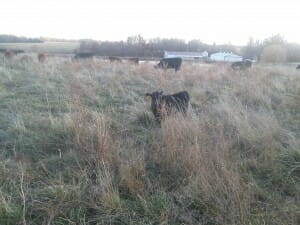 It is amazing how much green grass is still in these pastures, especially considering that they received almost no moisture from the end of June until the week before the above photo was taken. Most of the stockpiled grass is tall fescue, which stockpiles well but is not so great in the heat of the summer. Due to the drought, Garth has less stockpile available to him this year than normal. He will need to decide whether to buy hay or sell animals, as he does not make any hay himself.

When grazing stockpiled grass, Garth moves twice a day, saying that high stock density can cause damage when the pastures are not actively growing.

Garth’s only culling criteria for cows are whether they wean a calf or not. Using that criteria and by selecting smaller-frame bulls, his average cow size has decreased drastically over the last nine years, with most of his cows weighing around 1,000 pounds now. Many of his remaining older cows that were black and weighed closer to 1200 pounds aborted calves during the heat this summer, and have therefore been culled.

Garth also pointed out places where he has healed gullies through his management, and other places where new gullies have formed. He says water is a constant battle with his hilly farm.