Ever wonder what stockpiled pasture looks like on a cold and rainy December day? Well then you should have been at the Carneys’ pasture walk this past Saturday! 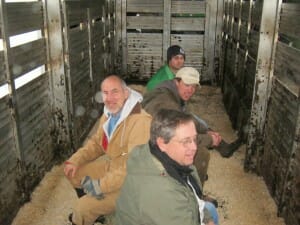 Luckily, Bruce put us in the stock trailer so we wouldn’t get too wet… 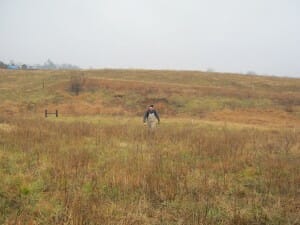 One brave soul who arrived a little late even walked out in the rain to join us in the pasture (Jake Myers). 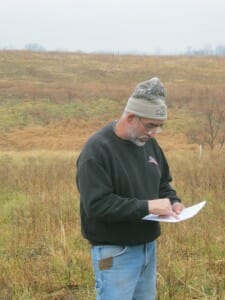 Bruce Carney (pictured above) told us about how he manages his pastures to have winter stockpile to graze. One of the changes he has made this year is moving back to rotational grazing (moving every few days) after a few years of trying high-density grazing (moving one or more times each day). The years when he grazed with high stock density and long rest periods, he felt he “beat up” a lot of pastures, possibly because those years were wet years. He also had problems with fescue toxicity last winter grazing his stockpiled pastures, most likely because the fescue grass had been rested for over 150 days before it was grazed. More mature fescue tends to have higher concentrations of the problematic endophyte that infects many fescue stands. 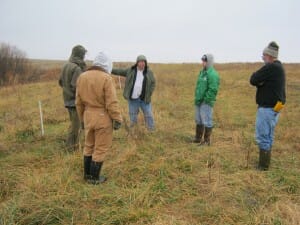 Joe Sellers (above, center), of ISU Extension also talked about different ways to manage fescue grass to avoid toxicosis. The main strategies are to keep the fescue vegetative (not headed out) and to dilute the endophytes. The first strategy involves grazing or haying more often; on stockpile Sellers recommends 90-110 days of growth (start stockpiling around August 1st). The second strategy involves either getting more diversity in the stand, either through your grazing management or by interseeding other forage species, or supplementing the pasture with hay or grain. The advantage of fescue grass is that it is very hardy and it maintains its quality well through the winter.

Don’t think fescue is a problem in your area? Keep monitoring your pasture stands to make sure it doesn’t become a problem! Sellers says fescue is moving north. The Carneys barely had any fescue on their farm 15 years ago. There are some “non-infected” fescue varieties, but they tend to not be as hardy or aggressive as the endophyte-infected varieties, so they will often get crowded out with time. There are also some “novel endophyte” varieties of fescue that are infected with a kind of endophyte that is not toxic to animals. The seed for novel endophyte varieties tends to be significantly more expensive. 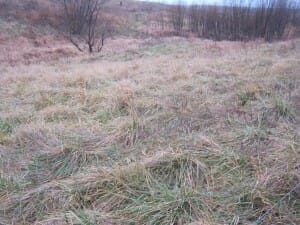 The above photo is pasture that has not been grazed all year (very long rest period!). 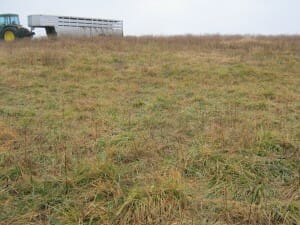 And this photo is the stockpiled pasture across the fence (last grazed in July). 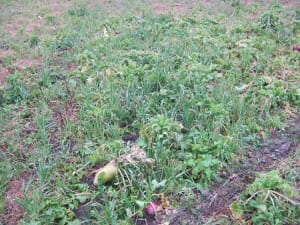 Next, we saw a field of annuals that was planted (drilled) in July and again in September. The July mix was daikon radishes and turnips, the September mix also had oats. Because it was so dry and the field was weedy, not much grew from either seeding (part of why there were two seedings), except where there had been hay rings the previous winter (shown above). The Carneys will graze this annual forage mix in the next few weeks, as the radishes and turnips will not maintain quality for very long after freezing temperatures set in. 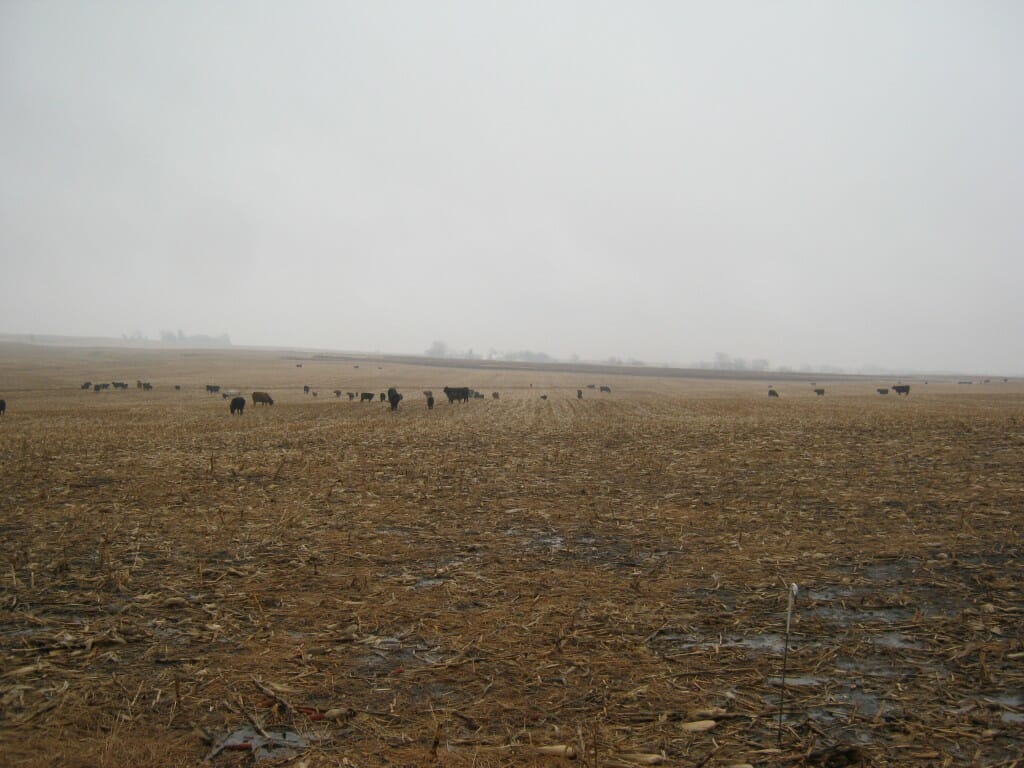 Our last stop was at this corn field where the Carneys’ fall-calving cows are grazing corn stalks. Bruce says the transition to corn is smoother when the corn field has waterways and field edges with grass, so the cows can transition their rumens to the corn with some grass as a buffer. This is less of a necessity with dry cows. He also said that this field would last longer with dry cows, since their nutritional needs are lower. Any class of animals will get better utilization of cornstalks if they are strip grazed, meaning only a strip of the field is given to them at a time (similar to rotational grazing). Bruce does not feel the utilization gained is worth the labor it would take to do the extra fencing.

At the end of the pasture walk (or ride), we went back to the shop and got hot chocolate, coffee and cookies while the great conversation continued.