A Novel Remodel for Season Extension 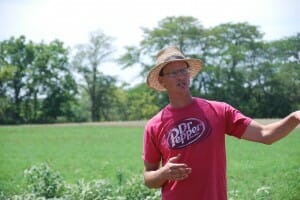 On Friday, July 20, twenty people gathered at Rainbow Ridge Farm in Waverly for a tour of farmer Jason Gomes’ vegetable fields and discussion of his produce storage bunker.

Gomes primarily grows potatoes, sweet potatoes, onions, melons, and garlic for wholesale distribution. While looking at the crops, attendees asked questions about irrigation. Gomes uses drip tape now, with water pumped to the fields using a single 3 hp pump near the source and a pressure regulator before the water reaches the tape. Previously he had used a spray system, with one 3 hp pump at the source and another near the sprayer. Gomes said he likes the drip tape, but has had problems with rodents chewing through it and causing leaks.

After viewing Gomes’ fields, attendees learned about the farm’s energy-saving produce storage “bunker.” The bunker is a part of the house that is underground, and was previously used for storing firewood. It is now used for several purposes: part is walk-in cold storage, and another part is a solar heated chamber for curing/drying produce and starting seeds in the spring. The heating is accomplished by a small attached greenhouse.

Gomes received a demonstration grant from the Farm Energy Working Group to fund labor and some of the cost of materials for the bunker. He has also compiled a comprehensive instruction manual for those interested in similar projects.