High-Value Rotations on a Grass-Based System

“It’s sure a nice sight to see this out in the middle of corn country,” remarked one attendee at Friday’s field day in Keystone, IA.  Amidst huge tracts of corn and beans, the icons of conventional Iowa agriculture, participants gathered at a much different enterprise.  Acres of corn have been replaced by long rotations of small grains, some organic corn, and forages for hay or grazing. 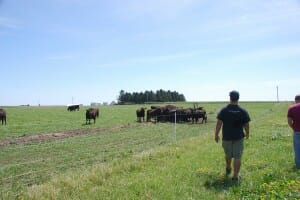 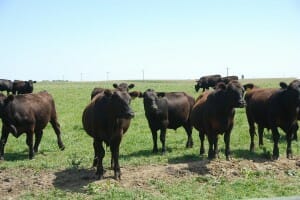 The Wallace Farm has been in the family for over a hundred years.  Father and son team Steve and Nick Wallace own nearly 160 acres along with some other family members.  Several decades ago the land looked just like its neighbors – row cropped and rotating corn and beans – as is typical of an area with a high CSR.  However, the Wallaces are more interested in long-term sustainability and land use, so the acreage now sports a variety of crops and uses. 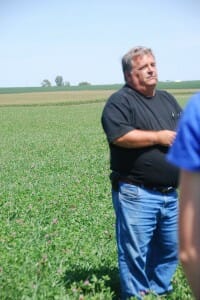 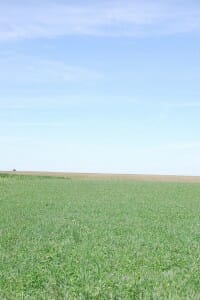 Nick and Steve explained that originally they had put the fields into perennial pasture to graze cattle and sheep.  After several years though, they noted reduced forage production (and consequently cattle gains).  So the decision was made to start some long rotations, avoiding the issue of the “years of depression” that come when a field has been in the same crop for a time.  On the southern half of the farm, fields cycle through organic corn, oats, and then six years of hay or pasture.  The northern portion has corn, sorghum-sudangrass, a small grain, and then three years of hay.  Even the border between fields, required for organic status, is utilized as hay.  The various forages provide grazing land and winter fodder for the cattle – about 80 steers that are bought and finished in about a year, from December to December.

Farm and field management makes use of nature’s ability to self-sustain.  Rotating crops helps cut down on weed problems, and grazing cattle helps to till and fertilize the soil.  The varieties of forage types utilized ensure feedstuffs throughout the year, a concept Nick calls the forage chain.   Spring weather favors cool-season grasses like brome and fescue, which are grown in conjunction with higher-protein legumes like birdsfoot trefoil and clovers, and deep-rooted forbes like chicory that bring minerals up from deep in the soil.  High-yielding sorghum-sudangrass holds up well in summer heat and provides a few cuttings for baleage, to be fed during the winter.  Hardy species like kura clover ensure productivity year after year, and selection of quality varieties like Italian ryegrass and BMR (brown midrib) sorghum-sudangrass provide highly digestible feed.  While on the surface, having so many fields in so many different crops seems daunting or overly complicated, the rotations are thought-out and deliberate. 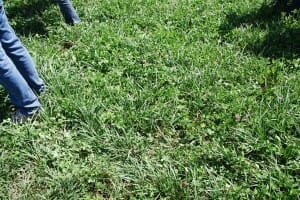 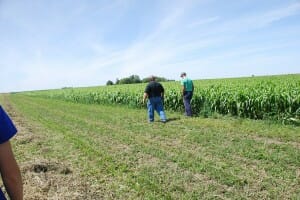 Nick’s goal is to market “the best quality food I can find or raise.”  Collaborating with other farmers, the Wallace’s grassfed beef is joined by organic (or close to it) turkey, pork, and seafood.  While the business started selling to less than a hundred customers about seven years ago, it now serves over 3000.  Snack sticks are sold wholesale across the country, and meat products are sold through buying clubs as far away as Chicago.  And there aren’t plans to stop there: Nick and Steve are looking at trying a few new enterprises like heirloom popcorn, fruit from a small orchard, and perhaps vegetable crops.

One project just starting off is pastured eggs.  Nick showed off a new portable hen house designed by Tim Koegel, a longtime poultry pasturer from NY (http://www.windyridgepoultry.com).  Featuring timed lights, heaters and de-icers, externally accessible feed troughs and nest boxes, and braces to stabilize it during windstorms, the coop brought gasps and oohs from the crowd.  Eventually Nick hopes to have six or seven of them, following the grazing cattle to scratch through manure piles and control fly numbers, while providing eggs.  Each house will hold approximately 200 hens, which will stay in the unit for about three years – units will be staggered time-wise so that there are always productive hens around. 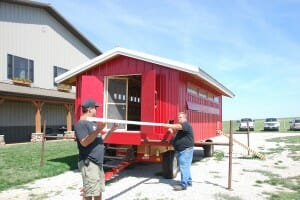 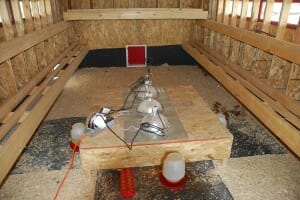 Wallace Farms is a beacon of sustainability and ingenuity in a sea of convention.  Steve remarks that he “hopes I live long enough” to see the entire farm running smoothly and with minimal inputs – and hopefully under the care of Nick’s sons.  While decades of row cropping reduced the strength of the ecosystem, they’re already observing more species and number of birds in the pastures.  It hasn’t been an easy or bump-free transition, but the Wallaces are confident that with the right management, the land will support and heal itself.  As managers they strive to note the changes and challenges, and adjust appropriately.  “That’s the plan – subject to change!” was the mantra of the day.