The projector screen stood in stark contrast to the straw bales and farm equipment in the Wilson family machine shed.  But none of the thirty participants at Tuesday’s field day minded the classroom constructed of straw bale benches and plywood tables, but rather watched and listened intently.  The topic was permaculture: a concept about which many imagined the gist of the meaning, but didn’t know the real definition.  The speaker was Karl Schmidt, owner and manager of Glacial Lakes Permaculture, and student of the practice’s founders.  He was invited by the Wilson family to discuss the tenets of permaculture.  Dan and Lorna Wilson, their son Torray and his wife Erin, along with other family members, are all cooperators in the outstanding operation that is Seven W Farm.  Now the Wilsons are considering making their diverse farm even more sustainably-minded through permaculture principles. 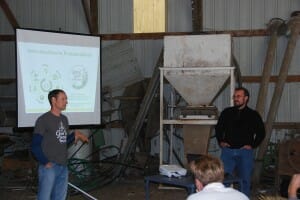 Permaculture, as Karl explained, is a “design system for ecological and sustainable living, integrating plants, animals, buildings, people, and communities.”  The movement doesn’t believe that preserving the environment and making a profit should be mutually exclusive.  Bill Mollison, one of the cofounders, described it as the “conscious design and maintenance of agriculturally productive ecosystems.”  Those involved in permaculture don’t identify as a certain type of farmer, says Karl, because they are involved in multiple enterprises that all feed off of and supply one another.

The key elements of permaculture state that there is an element of design: the farm or system is planned, not simply let to grow wild, in the effort to be sustainable.  Along these lines, permaculture integrates multiple systems into a coherent whole.  There are no waste products in permaculture: what is seen as a byproduct of one system (say livestock manure) is an input to another (say crop ground).  The final key element is that permaculture is a process or a framework more than a technique – “not a tool, but a toolbox,” says Karl.  Each farm is evaluated individually and a deliberate plan installed.  While there are some general themes and practices within a permaculture system, all situations will differ.  It is a very information-intensive practice, as the balance between the inputs and outputs mentioned must be weighed and considered. 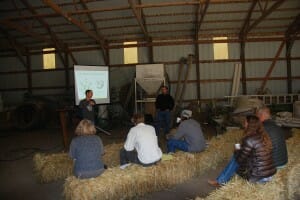 In fact, the first principle of permaculture is to simply observe and interact.  The land is allowed to ‘tell’ the managers what its plan and preferences are, rather than the managers ‘telling’ the land what they want from it.  A land-use plan is established based on what the land will support.  Other principles include the capture of energy, producing yield from captured inputs and available resources, continued modification and observation over time, balancing inputs and outputs, and ensuring renewable resources.

Some practices common on permaculture establishments are familiar to many farmers, but others seem a bit odd at first.  Species diversity is a theme among a number of PFI members, but the idea of planting some permanent woody trees and row cropping between them – a practice called alley cropping – is a bit different.  The use of trees and other woody perennials is also not commonplace on Iowa farms.  Karl introduced the practices of cutting trees or bushes, either towards the bottom of the plant (coppicing) or the top (pollarding) and using the forage for livestock, fuel, or other uses.  Many native tree species are amenable to this sort of management, and can thus provide a physical barrier, visual pleasure, food, and fuel all at once.

The group finished by doing a needs and yields analysis of some sort of enterprise they were considering adding to their farm.  All of the inputs and outputs were considered, and participants shared their analyses of compost worms, aronia berries, rabbits, and hogs.  Not only were obvious products like meat and manure or salable product counted, but other benefits like composting, recycling of food scraps, agritourism possibilities, and so on.

Permaculture is a possible next step for ecologically-minded farmers.  It takes elements of diversity and multiple revenue systems and thoughtfully integrates them into a closed, healthy system.  While it would represent even more drastic changes to some PFI farms, it is the sort of radical yet brilliant sort of movement that many Practical Farmers relish.  It also hearkens back to traditional forms of agriculture and heritage farming.  Each farm had its own character, and the products from there had unique attributes.  In Europe, wines from the same variety of grapes will taste different because of the shades of difference in soils and management from one valley to the next.  The US has lost much of this uniqueness and heritage appeal – permaculture provides an opportunity for farmers to establish a niche and market their individuality.

Karl has graciously offered to provide his powerpoint presentation to those interested.  In addition, he offers consulting and designing for a fee – please contact Margaret (Margaret@practicalfarmers.org) to be put in touch with him.  He also provided a list of books and resources for those who want to learn more.

Those interested in seeing permaculture in action should check out Forest Agriculture Enterprises, a 106-acre farm managed by Mark Shephard near Viola, WI: http://www.forestag.com/index.html