Hog farmers and interested friends from across Iowa gathered to discuss challenges and opportunities in niche pork production at the Frantzen Farm on March 7 2013.  PFI master researchers and founding members Tom and Irene Frantzen hosted the field day to review past research, discuss new areas of study, and to learn to conduct quality investigations.

Eighteen people cozied up in the Frantzen’s dining room to talk about their interests and ideas.  Some were PFI members, some produce pork for Organic Prairie and Niman Ranch, and some were just looking for more information and ideas.  Fellow master researcher Ron Rosmann briefly described his hog feeding trial from 2012, which demonstrated similar performance between pigs finished on a corn-soy ration and those fed corn, soybeans, succotash, field peas, and hay.  The results are encouraging but must be taken with a grain of salt – “hardcore” statistical analysis could not be completed due to some errors in setup.  The talk then turned to proper planning and management of trials; particularly timely since both Ron and the Frantzens are running feeding trials for PFI this year. 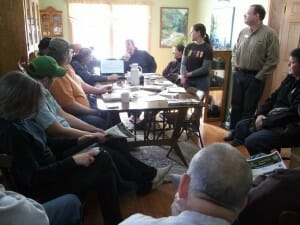 Attendees at the Frantzen Farm field day on organic and niche swine research discuss challenges to production and ways to investigate them.

ISU Extension Specialists Dave Stender and Matt Swantek provided essential background on the setup and science behind feeding trials.  “Randomized and replicated” are terms that any PFI cooperator has heard, but how do you replicate a trial with animals?  The same animal can’t receive both treatments!  The solution involves minimizing variatioin within research populations, getting repeated data, and keeping thorough records.  No, one pig can’t be fed two diets from weaning to finish – but two pigs from the same litter can each be fed one of the diets.  Their similar genetic makeup and management environment increases the likelihood that they would perform the same, if fed the same diet.  So, if they perform very differently, it’s more plausible that the difference is due to the diet, not to the pigs themselves.  So across a group of hogs to be put on a feeding trial, it is important to split them as evenly as possible based on weight, age, sex, breed, and litter, for starters.

Beyond the pigs themselves, the environment and management must be similar.  Side-by-side pens that experience the same temperature shifts and light patterns are good.  Matt described a feeding trial facility he worked at, where certain pens were avoided because they were near to doors, ventilation fans, or other sources of noise, reduced temperatures, and other stressors.  Similarly, the two treatments should be as identical as possible aside from one tested variable.  If two diets are being compared, one with high and one with low protein, the other aspects of the diet must remain similar.  They must include the same vitamins and minerals, and have similar energy density.  If not, it’s impossible to say whether one group of pigs grew better because of the protein, or because of something else.

Stender and Swantek handed out literature from the University of Nebraska Lincoln on how to set up proper research trials.  A checklist in the back “talks” through the process of checking variability and trying to minimize it.  Another sheet from PFI included lists of essential information to record – animal IDs, weights, feed ingredients, and so on.

Attendees asked about the best way to get replications and sufficient numbers.  Dave and Matt acknowledged that it’s difficult at times to get a “perfect” research trial on a farm.  For instance, given forty pigs, it would be excellent to have eight groups of five.  Four groups would receive one treatment; the other four the different treatment.  This generates eight data points and gives researchers a better glimpse at the variation between hogs and treatments.  However, not every farmer has the facilities to accommodate this.  Tom only has two pens to use, so he can only have one group of hogs per treatment.  This generates only two data points.  To get additional data points, Tom will have to repeat the trial again several times, which introduces other sources of variation – time of the year and weather, for instance.  But it is still more accurate than running the trial only once. 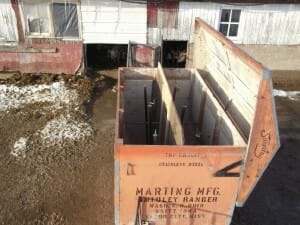 PFI cooperator and master researcher Tom Frantzen split his hog feeder so that the amount of feed consumed by each group of pigs can be monitored.

As mentioned, Ron and Tom are both participating in feeding trials for PFI this year.  Organic swine production faces challenges like high feed prices and susceptibility to illness and disease, but insufficient research has been conducted on it.  The discussion then turned to the new trials, as well as other areas of interest.  While conventional hogs are able to get feed conversion rates of nearly 3.0 (calculated as lb of feed consumed / lb of weight gain; thus lower is better), many organic farms are far above that. A brainstorming session in February turned up the following possible causes: breeds and genetics, diet nutrient content, parasite load, environment, and feeder management.  Ron is looking at the “tightness” of feed bunks.  Rather than allowing hogs to quickly dispense feed (often leading to wastage and spillage), he will tighten down some of his feed bunks so that the pigs have to work a bit harder.  He will still insure that no hog goes hungry by “reading” the bunk and hand-feeding some grain, but he hopes that this will reduce feed wastage significantly.  Tom meanwhile is looking at parasite loads.  After taking fecal samples from a group of weaned hogs, he treated half with ivermectin, separated the groups, and will finish them both.  After the trial and any repetitions, he will hopefully be able to say what sort of an impact the dewormer has on worm populations (via fecal exam) and animal performance (via final weights and records of illness).

So what will this research do for other farmers?  The parasite load or feeder setting is not going to be the same on every farm.  But trials such as this can help identify the areas of possible concern on any farm.  Based on the results, other producers may try adjusting their feeders a bit tighter and seeing what happens to their hogs and their bottom line.  If ivermectin-treated hogs tremendously outperform organic hogs, then other alternative deworming treatments can be tested.  Similarly, researchers could be shown that parasites are harming organic production, which might spur more large-scale investigations and lead to parasite treatment breakthroughs.  By establishing basic protocols ont heir farms, Tom and Ron hope that other hog farmers in PFI, Organic Prairie, and Niman Ranch will investigate similar issues.  Indeed, Organic Prairie’s Jeremy Matthes said that some trials are being done and that data is being collected to answer similar questions.

Among other trial-specific data, Matt and Dave asked the farmers to accurately track hog weights and numbers, and the amounts of feed consumed.  With this, Matt develops intake curves – graphs and formulas that can relate a pig’s body weight to the amount of feed it will eat.  These curves have been developed for commercial lean hogs, but are not accurate for organic or niche hogs, with different genetic backgrounds and environmental conditions.  More accurate intake curves will make ration balancing easier and more accurate for niche hog farmers and those who assist them. 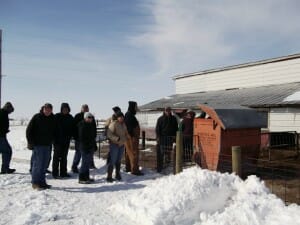 The group also got to tour the Frantzen’s farm and see the new trial, which had just been setup the day before.  Twenty-two feeder pigs were split into two groups based on weight, gender, and breed.  Both groups get the same feed and are located in nearly-identical side-by-side pens.  One group received basic vaccinations, while the others were also given a dose of ivermectin and an eartag to designate them as nonorganic.  In an ideal situation, more than two pens would be available so that multiple groups could be fed at once.  However, valid information will still be gained from this trial, and Tom will repeat it once these hogs finish. The next time, the organic and nonorganic pigs will switch pens, to try and elucidate any possible environmental interactions. 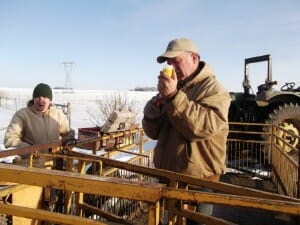 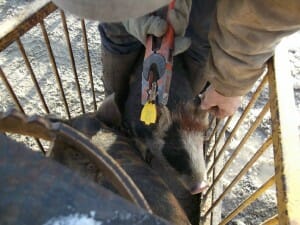 PFI cooperator and master researcher Tom Frantzen gives a pig an eartag after injecting it with ivermectin, to mark it as non-organic.

Practical Farmers of Iowa believes in farmer-led investigation and learning.  Farmers interested in participating in on-farm research through the Cooperator’s Program should contact Margaret Dunn at Margaret@practicalfarmers.org.