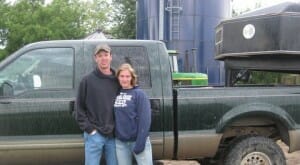 in western Iowa. Dave wrote this summary to share with the PFI network.

Meg and I produce grass-finished beef near Exira, Iowa on rented pasture and crop ground. Early business plan work in PFI’s Savings Incentive Program showed us that land and feed costs are our biggest expense. Now our focus is extending our grazing season, limiting the use of hay, increasing pasture forage production, and spring cover crop grazing.

We returned to the Grassfed Exchange Conference in Norfolk, Nebraska last September to research those topics. A priority was hearing Holistic Management practitioner Gabe Brown from Bismarck, North Dakota.

Gabe raises row crops and cattle on more than 5,000 acres. He stressed two points: “Do not till the soil” and “Do plant a diverse mixture of cover crops.” Case in point: his planter’s row marker is deemed too much tillage and 20 species of companion and cover crops are common. Cash crops include spring wheat, winter triticale, oats, corn, sunflowers, peas, hairy vetch, and alfalfa. (See his website at www.brownsranch.us)

Gabe creates surface plant litter to lower soil temperature and feed soil macro-organisms. He does not bale excess warm-season forage and in winter only grazes the top third of the plants; the rest is litter. His mixes can produce 5 to 7 tons of dry matter per acre so this is a major investment in surface residue. This is possible by embracing diversity.

Gabe emphasizes high-diversity mixes and his are typically at least six species. He says the increased seed cost, up $25 to $30 per acre, and management complexity are justified. A diverse mix is likely to contain at least one species that will thrive per location and season. The diversity, abundance, and vigor of the soil’s micro fauna for long-term health and productivity benefit as well.

Diversity also creates management options. Baled forage can be limited because the cows graze hairy vetch and turnips into January. They graze at minimum 9 months in a colder, drier environment than ours in western Iowa. Run at approximately 600,000-700,000 lbs/acre they trample-kill previous cover crop mixes, especially at flowering, to avoid herbicide use. Gabe harvests much of his own seed to control costs.

After trampling the summer forage a fall mix including hairy vetch and winter triticale is no-till drilled into the residue. He notes that livestock classes with low nutrient requirements can utilize high-carbon forage like mature triticale. Gabe rotates through winter paddocks about once per week to avoid soil compaction.

Warm-season mixes are no-till drilled into the winter residue in spring. The cattle usually gain about 2.5-3.0 lb/day on them. Solar-powered gate openers even allow the cattle to rotate themselves.

There are cash crop benefits to Gabe’s system. Commercial fertilizer use dropped by over 90% and herbicides by over 75% in almost 20 years of no-till farming. Corn yields are about 60 bushels per acre above county average with his companion crops of hairy vetch or subterranean clover.

Meg and I hope to tour Gabe’s ranch in the future and we will return to the Grassfed Exchange. www.grassfedexchange.com