Stockmanship Workshop: Can you park a cow?

Though the crowd was small, it was mighty, and became mightier as the day wore on.  Twelve livestock farmers gathered near Exira to learn proper stockmanship from Richard McConnell and Tina Williams of Hand ‘n Hand Livestock Solutions.  The couple is continuing the legacy of Tina’s late father, Bud Williams, a legendary livestock handler.

Over the course of the two-day workshop, Richard and Tina instructed the group on how to “read” livestock and maneuver oneself, to get the animals to go where directed.  The idea is to “let them, don’t make them.”  A person’s attitude shows in their movement and stance, and is detected by livestock.  Armed with the right mentality and knowledge, it’s possible to secure the trust of the animals and to get them to do what they’re asked to.  Richard and Tina shared stories and videos of Bud’s work, detailing what was being done and showing the audience how to work with livestock to obtain the same results.  Who doesn’t want to be able to be able to sort nearly a hundred cows and their calves, vaccinate, and treat them…by themselves?

Proper stockmanship not only eases the movement of cattle between pastures or through a handling facility, it makes the animals happier.  Richard and Tina buy cheap newly-weaned calves at the local auction.  These animals are considered high-risk because of all the recent stresses they’ve experienced, and typically have a high mortality rate.  But these folks bring them home, work them in Bud’s style while they finish weaning, and then return them to the sale barn a few weeks later at an average profit of $10/head.

Two days of lectures, diagrams, and videos can’t be summed up in a blog post.  But some of the recurring themes are:

So how does a farmer get started with stockmanship?  The best choice would be to attend one of Richard and Tina’s workshops, to get the full experience.  But some general guidelines are below.

More specific topics covered were pen and facility design, moving cattle on roads, working with new cattle, weaning, loading and unloading, and sorting stock.  In addition to the examples and general methods in the lecture, Richard and Tina helped with attendees’ specific issues – lagging cows that wouldn’t keep up with the herd, spooky cows that would run away uncontrolled, the challenges of keeping cattle out of neighbors’ yards while moving, and others.

The Hand ‘n Hand method of working livestock is not some claim to “talk” to animals or telepathically “tell” them what to do.  It’s common sense and observation of animal and human behavior, and integration of those behaviors to form a working partnership.  Calm, smooth handling like was discussed does not mean it’s slow either.  The “stressfulness” of handling is the end result of the stockmanship used – not the method of stockmanship used.  What you do with the animals can create or reduce stress, even if the end result (moving them to a new pasture, say) is the same.  Moving them to a new pasture is not stressful in and of itself, just how you do it.  The concept was summed up nicely by a participant of an earlier workshop: “Keep your hat on your head, your hands in your pockets, and your mouth shut!” 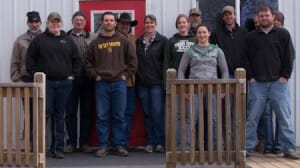