Following an afternoon of learning and discussion at the Iowa Grazing Conference on June 25, attendees and PFI members gathered at Ron Dunphy’s Miller Ranch in Afton for more sharing and observation.  Ron grazes about 200 acres with 30 cow-calf pairs.  His management goals include year-round grazing, preserving and enhancing botanical diversity, and reintroducing quail on the land.

To these ends, Ron rotationally grazes his livestock.  By adjusting the duration of grazing on a given paddock, he controls the animal impact and degree of forage removal.  In addition to minimizing hay purchases, this is essential for quail habitat; the birds require different forage varieties and canopy structures.  For instance, young birds need slightly wider-spaced plants, else they cannot maneuver through the understory.  Weed species provide the nutritious seeds the birds require and attract a variety of insects for feeding.  Slightly more dense forage is needed for nesting, and some downed trees or areas of low overhanging branches provide cover from aerial predators.  A portion of Ron’s farm is full of warm-season annuals and native prairie grasses, a contrast to the brome-fescue-trefoil-clover of the rest of the farm.  Big and little bluestem, coneflower, bundleflower, partridge pea, and others filled the field. 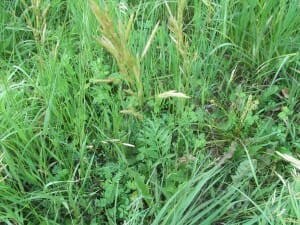 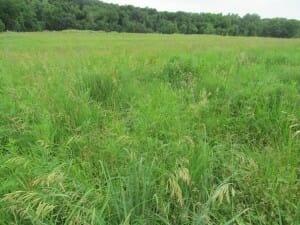 Ron worked in the past with NRCS and DNR personnel to improve the quality of his land for quail.  While reintroduction has been slow – he has faced raccoon problems as well as the challenge of finding any wild quail around – he said that previous DNR reports on bird populations identified some quail in the general area.  EQIP and conservation program funds have helped him get the fences, watering systems, and seedings paid for.

The rest of the farm is more traditionally seeded with cool-season grasses and legumes.  Ron’s management and grazing scheme have allowed him to graze for nearly the entire year; this is one of the first winters he’s had to feed hay, and one of the first springs he’s cut hay.  The flush of wet and warm weather sent his grasses growing far faster than the cows could consume them, so he harvested one of his fields. 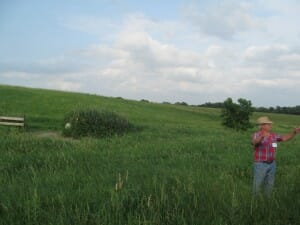 Among the topics of discussion was Ron’s watering system.  A concrete waterer under an insulating soil and forage mound helps reduce energy costs by keeping fresh water available.  Solar panels have not provided him with the power needed to pump water from his ponds, up the rolling hills of southwest IA, and to the fields.  He’d prefer not to have cows walking great distances to get water, so other possibilities were brought up.  New panels or more of them?  What about a windmill?  Different pipe diameters?  A few schemes sounded viable – hopefully in the future we can return and see an even more efficient watering system in place. 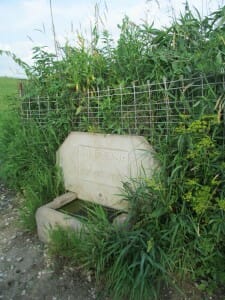 The herd itself was a bit tough to find, hanging out in one of the back pastures.  But with a bit of calling, Ron’s slick and happy Angus-Hereford cows, calves, and bull came by for a hello.  Ron chose his current Hereford bull for his feed efficiency EPDs.  The better an animal can convert feed into muscle and product, the more profitable he is.  Hopefully this will pass onto his offspring and they will bring high returns. 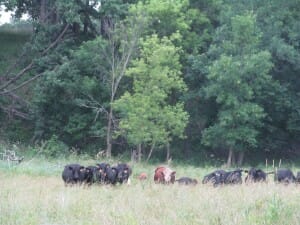 A few of Ron Dunphy's cattle, including his Hereford bull

The farm is a family tradition.  Ron shares ownership with his mother; the land has been in the family for several generations before that though.  Now, his grandson Colton helps him out, along with some other local young men. 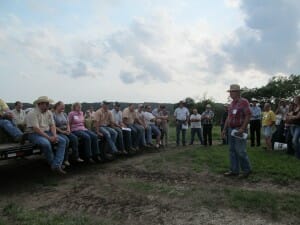 During the following dinner, Ron talked about his experiences with the Tri-County Steer Carcass Futurity.  In this program, producers send their weaned stock to be finished in feedlots.  Their feed consumption, growth, and ultimately their carcass characteristics are monitored and reported back to the farmers.  Through this, producers can compare their animals against others’, access information that may not otherwise be available, and gain access to additional marketing opportunities.  The link below will provide one of the information sheets from the TCSCF, the estimated costs and returns to retained ownership.  Practical Farmers_20130627_151855