Tucked into rolling hills of corn, Sawyer Beef has carved a niche into both the countryside and the Quad Cities’ marketplace.  A visit on July 11 allowed the group of about 20 people to learn why it is called “The Best Beef You Can Bite.”

Neal Sawyer is the fifth generation to farm in the area – supposedly, Neal says, there’s been a Sawyer farming in Iowa since the 1850s.  The grazing has been picking up since about 2008.  While Neal and his father Norman used to graze cow-calf pairs and then finish the calves in a feedlot, customers at the farmer’s market started asking for grass-fed.  After some time, two animals were finished on grass instead, and the meat was a success.  The next year there were six grass-finished animals, and now Neal estimates that the grass-only beef makes up about half of his sales. 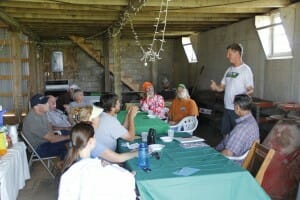 His herd is primarily black Angus, though there are some red Angus and sprinkles of some other breeds, and his current bull is a Hereford.  Neal has focused on finding bulls that deliver small birth weights, so that he never has to pull a calf.  The red influence is part of an effort to reduce heat stress; with some shade-free paddocks and cells and an invasion of endophyte-infected tall fescue, Neal is concerned for the health and comfort of the herd.

Neal employs mob grazing on the farm.  About 100 cow-calf pairs run in cells as small as two acres, depending on the forage quantity and the season; his stockers similarly are given small areas to graze.  The animals are crowded enough to consume or trample nearly all the forage available – but not so crowded that they can’t get enough to eat, and actually can pick off the best parts of each plant.  Frequent movement to new pastures – every 12-24 hours – means they’ll always have fresh forage available.  Neal tracks when cattle move in and out of different cells and paddocks, and thus the rest periods each paddock gets.  Most areas are grazed three times each summer.  He utilizes quick rotations during the spring, when forage is still growing, but then slows the animals down and shrinks the cell size later in the summer when forage is taller.  Neal believes that it’s not a “waste” if cattle trample over-mature forage into the soil – it’s merely investing in soil organic matter and high-quality forage for later.  Between his desire to improve soil quality and his desire to not spend time and money on an old tractor and baler, it works for him.  Cattle also do a good job of fertilizing pastures they graze – particularly when they’re in small cells – but removing a cutting of hay burns fuel while removing nutrients from the pasture.  Similarly, he does not apply any fertilizers or other amendments to the soil.  While he has worked with NRCS to re-seed and improve some pastures, he mostly relies on the seedbank to repopulate areas he grazes. 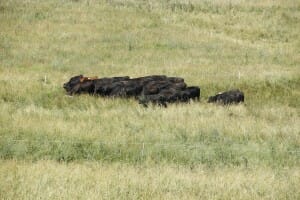 On pasture, the animals are watered from several large stock tanks near hydrants; the tanks are also located such that multiple paddocks can be set up while still having access to the tank.  Except during drought, Neal prefers the cows to be excluded from pond areas, saying that allowing grass to regrow on the banks prevented a lot of runoff and sediment from clouding up the water.

Cows calve between April and June, depending on the year, and calves are weaned the following February or so.  The timing is intended to provide cows with high-quality forage while the calves are nursing – the most nutritionally demanding stage of production – and calves learn to graze from their dams.  Over the winter, cows graze neighbors’ cornstalks.  Setting up small strips allows Neal to control their intake and prevent them over-gorging on fallen grain rather than eating some grain and some husks and stalks.  This lasts often until mid-January; the cows then go on stockpiled forages or pastures with rolled-out hay bales. 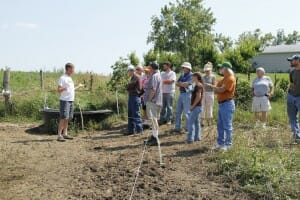 Neal butchers his grass-fed calves at about 24 months and 1000 or so pounds.  He avoids having them processed during the winter, when they’re on hay – he and his customers prefer them to be on fresh forage.  Rather, he’ll process a few extra during the fall months to have enough for winter and early spring – the cost of storing meat in the freezer is a bit less than the cost of buying hay, most times!  Neal estimates that the calves gain about 2 lb/day on pasture, and about 0.5 lb/day on hay during the winter.  This year, he’s trying to weigh calves more consistently to get a better idea of the growth and productivity rates. 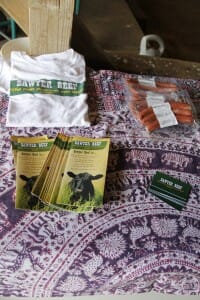 Neal was asked about marketing and pricing.  Customers, he said, have been mostly through the farmer’s market and by word-of-mouth.  While the farm has a website, Neal prefers getting to interact with customers either face-to-face or over the phone, as that has a more human aspect and solidifies the relationship more.  As for pricing, Neal believes that as he is marketing a quality product, he should be paid that way.  Final prices are developed based on knowledge of what he’s offering and knowledge of what the market will bear.

In the future, Neal hopes to spend more time on marketing – furthering lines of communication so that, for instance, repeat customers are told when an animal is going to market so they can request certain cuts.  He also wants to get more data on productivity of his stock.  Another interest is in year-round grazing.  Would reducing herd size be more profitable than growing more calves?  Shrinking the herd reduces demand on pastures enough to have stockpiled forage throughout the winter – saving money otherwise used to buy hay.  But is this more profitable than increasing his stocking densities, buying more hay, but being able to sell more calves?  Time and trial will tell.  All the attendees know is that his shredded beef and sausage sticks were sure worth biting!