I was given the privilege to journey to Sunnybrae Farm in Saskatchewan, the home of Neil Dennis, one of the main speakers for the 2014 PFI Annual Conference.  Along with other professionals and experienced farmers, I saw the power and potential of high stocking density grazing, soil health and forage diversity, and most of all, innovation.  The Dennis family has been on this land for generations (at one point there were more relatives there than in the town itself), and Neil is working hard to keep it productive.

He’s done such a good job, in fact, that he’s got too much free time on his hands –at least according to Barbara, his wife.

It seems like a perpetual spiral.  Neil spends his extra time on an old couch in one of his buildings – it used to house winter-calving cows, until he switched to pasture calving – and thinks.  Particularly when assisted by some adult beverages, he’s come up with brilliant and innovative ways to reduce his workload and improve his farm in terms of efficiency and ecology.  This in result has given him more time to sit on the couch…and so on.

Among these innovations are a series of metal rails welded underneath and in front of his farm vehicles – a small 4×4, a four-wheeler, and a Subaru sidekick.  These rails allow him to drive straight over electric fences rather than mess with gates.  In fact, he doesn’t even have gates on most of his paddocks.  Cattle are given access to laneways for watering by raising up part of the fence with another innovation – a tall pole with a hook on the end to snag the wire – eliminating the need for planning and arranging gates. 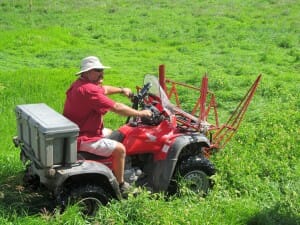 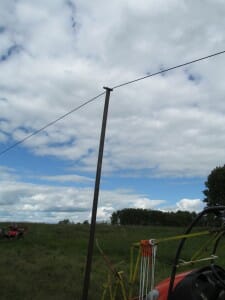 A hook on the end of a post allows the fence to be raised, in lieu of traditional gates

Neil still manages a cow-calf herd on about 640 acres not far from the home farm.  But the bulk of his labor is spent on the 843 stockers he is custom-grazing on about 1000 acres…one acre at a time.  Solar-powered timed Batt Latches spring open onto a new acre paddock every two hours, starting at about 5am and going until evening, when they’re given a larger area, plus the paddocks they previously grazed. 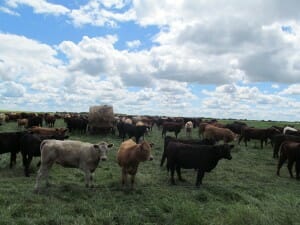 Stocker cattle graze at a stocking density of approximately 630,000 lbs/acre

Remarkably, fence setup for such an endeavor is not that hard.  Neil’s already-tricked-out 4×4 has additional “arms” designed to hold wire reels and pigtail step-in posts.  The reel is set such that Neil can hook one end to an endpost, then drive to the other end of the field while the reel unwinds.  Then it is hooked up at the far end, and Neil makes the reverse trip while setting up the posts.  Sets of 25 – enough to stake out a quarter mile of fence – hang next to the driver’s seat, allowing Neil to remove a post, snag the wire, and stick it in the ground, without leaving the seat and often without stopping fully.  Neil says the 4×4 is not done yet – arms for more reels and more posts are forthcoming. 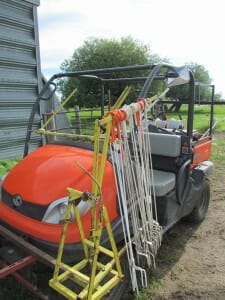 When figuring out the paddocks themselves, Neil originally mapped everything with GPS, but now knows the boundaries of an acre through color-coded tin cans set atop some posts.  Start at one red can and drive across the field to another – that’ll mark one acre from the next set of cans over, which might be blue or yellow.  Certain colors also mark the corners of 10-acre blocks.  Recording the days grazed in those blocks lets Neil track his pasture movements and rest periods.  An adherent to Holistic Management, Neil records where the cows go, and tracks the recovery of pastures with a color-coded system.  A red spreadsheet cell means that it’s too soon to graze; yellow means that more rest would be good but it can be grazed in a pinch; and green means go.  All in all, Neil grazes the entire farm 1.5 times each year – basically, a given paddock will be grazed only once (instead of twice) every two or three years.

So what are these cows grazing?  Neil took over pure crested wheatgrass fields.  He brings up frequently that they’ve failed.  I suppose…crested wheatgrass is in the minority, with bluegrass, meadow brome, and a few others making up the grass portion, specked with healthy stands of alfalfa and cicer milkvetch.  The legumes, he notes, are the offspring of a rare few seedings he made on select areas of the pasture at rates of 1 lb/acre of seed.  Nature did the bulk of the populating.  Failed indeed!  Some quick math towards the end of the day figured that Neil gets between 50 – 60 ADA (Animal Days per Acre). 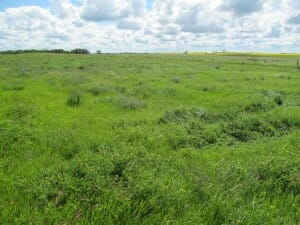 In years past, Neil used bale grazing to rip up, renovate, and rejuvenate worn-out soils.  Such impact is no longer necessary, but all those hooves still turn the soil well and trample unconsumed forage into a thick mat.  Better forage growth and soil health have improved his yields and carrying capacity, and also reduced his mineral consumption.  In two months, those 843 steers have consumed only 13 50-lb bags of mineral…less than an ounce each day per animal.

More went on than this…cutting soil plugs and observing the thick mat of root mass and litter above crumbly dark soil, Brix tests revealing sugar values as high as 20 (where 12 is considered quite good), and Neil’s surefire method of training new calves to electric fence (it involves beer cans).  I won’t spoil everything though…be sure to listen to Neil at the next Annual Conference in January 2014, or if you can’t wait, attend the Grassfed Exchange conference later next month. 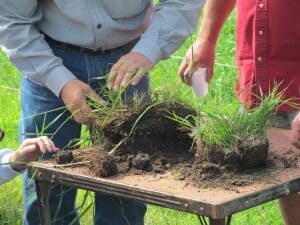 A sod plug from under a bale-grazed site (left) and a less-impacted site (right). Note the thick mat of dark organic matter where bale grazing occurred.