For once, the lack of rain was welcome, as nearly 40 people gathered at the Anderson farm in Cherokee. Nathan, his wife Sarah, father Randy, and other family members raise beef cattle and field crops. The cow-calf herd is primarily grass-based, with finishing animals getting a bit of grain to put weight on quickly. Crops are no-tilled, and the Andersons have utilized cover crops both for the soil benefits and as forage for the livestock.

Nathan has been farming since 2005, but really took some leadership in 2010 after graduating from Iowa State. Some of his (and the family’s) major projects include pasture management and improvement, getting the right genetics into their cowherd, and reclaiming land lost to cedar encroachment. His herd of about 22 cows and calves rotationally grazes about 65 acres of pasture, which he has worked to better through the animal impact and re-seeding. 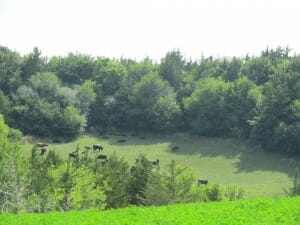 The cedars are a major nuisance, as they spread far and fast. They tend to damage the land around them as well, as the fallen needles make the soil somewhat acidic. Thus in addition to cutting them down, time and management is required before the soil is productive again. Nathan recommends red clover – it can handle slightly more acidic soils than some of the other legume species – and it can be easily frost-seeded. After a few years, nitrogenous exudates from the legumes help balance soil pH and grasses can more easily return. Nathan isn’t about removing all the trees, however. He has some areas with burr oaks, which with management will provide some savannah-like areas for grazing. 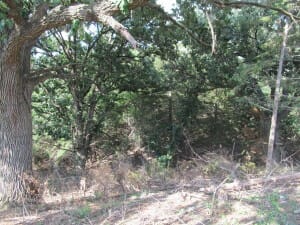 Some of the land that has been cleared of cedars.

Drought and water access remain challenges for the Andersons. While a stream runs through the property, it has been reduced to a few stagnant puddles since last year. This has cut off about 30 acres of grazing ground. Nathan also showed one paddock which had been hayed in early June; now over two months later, regrowth was minimal. “We’re not as far out of the drought as people might have thought,” he remarked. Best guesses were that the subsoil never got fully recharged with moisture, despite the heavy rains earlier this year. Forage growth was great in the spring when there was moisture and cool weather – many people agreed that they had more grass than they could eat at that point – but since then there hasn’t been enough to maintain the forage. An adjacent paddock to the hayed field, which had only been grazed, showed much more regrowth. Attendees speculated on the differences between grazing and haying, how grazing returns a lot of the nutrients and moisture to the soil through manure, and the implications that seems to have for forage regrowth.

Nathan’s knowledge of his pasture comes not just from looking around and remembering from year to year; he is an on-farm research cooperator with PFI in the pasture monitoring project. He and Margaret Dunn explained the process for checking various pasture characteristics in a scientific way. Nathan has set up several transects on his farm, each 100 feet long, and each on a representative area of land. The group saw one that was on a side hill in a mixed grass-legume pasture – a situation common to several of his paddocks. At least once a year, at the same time each year, Nathan picks four measurement sites. He marks out a site with a 20×20 inch wood frame. In that frame he identifies the different forage species, estimates the percent of forage-covered, litter-covered, or bare ground, notes the development stage of the forage species, and whether there are worm casts, dung beetles, or other invertebrate species of interest. Over the years, this information will show whether his pastures are changing in diversity, harboring more beneficial insects, and becoming more productive. Margaret added that harvesting and weighing the forage mass in those sample sites allows estimation of forage yield for that paddock. 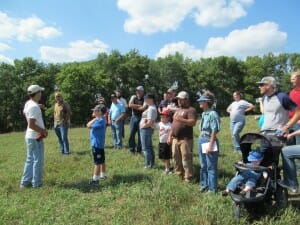 Nathan took the group to the section of pasture that hasn’t been grazed because of limited water access. While a challenge to the farm in terms of managing the animals, the pasture itself seems to have benefited from the rest. Warm-season native plants have cropped up, truly a neat sight. In future years it will be fascinating to see the change in species composition, both here and in nearby paddocks. Seeds spread by birds, wind, or even cattle may shift the pastures elsewhere.

Another bother this year has been pinkeye, and Nathan asked the crowd for insights and similar stories. After some new heifers were brought into the herd, he opted to vaccinate all the animals for pinkeye as a precaution. This year he’s had to treat a quarter of his calves, despite having treated back rubbers near the mineral block. He notes that flies are bad this year. Hot and dry weather sometimes reduces fly counts as the eggs are baked in cowpies; however, that same hot and dry weather has prevented him from rotating his cows to new paddocks as fast as he’d like – so the flies can follow the cows more easily. The group discussed various treatments and debated how strict culling should be. Some said that letting the animals be is best; others offered some medications, both homeopathic and conventional.

Nathan also discussed his breeding and marketing strategies. Right now his cows are at least ¾ Angus, with some other breeds making up the balance. He’s aiming for smaller frame scores right now, noting that his current bull is a bit on the big side. Calves are weaned late on his farm, and finished with a bit of grain in the ration. They’re marketed at about 17-18 months of age, and Nathan primarily direct markets wholes, halves, and quarters. He’s found that giving some beef as gifts and making sure people share the farm name around has really helped increase his sales.

In addition to being an on-farm researcher, Nathan and Sarah completed PFI’s Savings Incentive Program (SIP). Nathan and his mentor, Dan Wilson, elaborated on the idea. A beginning farmer – someone with some experience but who has been full-time farming for less than five years – is paired with a mentor, typically in the same geographic region and with similar enterprises. The mentor serves as a resource and accountability partner; the beginning farmer meets with them twice, attends several PFI events, and has to complete a business plan. The beginner also aims to put away $100 per month into a savings account. At the end of the two years in SIP, PFI will match up to $2400, giving the beginner a total of $4800 towards the purchase of working farm capital – equipment, watering systems, cattle, seed, etc. 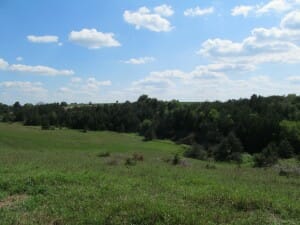 Hillside pasture at the Andersons'.

The field day ended with an Anderson beef burger dinner prepared by Sarah and Nathan’s mom and sister. A group of farmers – many SIP members, starting out on their full-time farming journey – discussed their plans and some common challenges in agriculture. All noted the importance of open discussion with family members regarding farming and the future of the family farm – fortunately, those attending have families that are receptive and willing to work the new generation in. Nathan noted that the mentality of agriculture is changing, from the need to get as much yield and productivity as possible out of the land as fast as possible, to the idea that it’s not just about now, but about the future. Farmers need to manage the land such that they and their children and grandchildren can come back to it. Practical farmers are leading that charge.