Dirt: The Erosion of Civilizations 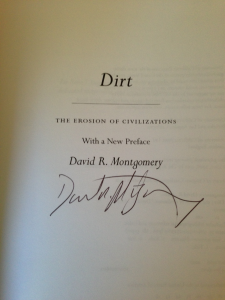 David Montgomery, author of Dirt: The Erosion of Civilizations, spoke on the Iowa State University campus on Monday evening (September 23rd), the keynote lecture of this year’s John Pesek Colloquium on Sustainable Agriculture.  Dr. Montgomery’s book, published in 2007, is as relevant today as it was then and is especially appropriate for Iowa, where agriculture is the predominant land use.

Trained as a geologist, Montgomery takes a scientific approach to investigating the natural phenomenon of erosion and the implications for agriculture. He asks: What role does soil play in the longevity of civilizations? Could agricultural soil erosion limit the lifespan of a civilization?

Soil is the skin of the Earth; serving as the gateway between the living and the non-living, the interface between geology and biology. “The
Wearing a white suit coat that matches his trim white beard, Montgomery explains that agriculture’s impact on soil can be simply described in one of three categories: building soil, storing soil, or losing soil. Of the three, only building soil is a sure pathway to longevity for a society.twin problems of soil degradation and erosion have plagued humanity since the dawn of agriculture,” Montgomery says. “Although these problems are mostly of our own making they are also well within our power to solve,” he adds.

Losing soil is a patently unsustainable relationship. Where human activities lead to the loss of soil, it is a matter of when, not if, a time will come where food production is no longer possible. Even in pla

ces with naturally rich reserves of soil—say ½ meter to a meter thick—a 1 mm loss per year will end in ruin within 500 to 1000 years. In Iowa we typically lose more than a millimeter annually, and have lost over half of our topsoil in 150 years of plow-based agriculture here. How long before soil fertility and our agricultural traditions are compromised depends largely on how we practice agriculture in the future.

Storing, or maintaining current levels of soil, is a better situation than losing soil, but this balance is a precarious one.  Montgomery explains that many of the societies that have failed as a result of agricultural erosion haven’t necessarily lost their soil.  What frequently happens is that the soil moves on the landscape, primarily from hill tops and slopes, and settles in the flood plain.  The overall quantity remains the same, but there is a dramatic decrease in arable surface area, which ultimately compromises agriculture.

Side Note:  Following the lecture in the Great Hall of Iowa State’s Memorial Union, I sought out an ISU soil scientist in the packed hall. Many of the hillsides in Iowa are on the verge of having lost all their topsoil—he described to me—the layer below, the B-horizon, the sub-soil or non-organic soils are now exposed. As this layer moves downhill with further erosion it is burying the good soils below – a double whammy for agriculture.

By now the lecture hall is quiet.  The fast paced, punctuated and noticeably well-practiced delivery is painting a pretty bleak picture. The images projected on the large screen—fallen cities, scarred hillsides and the requisite line graphs—all strengthen a mental picture of calamity.  Dr. Montgomery explains that in his research he has observed that societies don’t get a second chance at agriculture.  Once soils are gone from an area, they are gone for many human generations.  Collapses of societies as a result of erosion, such as the collapse of Classic Greece, are frequently followed by Dark Ages, times when human populations plummet.

Neolithic Europe, Rome, the ancient Native Americans of Cahokia… history repeats itself. So what does that mean for our future? 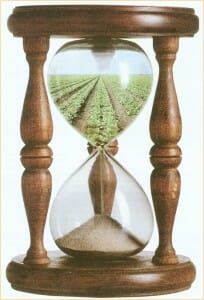 Much of agriculture practiced in the United States and Iowa today is a soil losing proposition, as evidenced by our “allowable tolerable loss limit” of 5 tons of soil per acre per year—a number that we use as a benchmark for success, but one that represents a rate of loss that greatly exceeds the rate of soil generation (by an order of magnitude).  However, Montgomery proclaims in the first upbeat pitch in a dozen minutes, “this problem of agriculture is not because we farm, but because of how we farm.”  So, all of this doesn’t mean the end is near, or even inevitable.  Indeed, Iowa is blessed with some of the richest, deepest, soils in the world; our soils are very forgiving.

Montgomery figures we’ve got a few decades (but less than a century) to change our ways; to turn agriculture into a soil building relationship with Earth.  However, he reminds the increasingly hopeful audience that in the geological timescales he likes to think in, “a couple decades means now!” The first step is to confront the issue. “Soil degradation is an under-appreciated crisis,” he laments.  Degradation of our soils is every bit as serious and imminent a threat as any number of geopolitical issues we are concerned with these days, he relates.  Where there is soil erosion, “changing agricultural practices should not be a controversial topic.” Society should embrace ideas of sustainable, or conservation, agriculture.

There are fewer examples of soil building societies, but they do exist.  The Dutch have built their agriculture from reclaimed sea floor. Pre-Colombian Amazonians built Terra Preta, a rich and fertile soil of entirely anthropogenic origin. Where it happens, society as a whole has made the conscientious decision to align behind this common purpose.

Contemporary agricultural and soil science has armed us with all we need to know to do better here, today.  Cover crops, diverse crop rotations and no-till are examples of “conservation agriculture” practices that Montgomery suggest are a step in the right direction. Bare soil is wide-open to erosion, and keeping it covered is the first order of change.

Positive change isn’t restricted to practices on the ground; all facets of society have a role to play. Dr. David Montgomery doesn’t pretend to have all the answers. But on stage and in his recent book, he combines keen interests in geology and human history in a matter-of-fact delivery of an urgent message—a message of hope for those that choose to hear it and a warning for those who do not.