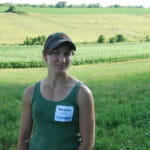 People work at Practical Farmers of Iowa, in part, because they are curious folks! So we have organized a mini-lecture series, where, each week, a staffer enlightens us on a particular topic. Livestock Coordinator Margaret Dunn was the presenter this last week, and here’s what she had to share:

Livestock Production Cycles
1. Cattle
a. Terminology
i. Cattle – collective term for members of the bovine species
ii. Cow – general term for a bovine, but specifically, a female who has had a calf
iii. Heifer – young female who has not yet calved; however, one might hear the term “second-calf heifer” referencing the idea that these females still have different nutritional needs, as they’re still growing and aren’t to mature size yet
iv. Bull – intact male
v. Steer – castrated male
vi. Calf – baby cow (male or female)
b. A cow gives birth to a calf after a 283-day gestation (~9 months). Generally, the calf will nurse for 205 days (the “conventional” standard); this will be shorter for dairy cattle (bottle-raised for ~30 days) and often longer for grass-based cattle (anywhere up to a year).
i. Heifer calf (for breeding herd): after weaning, she’ll be grown up to at least 75-80% of her mature bodyweight, at which point she can be bred. Conventionally, this takes until after she’s a year old. Grass-based cattle may take 2 years because of slower growth rates.
ii. Bull calf (for market): castrated either at birth, at weaning, or even later (generally not recommended for safety reasons and for risk of breeding relatives, or breeding someone when it’s not the right time). Depending on management, fed steers can be ready for market at 12-16 months (if on concentrate) but may take up to 2 years under lower-energy rations (grass-based).
c. Timing: depends on the manager. There are a few “typical” schemes though:
i. Spring-calving: cows calve anywhere from Feb-May. This means that the cow (who has low nutritional requirements during pregnancy) consumes relatively little feed during the winter (winter feed is the greatest expense in a cowherd). Then when her nutritional requirements increase for lactation, the grass is starting to grow and is at its most digestible (May/June/early July). Cold and mud are concerns for calf health, and heat during late summer/early fall may make re-breeding difficult.
ii. Fall-calving: cows calve anywhere from Aug-Oct. This allows the high-quality forage from the spring and summer to go to finishing animals or replacement heifers, or can be used to bring the cow back up to a good body condition before calving. There is less of a mud issue, though heat can be a concern. Adequate winter feed is necessary for the lactating cow and growing calf, both before and after weaning.

2. Sheep (and much is similar for goats)
a. Terminology
i. Ewe – female
ii. Ram – intact male
iii. Lamb – baby sheep; in terms of meat, “lamb” indicates iv. Wether – castrated male
b. A ewe delivers 1-4 (usually) lambs after a roughly 150-day gestation (5 months). Lambs nurse for anywhere from 1-3 months, depending on management.
i. Ewe lamb (for breeding herd): after weaning, she’ll be grown to ~75% of her mature weight before breeding. Generally this takes 7-9 months, but may be longer for grass-based systems.
ii. Ram lamb (for market): may or may not be castrated, depending on market preference. Can be sold as a young lamb or finished out to a greater weight. However, sheep meat is considered “mutton” once the growth plates in the lower leg fuse; the standard is that at 12 months the animal is no longer a “lamb.”
c. Timing: sheep are typically short-day breeders (breed in fall to lamb in spring), but some breeds will cycle year-round and can be used for “constant” lamb production. Spring-lambing is advantageous in that many ethnic holidays are in the early spring, which drives up demand for young lamb. Later spring lambing follows the forage growth cycle, as mentioned for cattle, so reduces feed costs. Fall lambing is easiest for lambing on pasture and also takes advantage of the forage growth cycle, but breeding is often a challenge. Some systems (such as the STAR system by Cornell) feature multiple lambing seasons within a year, to ensure constant supply of product, reduce the labor required at any given moment, and to increase flexibility.

3. Poultry
a. Terminology
i. Hen – adult female chicken or turkey
ii. Rooster – intact male chicken
iii. Tom – intact male turkey
iv. Capon – castrated male chicken (yes, this happens, but no, it’s not common)
v. Pullet – young female chicken
vi. Jake – young male turkey
vii. Chick – baby chicken
viii. Poult – baby turkey
b. A single egg grows and develops within the hen for 24 hours before being laid, and after being laid, takes 21 days to hatch in chickens, and 28 in turkeys.
i. Egg chickens: pullets will start laying at 16-20 weeks of age (dependent on breed), and will lay just under an egg each day for about a year (again, breed-dependent). Commercially, hens are slaughtered at 16-18 months (once egg production drops significantly). Under artificial lighting, they will lay year-round; under natural conditions, they’ll slow down during the winter.
ii. Meat chickens: in concentrate-fed situations, they are fed to market weight at 5-6 weeks of age. This will take longer on pasture (up to 12 weeks).
iii. Turkeys: in concentrate-fed situations, will reach market weight in 10-18 weeks, depending on target market. Hens are most often the “butterball” or whole turkeys at the supermarket; toms/jakes are more commonly further processed.
c. Note on feeding. Chickens cannot digest grass well – so while “free range” or “pastured” chickens will consume some forage, they still must have adequate concentrate-like feeds to meet their nutritional needs. A truly free-range chicken will be eating some grass/plants, but also seeds, fruit, insects, mice, snakes, etc to get the calories it requires in a form it can digest.

4. Hogs
a. Terminology
i. Sow – adult female pig
ii. Boar – intact male pig
iii. Gilt – young female pig who has not given birth
iv. Barrow – castrated male pig
v. Piglet – baby pig
vi. Pig – generic swine term; more specifically, a younger animal
vii. Hog – generic swine term; more specifically, an older animal near to finish
b. A sow delivers anywhere from 8-16 piglets (very breed-dependent) after a gestation of ~113-116 days (3 months, 3 weeks, 3 days). Piglets are conventionally weaned at about 2-3 weeks of age (10-20 lb) and enter the “nursery” stage until they weigh 20-60 lb; they then go onto the “grow-finish” stage.
i. Gilts (for breeding herd): generally maturity is reached at 32 weeks (~7-8 months). Sows can have roughly 2 litters per year and restart estrus shortly after the previous litter is weaned.
ii. Barrows (for market): fed out until about 240-270 lb (breed- and management-dependent). Management style dictates how long this can take; 5-6 months conventionally, but much longer if they are managed on pasture.
c. Because most hogs are farrowed indoors and the gestation length is relatively short, breeding and farrowing can occur year-round. In conventional systems, weaned piglets are moved from the farrowing building to a separate nursery, so the cycles can restart quickly. Farrowing on pasture requires proper timing (piglets are very cold-sensitive).
d. As with poultry, pigs cannot digest forage very well, and derive limited benefit (in terms of protein or calories) from eating hay or grass. Thus even “pastured” pork needs either concentrate supplement, or a supply of highly-digestible feeds (fruit, nuts, grains, roots/tubers, etc).