One Man’s Meat: A Tribute to Dan Specht 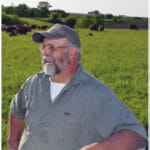 Dan Specht, a farmer, conservationist, and beloved member of Practical Farmers, died this summer, crushed by a bale while moving hay for his cattle. He left behind hundreds of friends, family, and admirers, and also boxes of beef. I bought a couple of those boxes, and soon schemed up a way to honor Dan’s memory: gifts of meat to a chosen few who are continuing his work for an agriculture that is good for people and for the land.

I put a couple packages of minute steak in the vegetable box I returned to one of “my farmers,” Julia Slocum of Lacewing Acres. Julia is a beginning farmer growing vegetables, Dan’s product was beef, but both faced that uphill battle of farming profitability without government support. (Why is it so hard to make a living simply growing our food?)

I dropped off a roast with Matt Liebman, a professor at Iowa State University. Dan worked, as Matt does, to implement a vision of an agriculture that would ensure our future. Both delight (delighted) in the complexities of ecology as a model for agriculture and lamented the ignorance and lack of respect for the soil that we wash away at our peril.

Rick Exner got a roast for his musical talent, which he displayed at co-founder Dick Thompson’s funeral, also this summer. Dan so enjoyed music (and the beer that often went with it). At a memorial concert held for Dan last weekend, musician Jon Stravers said that Dan had been the band’s best fan. I thought the same thing about Dan and PFI as well—there was no one who came to as many events.

PFI staffer Tomoko Ogawa accepted a gift of Dan’s steak. As the PFI staff cook, she does her best to honor farmers through preparation of their food. Plus she wrote the most poignant tribute about Dan after his death. Says Tomoko: “Dan also always asked me for advice about how to cook a meal for his field day. I’m sure he cared and loved good food and drink, but I think he was doing this in part because he knew that food was the language I feel fully competent to speak. He had that kind of genuine sensitivity and kindness.”

The last of gifts, bones for soup, were delivered right out my backdoor, to my dogs Liz and Maggie. What can I say? They gnawed away on the bones for hours, and I’m sure appreciated the gifts most of all.

One man’s commitment and intelligence.

One man’s kindness and legacy.