The wrong weather at the wrong time 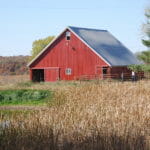 PFI member Matt Russell recently shared his experiences with volatile weather at a hearing on Capitol Hill in Washington. He gave us permission to repeat his remarks on our blog:

My name is Matt Russell. I’m a fifth generation Iowa farmer. I’ve been involved in agriculture my entire life   starting with my parents’ farm in Southwest Iowa then building a career educating about and advocating for   agriculture and buying my own farm in 2005 that I co-own and operate with my spouse.

Here’s a quick history of what climate change looks like in Iowa. We had historical flooding in 2008—the       500-year flood. And again in 2010 we had another series of 100 year floods. Then in 2011 the Missouri    River wiped thousands of acres of farmland off the map. Some of that highly productive farm ground will  never be farmed again. Then we shifted gears into the catastrophic drought of 2012. So in half a decade,  Iowa saw some of the worst flooding and the worst drought in over a century of keeping  records.

Climate scientists have told us this is what climate change will look like and it is going to get worse and more extreme. And so we have 2013. Let me share with you what life has been like on our farm this year. The first record we set was the May 4th snow storm. It was the worst blizzard on our farm in two years. We had a foot of heavy, wet snow. We lost power for 36 hours. We had to put hay out for the cattle and we had to run the generator to heat what has always been an unheated cold frame building to keep the tomato seedlings alive. It started snowing on the 3rd, and as I was walking out to check on the cattle that night I was trudging through 4 inches of snow and hearing the frogs in the pond. I remember thinking this is really strange. I suppose there’s someplace in the world where there are frogs in the snow, but not in Iowa. This is one of the things climate change means–the wrong weather at the wrong time—in other words, this blizzard resulting in the most snow ever recorded in Iowa in May.

Then it set to raining—the most rain ever recorded in the month of May in Iowa.

Then it shut off. And we’re back into drought. Last month was one of the driest Augusts on record—even drier than during last year’s epic drought.

Oh, I almost forgot, July was one of the coldest on record. There were places in the state that recorded low temperatures in the 30s in July.

And now we’re experiencing one of the hottest Septembers on record. The hottest days in 2013 in Iowa came after Labor Day with multiple days above 100 degrees.

The joke is since February came in May along with all of the rain for the summer, and September came in July, and July came in September, what month is going to show up in October?

There are still people who deny climate change. And some of the loudest voices of denial have come from the agriculture community. There may be some farmers out there who are still denying climate change is happening, but trust me, none of them are ignoring it. They are putting in tile like crazy to deal with more extreme rainfall events. Contractors, putting in ponds and digging deeper wells, can’t keep up with the demand as farmers deal with repeated and longer lasting droughts. Farmers are buying more crop insurance to deal with the extreme weather and more frequent crop losses. Livestock producers are downsizing or completely liquidating because they can’t find affordable feed. In Iowa we had nearly 800,000 acres of prevented planting because of flooding. And in many places around the state they are looking at about a third of a crop of soybeans because of the drought. And some of these fields, unplanted because of flooding and burned up from drought are sitting right next to each other.

Climate change is real, it’s happening, it’s going to get worse, and it’s already causing great harm to farms like mine.

But American farmers aren’t just victims here. We can be part of the solution. The answer is uncomplicated, although not easy. We need to stop putting carbon into the atmosphere and we need to start pulling it out of the atmosphere and putting it back in the ground. This is something American farmers like myself can help do. We’ve put land into productive forages. Farmers are starting to get fired
up about cover crops. Farmers can’t choose whether or not to deal with the consequences of the droughts, cold, heat, and floods of climate change. But we do have a choice when it comes to being part of the solution. I speak for a lot of American farmers when I say let’s stop wasting our time debating the existence of climate change. We need to use our time and money to find ways to protect the climate we depend on. Time and again, American agriculture has led the world in solving big problems. It’s time we
put our shoulders to the wheel to help solve this one.