The last in a series of joint PFI-ILF cover crop field days was held on November 19 at Fred and Vicki Abels’ farm near Holland.  About 30 attendees joined PFI and ILF staffers Margaret Dunn and Liz Juchems for some good food, good conversations, and good farming.  The Abels have been farming their land for years using row crops and beef cattle, with hefty doses of common sense, environmental consciousness, and flexibility. 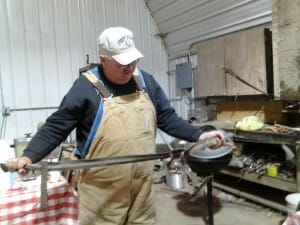 Fred Abels shows the “belt” he made for setting posts, featuring a large hook for holding step-in fence posts and a loop for his hammer.

As Fred explained, he’s tried a number of cover crop varieties, seeding methods, and schemes; and seen varying results.  In the past he’s used mixes – oats, radish, rye, wheat – as winter forage for his fall-calving cowherd.  He recounted how the weather occasionally messed with his plans and designs: too warm, too cold, too dry…it might seriously impact the establishment and growth of those covers.   Starting in 2004, he also started feeding standing corn to his cattle.  In some of the closer fields to the house, he split the corn into smaller parcels with electric fence.  Every day, the cattle get access to the next strip.  A video produced by Iowa State showed him installing and rolling up fence, and most of all showed the cows plowing into the next strip, eager for the goods.  Within 10-15 minutes, the cows were cleaning up the grain and ears.  Within the first half hour they’d also started taking care of the leaves and husks.  Over the next 24 hours they’d also eat some of the stalks, while trampling the rest into mulch and adding manure.  Having limited access to stalks ensures that the cows will consume both the grain and the more fibrous husks, balancing the diet and preventing acidosis and other digestive upsets.  In the meantime, it takes fairly little time to move the cows, especially with some of the innovations Fred’s developed, like belt holsters for step-in posts and end posts that don’t need to be hammered into the ground.  Keeping management simple is one of the key components of Fred’s scheme.  This year he also had a neighbor chop silage on some of his acres, though he’s still got some standing corn for grazing. 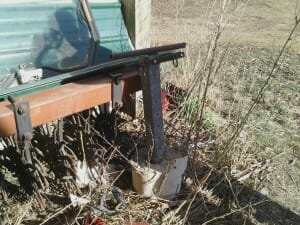 Why deal with hammering endposts into frozen ground? Fred filled flowerports with cement and inserted a wood or metal post from which to attach reels and fence.

Kathy Kucera of Mid-Iowa Cooperative, Fred’s crop insurance agent, also came to speak on some of the changes and challenges with crop insurance surrounding cover crops.  At this point RMA has still not set their rules and regulations for the new year, but those should be coming soon.  But, as of now, crop insurance guidelines are changing a bit.  In the spring, depending on location, cover crops either need to be terminated the day of planting or 5 days after planting the cash crop…but always, before emergence of that cash crop.  This is more flexible than in past years, where a flat date was set by which termination had to occur.  Cover crops can be grazed fine in the fall, and in the spring as well, though there are some considerations on just how and when grazing should be used.  Haying or ensiling, meanwhile, is less certain; there is some suggestion that the forage harvested will be the first crop and the subsequent cash crop will be a second crop.  Kathy mentioned that it’s important to discuss what you’re doing with your insurance agent. 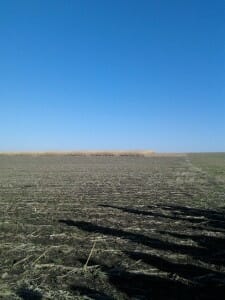 Not the thickest stand ever, but Fred’s cover crops will provide some soil- and snow-catching ability now, and may be grazed in the spring. In the background, standing corn will be grazed by the cows over a few weeks.

The group toured where Fred had drilled some cover crops after corn silage harvest.  While there hasn’t been a huge amount of growth, the plants have established, and a few attendees noticed a number of seeds lying around that might contribute to biomass next year.  Depending on growth, Fred might graze the cover.  One of the recurring themes of the day from Fred was to adjust to how things panned out.  If one crop doesn’t grow well, the plan changes a bit – the crop might be harvested differently, sold differently, and that might change planting next year.  When hay became limiting, the cowherd was culled to reduce the feed demand.  So as far as these cover crops go, while great establishment and a great stand would be awesome, the Abels will adjust and keep on going no matter what.