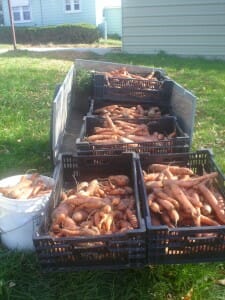 The upcoming theme for the Practical Farmers of Iowa (PFI) annual conference (January 24-25, 2014) is Well Grounded. Here is a short reflection from this past growing season that connects with the theme.

When the growing season started this spring, I wondered if I would harvest any crops with the amount of rain I was receiving this year. But one hopes and continues to plant though it is tempting to give into despair.

I lost virtually all of my garlic crop to yellow asters disease. My potatoes were planted in a slightly low lying area so I thought I would lose them all and nearly did. Sweet potatoes too were planted in muck and that pretty much described the harvest: mucky, yucky the worst ever for me. I kept planting my carrots though and decided after two years of disaster of poor germination due to heat in July I planted my fall Bolero carrots early in late June and beginning of July. Sure enough I had good stands.

Who would have thought that someone would be turning off the faucet? From mid-June to mid-August. not a drop of water fell on my parcel of land here in central Iowa? Yet the carrot tap roots kept going down and down for that moisture in our beautiful 4-5 feet of top soil. I have pulled out tap roots in the past that were 5-6 feet long! My organic soils have 6-8% organic matter and certainly that makes a difference for the top foot of soil. With one inch of rain in August and another inch the second week of September, then a few more small rains at the beginning of October my carrot crop not only survived, but thrived. I had one of the best carrot crops in my limited history here both in abundance and quality.

While on some level I consider it a miracle I do know that years of improving the soil makes a significant difference. It also proves that when one is well grounded/deeply rooted in place it is easier to survive the dry times in one’s life.

Gary Guthrie, “The Carrot King” has farmed fresh vegetables at Growing Harmony Farm for more than 18 years near Nevada, Iowa. He first joined Practical Farmers as a whole farm member in 1995 and renewed as a lifetime member this September. 2013 is his final season growing food commercially. Follow his blog on food, faith, and farming at http://garyguthriethecarrotking.blogspot.com/