Farming with “The Source”: Thompsons’ Alternatives in Agriculture 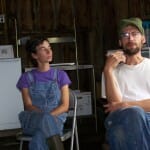 When Teresa asked me to speak at Dick’s tribute, I availed myself of email’s greatest feature. I did not immediately reply. I spent a lot of time out in the field wondering how Dick’s research influenced my research. I kept asking myself what does pre-plant cultivation effects on broadleaf weeds or what does corn yields following hay vs. soybeans have to do with my farm? I wondered this as I hoed lettuce and trellised tomatoes. Then I thought of my farming manual – which I’ll get to later – and came to this conclusion. The research on my farm was not so much connected to Dick, but how I farmed was.

First, I should say I was less close to Dick than many people in this room. I was introduced to him as a student. I was in Iowa State Agronomy in the late 1980s and felt frustrated. I was “locked in the cow yard” as Dick describes. I happened upon a PFI tour that included the Thompson farm and while attending, generally asked foolish, self-serving questions to draw attention to myself. Fortunately, the last time I really talked with Dick was at my daughter’s baby shower, where he gave me the gift of an encouragement that I’ll keep to myself and will always hold dear.

But back to Teresa’s request. I felt confident to say either I farm the way I farm because of Dick’s experience and influence, or I was inclined to share his opinion on certain subjects already, but was given courage through him and other PFI members to practice them on the farm. How do I know this? Let’s go to the source.

The answer lies here. In this book, “Alternatives in Agriculture”. This book is the annual report of on-farm research at the Thompson farm. I have the 1996 version. In it lies their cumulative research on fertility, cover crops, weed management, crops, soil and water, economics and livestock starting in the late 1960s.
But the important and influential part of this book for me is not the research results per se. The important part, for me, is the introduction, the first chapter and the last chapter. In these sections, there are no replicated strip trials, but there lies a de facto farm manual. I encourage you to get one. This manifesto of guiding principles tells what integrated, or sustainable agriculture is, why it is important and how to do it – no matter what crops you raise or what your role in agriculture. The advice is timeless, simple, humble and practical. I encourage you to read it and reread it and reread it.

And even though it is short and simple, I could not, in the time allotted, comment on all the advice contained within that has influenced our farm. However, I can provide some examples of the principles contained that reflect our work.

Dick spoke of a ‘giving principle’ in which we should be ready to give to the land rather than take from the land. He said, “The giving principle is a higher calling and contrary to the normal thinking of the day.” He said, “The first priority is stewardship of the land…”.

This concept can be seen in our ratio of uncultivated land in relation to our total land base. Roughly, only one third of our farm is cultivated. One third is apportioned to the household, buildings and barn yarn, one-third is dedicated to habitat. A third for crops, a third for people, a third for nature. The ‘for nature’ portion is left for habitat for beneficial insects, pollinators, birds, amphibians, mammals and other animals. We plan for improvements in this habitat on an annual basis. We do this through timber stand improvement – planting and selecting for nut bearing hardwoods. We have increased the fruit bearing shrubs by planting native cranberry, elderberry and dogwood. We have reintroduced native grasses and forbes.

It has served us well. We have few peaks in pest populations and we enjoy our farm for its beauty and complexity. We have virtually no soil loss to wind or water.

Dick said have a cheap input policy. He said, “Agriculture business was properly named because it sure has given grass roots agriculture the business.”

Even for our cultivated fields, we leave 10-15% fallow on an annual basis. This allows for extensive cover cropping, starting with an early, aggressive legume, followed by a warm season cover such as buckwheat or sorghum Sudangrass and ending with an oat/pea or rye/vetch mix. Most production fields also receive one cover crop treatment at some period of the year. We purchase no input fertility products. We also do not use herbicides for weed control, but control weeds through timely management with mechanical cultivation and weed suppression from our cover crop rotations.

It has served us well. Our organic matter content runs around 5%, sometimes more, it is nearly three times that of neighboring fields. Analysis indicates well over 100 lbs of usable nitrogen per acre is gradually released from it throughout the growing season.

Dick promoted the incorporation of livestock to recycle on farm nutrients, reduce input fertilizer, increase crop rotations and spread labor more evenly. He said, “Including the cow in the farm operation keeps the farm and community in balance.” That is if the livestock operation matches family labor resources and is dry bedded to limit its size.

Our ‘cows’ are a small laying flock from which we incorporate manure in conjunction with the green manure crops.

It has served us well. Our total costs for fertility – the cost of cover cropping and spreading, is less than 1% of total farm expenses.

Dick said we need to become more self-reliant, make better use of what we have; don’t use credit unless absolutely necessary.

These concepts can be seen working on our farm. For example, we chose early on to cash flow all costs except our land, which we paid 50% down. Instead of razing the old hay barn, we spent seven springs and falls straightening, repairing and painting it ourselves, restoring it to a sound, beautiful condition that is now both useful and productive. Our newest tractor was made in 1960. It works well. It is the right size.
Dick said we are plagued by a want for ease. We are conscious of this phenomenon. We often forego a machine if its value is mostly for ease. Would a farmer hand dig a trench for a 145 foot electric line if the return to labor was similar to the trencher’s rental cost? We have. Would a small farm push a planter, rather than buy one for the tractor, for the same reason? We do.

Dick says agriculture has lost its restraints. That the push for more and bigger has a high cost to our spirits, other people and communities. Dick asks, “What a farmer won’t do to beat his neighbor by one bushel per acre!”

Our farm is no different to these temptations. We have somehow resisted or avoided the numerous opportunities to expand into seemingly endless markets and enterprises, to buy larger equipment, to use more land. Somehow we have kept our decision making process slow and careful.

This has served us well. It has allowed us not only to avoid debt, but improve our efficiency and margins over time, to the point we have, as Dick describes, an “appropriate living”. This means we have stable positive net income and a certain degree of balance in our lives. Our farm supports a family, if only modestly.
In the end, it’s hard to determine with certainty the effect Dick had on me, my farm, either directly or indirectly. I do know it has been considerable. His work has rippled through all our lives in uncountable ways, ways we will never know. Tonight what am I most grateful for, what is so amazing, is I am here tonight in community. A motley community of contrary people who give me courage to do everything I’ve just listed. And that would not have existed but for Richard Thompson of Boone, Iowa.