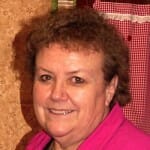 We’ve said our goodbyes. Tonight, we’ve come together gathering as friends, colleagues, employees, and interested parties, to say thank you to a humble giant and to continue the tradition of recognizing one of our own with the Master Researcher award. So sit back, relax a bit and join me in an evening thanking and acknowledging our dear friend and colleague Dick Thompson.

I have been asked to reflect on the impact Dick Thompson had on Ron and me. My guess is, any one of you could have been up here delivering a similar message, one of love and gratitude. We’ve all been impacted in one way or another by the mission of Dick Thompson, whether or not you ever met the man.

I learned about Dick long before I ever met him. For a while back in the early 80’s, there was always somebody in diapers in our household and I was home a lot. Ron attended a Thompson field day with other conventional farmers from Shelby County and came home saying that “this man’s fields are cleaner that ours and he uses less herbicides.” That visit changed Ron’s thought process and got us to thinking: “Should we explore this? Can we lessen the sting of input costs and double digit interest rates and be a part of a movement that, in its early stages, was sometimes viewed with pessimism and ridicule?

It was called Low Input Sustainable Agriculture, LISA if you want an acronym. And it was not the easiest route to take. Its goal was to sustain our soil, our water, our air, and the people, both producers and consumers. And the journey was made smoother because there was someone out there already asking the important questions, already saying it can be done, and already saying “I will share my time and expertise with you because it is important that we not treat our soil like dirt.” Dick Thompson opened his heart and shared his passion, his expertise and his practical knowledge with folks like us and literally the 41,000 who would tour the Thompson farm in the coming years.

Let’s look at that figure for a moment. 41,000 and a farm where innovative work is being undertaken… at a site located in close proximity to a land grant university. Think of the phone calls at the Thompson household. “I have some people in town….” “I’m teaching this class…” “There’s a group from this country or that locale, this company or that government agency and we’d like to stop by…we won’t take up too much of your time.” That’s a lot of Dixie cups of water to have on hand and a lot of time where a day’s work had to be put off so others could learn. But Dick Thompson welcomed these visits, welcomed the discussion and tolerated the inconvenience so that others could maybe see and know what he already had seen and known …that this system works and was long overdue for implementation.

If the Thompson farm tolerated 41,000 visitors, he most certainly, had to have fielded hundreds and hundreds of phone calls asking for advice. That first set of hundreds probably came from a farm in Harlan!

But answer them he did, with a soft, gentle…. yet positive voice of encouragement and optimism.
If you didn’t bring a notebook to the Thompson Field Day, you didn’t leave empty handed. His Thompson On-Farm Research findings, compiled annually in practical and readable form, were a great “how- to” for farmers. His approach to writing was enviable. Chapters came in easy to follow form, like how to farm on ridges, how to cut your weed control costs in half, and more. He did all the hard work so that others could learn and follow through.

One of the coolest things about Dick Thompson and Practical Farmers of Iowa, and I’m being very serious here, is how he and they contributed to how we view the farmer, from the perspective of gender. You’re hearing me repeat Dick Thompson’s name over and over again this evening, but throughout his adult life what you’ve heard and read were the words Dick and Sharon Thompson. In Dick Thompson’s world and subsequently in PFI’s world, women were welcomed and invited to leave the kitchen and take that journey into field trials and research, with their spouse or partner or by themselves as a single entity. That gender acceptance progressed to board membership and board leadership. It continues today with the extraordinary guidance and leadership of Teresa Opheim.

Ron last saw the Thompsons this spring. He stopped by on his way home from a meeting in Minnesota to visit with them and see how their fields were dealing with the heavy spring rains. True to form, they were cordial and Dick went with Ron to look at the fields. The welcome mat was out even though, Ron said, it was obvious Dick was dealing with a lot of pain. The visit was a good one and how ironic that Ron showed up around supper time because he was invited by Sharon to stay for a wonderful meal and fellowship. We’ve been humbled to receive many accolades from PFI over the years. Ron will tell you that the honor that tops the list came with being asked to serve as one of Dick’s pallbearers.

Universities, non-profits and others have endowments. Endowments help secure a future, most of the time a financial future. Dick Thompson endowed Practical Farmers of Iowa, and in many ways Iowa State University, with his knowledge, his willingness to share and his brilliant approach to being a forward thinker. The endowment left by the work of Dick Thompson was a lifetime of sharing the knowledge of good farming practices that keeps more money in the farmer’s pocket and keeps our natural resources where they should be.