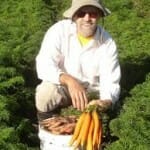 The freedom of affluence opposes and contradicts the freedom of community life.
– Wendell Berry, The Art of the Commonplace: The Agrarian Essays

And there came to me a spirit of wisdom. I reckoned riches as nothing beside her; I counted no precious stone her equal, because all the gold in the world compared with her is but a little sand, and silver worth no more than clay. – Wisdom of Solomon 7: 7-8

This past weekend I attended the Practical Farmers of Iowa (PFI) annual conference in Ames, IA. It’s theme was “Well Grounded” and it’s keynote address by Ricardo Salvador was “True Wealth: How Iowa can once again revolutionize agriculture.” Before I comment on my experience at the conference for those of you reading this who may not know anything about PFI here is a part of their vision statement: “Communities alive with diverse connections between farmers and friends of farmers. Places where commerce, cooperation, creativity and spirituality are thriving; Places where the working landscape, the fresh air and the clean water remind us of all that is good about Iowa.”

I am still “savoring” my conference experience and I am not just talking about the great food we ate from many PFI farmers! Why is it in spite of the largest crowd ever I still walked away feeling so alive, vibrant and full of life? Here are a few insights to my weekend and what I would call a “mystical” experience as well as my own take on what “True Wealth” means to me. What I mean by mystical is experiencing God’s spirit at deep levels throughout the two days.

I think Ricardo’s talk perhaps changed somewhat from his original title. He had us look at a question posed to him by a venture capitalist who was donating a significant sum of money to the Union of Concerned Scientists where Ricardo works. We looked at “What is the Problem with Agriculture? And can we fix it?” Ricardo looked at the life of Abraham Lincoln who asked how can we alleviate the drudgery of agriculture and meet the needs of our nation? So the Morrell Act and the founding of the National Academy of Sciences were formed during his administration amidst the on going Civil War. These two acts led to on going innovation and tremendous productivity in agriculture in the next 100 years. The “Problem” of agriculture is not can we produce enough anymore. We have shown that we can produce enough calories for everyone in the world, it is a matter of just distribution of those calories. Now the question is can we farm in a way that is sustainable and maintain our yields? His answer is yes and many PFI farmers are farming in ways that are and will show the world how to farm when the overarching agriculture system collapses. This is perhaps the model of true wealth he referred to in his title and how Iowa PFI farmers can revolutionize agriculture by showing the way.

There were a number of “connections” I made with friends at the conference. Ricardo was one of them. I first knew him in 1980 when I was just starting as a research associate for the Agronomy Dept. at ISU and he was starting his masters degree. Though we seldom have been in contact over the years I find him to be a kindred/kind spirit/friend. I saw Cedar Johnson one of my former Growing Harmony Farm members first thing on Sat. morning and she so wanted to talk so I skipped the first PFI workshop. She had travelled from Eau Claire, Wisconsin, to participate. She was also a former PFI staff member. I saw numerous former GHF members throughout the day but also saw three people who we had know via Nancy’s and my days at Iowa Peace Network in Des Moines that we hadn’t seen in years. Nancy also met a couple that she had known via her Goshen College days when she traveled to Haiti on a study abroad experience! All amazing encounters, yet I also conscientiously meet and greet new/first time attendees as I had certainly experienced that sense of hospitality at my first PFI conference in 1995.

There have been a number of times that I will choose not to go to church after the conference. Part of it is I want to savor the experience and don’t want to ruin my sense of “communion”. But this weekend I was scheduled as a Eucharistic minister at St. Thomas Aquinas in Ames so Nancy and I went and in the interludes of silence during the service I savored the day and was grateful.

The above reading of Wisdom was part of the scripture along with a reading from 1 Corinthians 1:18-25 that basically says God’s ways are foolish to humans. The Gospel reading was from Matthew 23:8-12 which is about “whoever exalts himself will be humbled and whoever humbles himself with be exalted”.

It was in the reading of these readings that I realized what it was that attracts so many people to PFI and why I have so many heartfelt connections with so many good people who are members and staff people at PFI.

By their very nature Christian communities are meant to be an alternative to the broader “worldly” culture if they are living out of the Spirit of the Good News. PFI by its own nature of fostering sustainable agriculture tries to be a life giving alternative to the broader agri-business culture. Yet the beauty of PFI is that it doesn’t live by any doctrines. There is an inherent freedom to move towards the Greater Truth via many, many paths. So, for example I seldom hear in any workshop/field day etc “This is the way you have to do it!” It is so often, “This is my experience, it may not work for you but try to figure out what works best for you! Learn from my failures not just my successes!” So often in formalized religion we insist on people being perfect. In a breakfast gathering Sat. morning I was part of a mentor round table discussion. One of the mentees said, “ I want to know about your mistakes.” What if beginning Christians were to ask the same question? Maybe there would be a better felt sense of humility.

St. Anselm once said, “The definition of humility is truth applied courageously to self.” I think one of the founders of PFI, Dick Thompson lived this out and set the tone for all of us involved at PFI.

I saw all the staffers of PFI following Dick’s example as being servant leaders. As facilitators at workshops it was never about them. They always brought it back to the PFI members to get their feedback for insight and further discussion.

Wendell Berry touches on True Wealth in his above quote. I know I left the PFI conference feeling like I was one of the richest people in the world. Within PFI there is incredible diversity of opinion and politics. It is one of the unique communities that has been able to hold those tensions together and I believe it is in part due to everyone’s felt sense of “freedom” within our community life that Berry talks about.