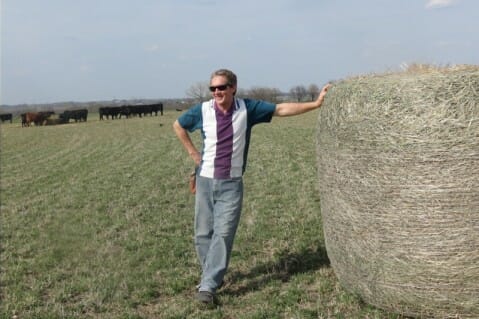 What motivated you to join or renew membership in Practical Farmers of Iowa?

My first experience with PFI was when I attended a field day at Dick Thompson’s farm. I was surprised to see so many like-minded people already forming an organization that was off and running. It was like-minded and bent towards sustainable farming as opposed to conventional AG. I didn’t find a whole lot else out there like it. Certified Organic was going but they didn’t offer the on-farm research and some of the camaraderie that PFI was offering.

What is your connection to agriculture?

I grew up on this farm.  It’s a Heritage farm. This farm was bought by John and Mary McLaughlin in May of 1823. I’m the 5th generation on this farm. I got away from here out of high school and came back to it. I went travelling for a few years. I traveled to Colorado and stayed there for a while. I hitchhiked around the country, went up to Canada and later spent some time in Central America. PFI is one of the things that inspired me to come back to farming. It was something other than conventional ag which didn’t strike me as something I wanted to do. But seeing people do different things inspired me to come back.

Besides farming, what are your interests, passions or hobbies?

Social justice issues. What took me to Mexico and Guatemala was being a child sponsor. I went to Guatemala to visit a sponsored child in 1988. I had a good time there. I was gone for 6 weeks. I hiked and traveled by train; stayed with some nuns. I was a member of Amnesty International for quite some time. The child I sponsored graduated from the program and we stayed in touch for a while. Then I sponsored his brother and he graduated. I went on to sponsor another child in another town and so on and so on. Now I’m sponsoring a child in another town in Guatemala.

Moments with Dick Thompson and Dan Specht-there were a few. I hosted a couple of field days. Early on with Dick- we were a much smaller group and we were having lunch. I think it was the annual meeting. I was sitting at a table with him and it was just the two of us at this little table. I asked him, “Why aren’t you growing organic. Are you trying to give us young guys a chance?” He just smiled and didn’t say anything. Later I saw a book on a table that was about Dick and it talks about how he was certified organic. He’d been there done that.

Funny moment-This was during a break-out session. Dick was always changing his planner, morphing through these changes. Some of us were trying to duplicate what he’s doing. He was up there showing his planner doing his presentation. I commented, “I’ve been paying attention to your planner and I’ve learned not to follow too closely. Let me know when you get it finished.”