The Griffieon Family Farm is diverse, encompassing multiple types of field crops and multiple types of livestock.  Attendees at a recent field day got to meet a number of the animals (and sample some of the sweet corn!) while learning some animal maintenance tips, both for the show ring and the barn.  Hosts LaVon and Craig Griffieon, Autumn and Laramie Ogden, and Julia and Phillip Griffieon showcased various skills on some of the family’s livestock. 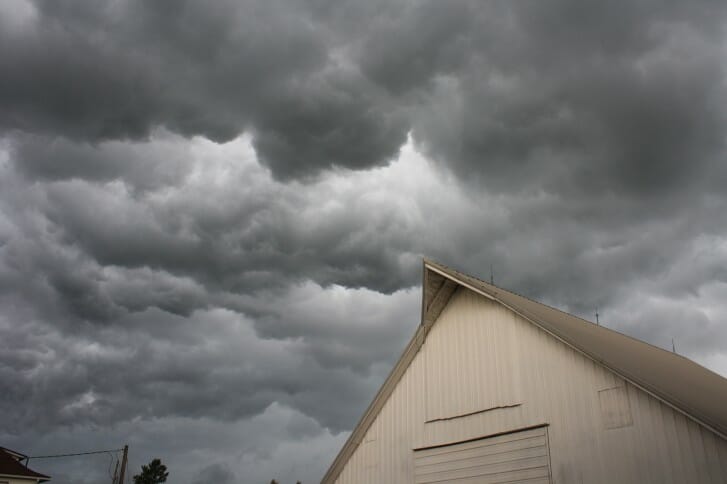 LaVon and Craig led with a demonstration of trimming flight feathers on chickens.  A painless process, clipping these feathers prevents birds from “flying the coop,” as it were.  The bird is held and the wing extended; regular scissors can be used to cut the long wing feather shafts about halfway down their length.  Seen from the underside, the cut line is about where the next longest set of feathers ends.  LaVon says she trims her birds about once a year, after they regrow following a molt.  While some say only one wing need be trimmed, LaVon recommends doing both.  “I’ve seen some that can still get enough power to get up and over a fence,” she recalls.  She also advises that you still keep a sharp eye on the chickens.  “My Amaracanas will get over a fence without wings; they’ll grab on with their beaks and claws and pull themselves over the top!” 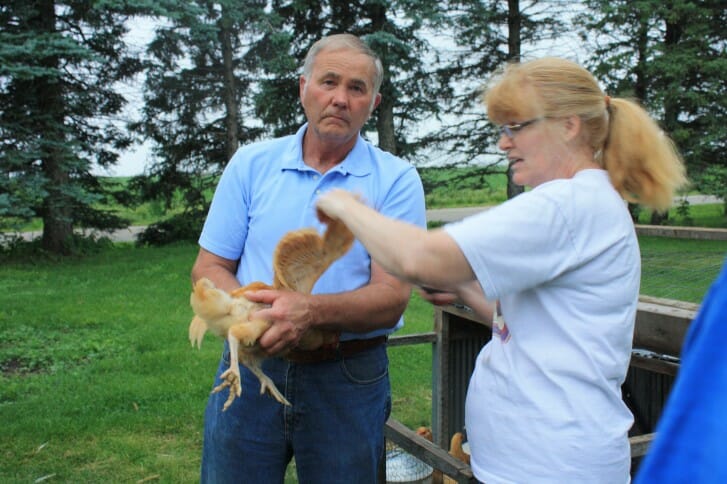 LaVon and Craig Griffieon demonstrate trimming the flight feathers on one of the family’s hens.

The next species to see was sheep.  Autumn brought one of her hair sheep rams to demonstrate with.  The important part is removing any hoof wall that has grown too long and folded under the foot.  “Mud and gunk gets in there and it’s a major cause of footrot,” she cautioned.  Cleaning out the cracks and crevasses and trimming away excess hoof wall is usually sufficient to keep them sound.  She also has surrounded her watering area with rock, so that the sheep naturally wear their hooves down just by daily walking.  While the demo ram had enough hoof ‘fold’ to be worth trimming, she said that she only has to trim feet every few months, whereas attendee Kathy Rose said she might trim her bedded-barn goats’ hooves every few weeks.  Kathy also pointed out that the toe often grows faster than the heel on sheep and goats, and thus the front of the foot often requires more aggressive trimming.  Autumn demonstrated using horse hoof nippers, but hoof clippers – aka pruning shears – or even hoof knives or another sharp knife can be used. 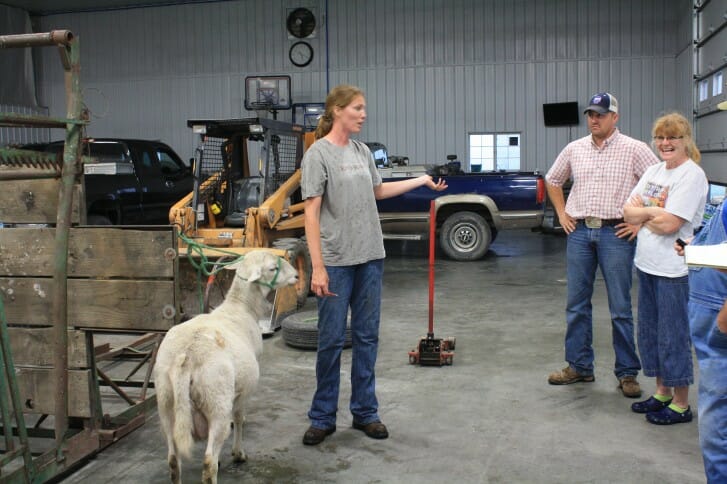 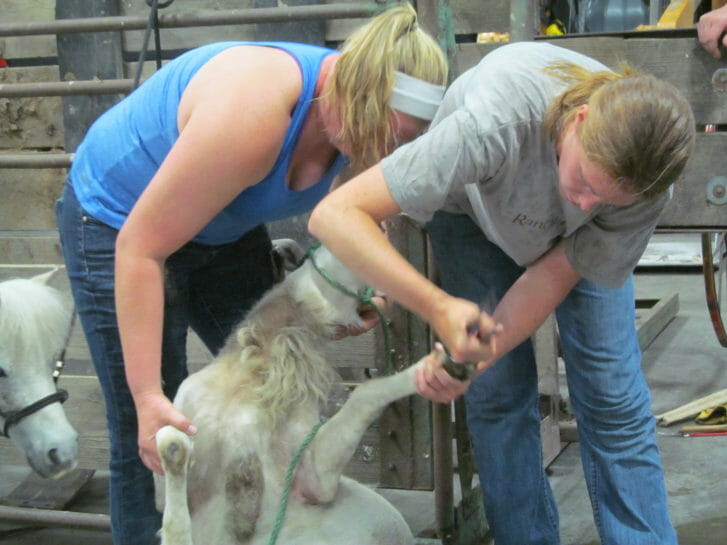 Julia Griffieon and Autumn Ogden give a flipped sheep a pedicure.

Autumn continued to lead the demonstration, bringing out her and Laramie’s horses and one of their miniature horses to showcase.  The Ogdens follow natural hoof care principles on their animals, believing that an unshod hoof is just as good as one with shoes.  Autumn began trimming hooves after farrier services became so expensive, and has read up extensively on the subject.  She demonstrated setting the horse’s hoof on a sort of hoof “jack,” which sets it at a comfortable height for the farrier, and eliminates the need to hold it up with muscle.  One horse and the miniature had uneven wear on their hooves, and she showed how to detect the issue by watching the animal walk, how to measure the problem on the hoof, and how to trim to correct it.  For instance, the crevasse between the soft frog (similar to our heel) and the rest of the sole should be a certain height on both sides of the hoof.  If one side is deeper, then that side of the hoof is growing too fast (or wearing too slow) and should be trimmed back further.  Autumn also pointed out the white line – a light band just around the inside of the hard outer hoof wall when viewed from the sole – that is an indicator of trimming far enough and not to keep going.  Autumn demonstrated use of the hoof nippers, knife, and rasp to properly shape, shave, and smooth the hoof to properly support the horse’s weight. 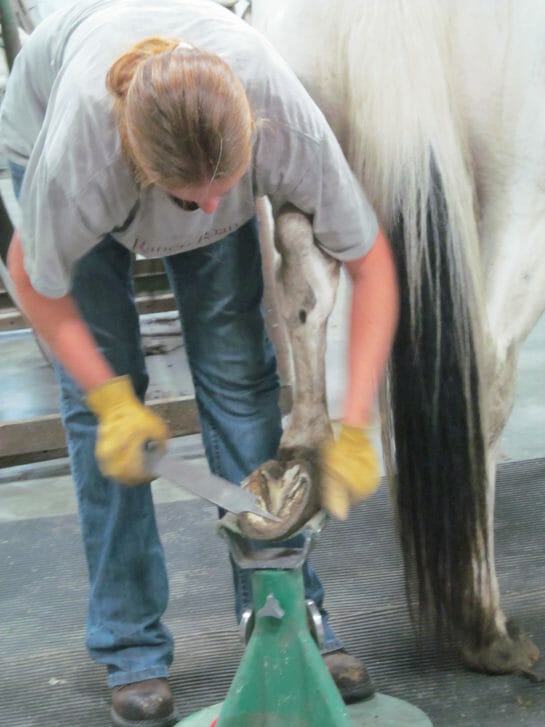 Autumn Ogden uses a hoof rasp to smooth and shape a horse’s hoof.

As if the information so far wasn’t neat and new enough to the participants, there were some gasps and laughs as Craig and Julia showed how to flip a cow!  Well, sort of.  The only real way a cow can be tipped is in a turntable, a special handling chute where the animal is strapped in by its belly, then rotated to lie on one side.  Its feet then are secured tightly and necessary maintenance can be done.  The next best part?  Hoof care for cattle is done with power tools – coarse rotary trimmers that act like sandpaper to grind down the hoof to the desired shape and depth.  Julia’s show steer was the lucky volunteer.  Why trim cow hooves?  Julia and Craig pointed out how the steer’s toes curved inward on each hoof, forming a nook between the toes that mud might get caught in.  While not worth doing footwork on the average commercial cow, it could be a problem for animals in a lot with lots of soft footing.  Trimming the steer’s toes has a show advantage though: “It’s like putting a girl in high heels,” Julia said.  The change in stance shifts the steer’s weight forward, making him stand a bit more upright.  Craig pointed out a few aspects of trimming: ideally when looking “down” the hoof, it should be flat.  As with other species seen, the hair-hoof line should end up parallel to the ground.  He also pointed out a dark color on the sole that becomes evident when you near the blood vessels in the living hoof, as opposed to the dead outer layers.  All of the fuss worked – once released, the steer practically pranced with his new pedicure. 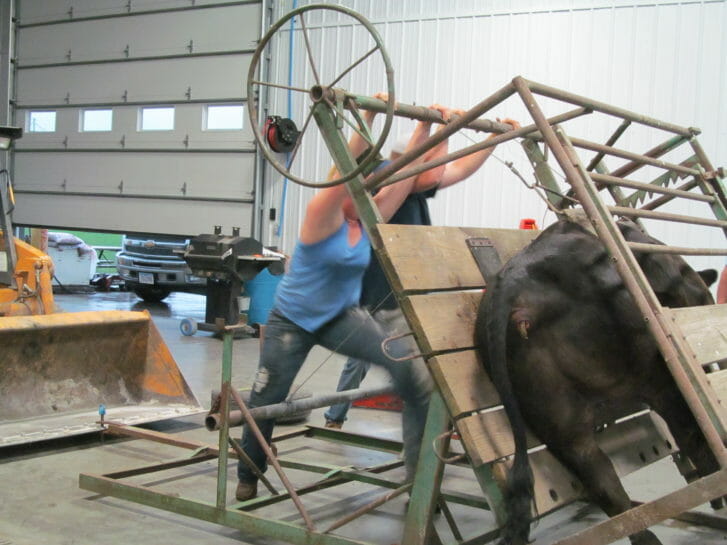 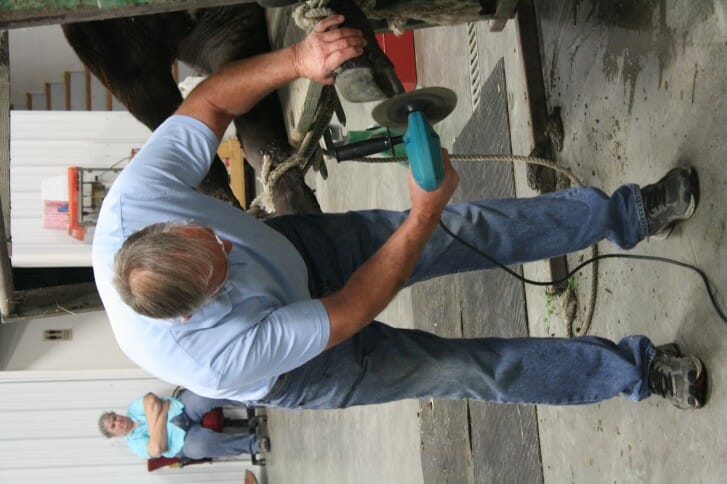 Craig Griffieon uses a grinder to shape and smooth a show steer’s hooves. 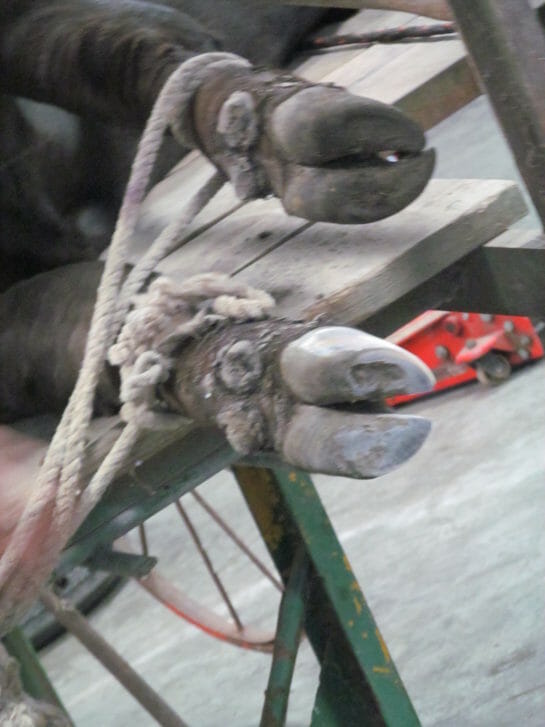 Quite a difference between the lower trimmed steer hoof with the grown-out one above. 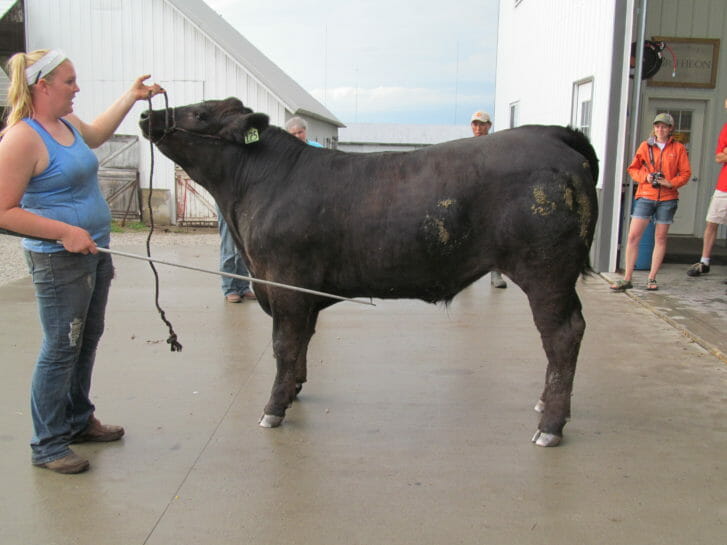 The finished product! Julia Griffieon sets the legs of her show steer with his new hoof trim. Looking sharp!

Julia and Craig also demonstrated some hair care for show cattle.  To create and emphasize a deep, blocky appearance on one of Julia’s show heifers, they showed how to brush and clip the fur on her topline and forequarters.  The tail is trimmed on the sides to create some clean lines when looking from the rear, and carefully trimmed on the top of the tail and rump to create a square silhouette.  The topline is similarly made “flat,” and hair on either side of the topline brushed up then clipped to stick out a bit but look square, making her look wider when viewed from behind.  The heifer’s head, neck, and brisket were clipped fairly close to sharpen her front end, though her belly was left long to make her look nice and deep.  Later on, closer to the show, she’d get a proper bath and loose long hairs would be trimmed. 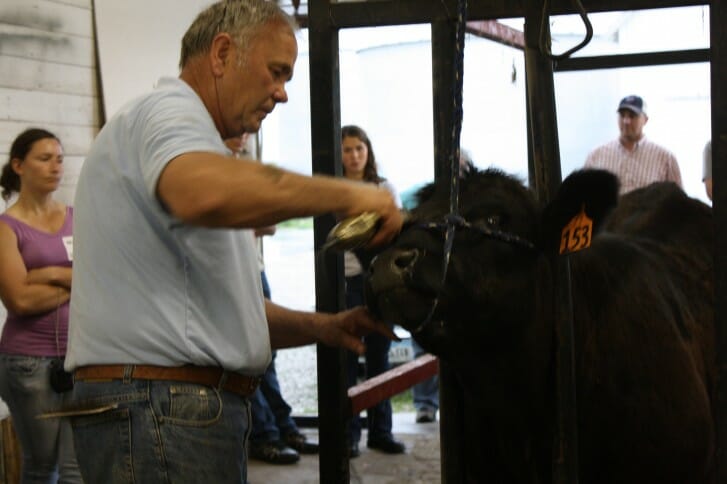 Craig Griffieon patiently works with a show heifer to neaten up her face and forequarters. 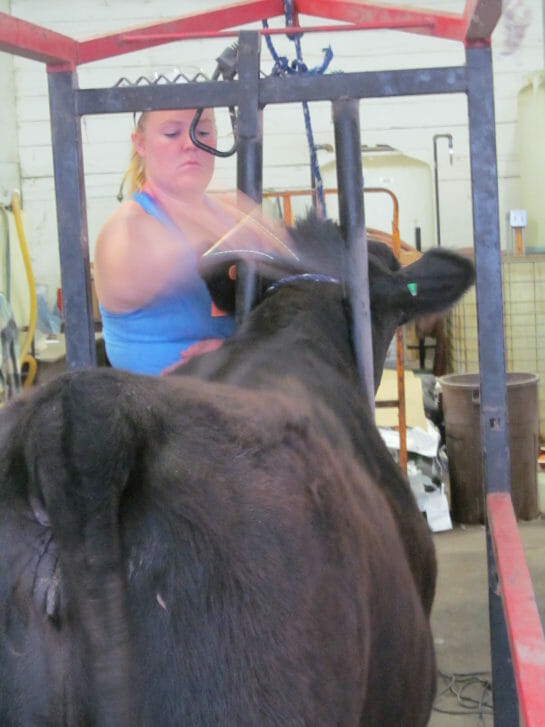 Julia Griffieon combs her heifer’s fur to enhance the blocky appearance generated by a flat clip along her topline.

Some for show, some for safety, some for performance – everyone sure learned a lot at the first ever livestock hoof, hair, and feather maintenance field day by PFI!