The third of its kind, this down-and-dirty, hands-on field day was a great learning session for anyone interested in small- to mid-scale poultry farming.  Jason Grimm hosted just over 30 attendees at his family’s farm, sharing his experience and knowledge in raising and processing pasture-based chickens.

Jason and his wife Hannah are the third generation on the diversified farm.  While this event was about poultry, they also collectively raise corn, hay, oats, beef, produce, and dry beans, utilizing long-term rotations and livestock integration to keep the soil and the farm healthy and productive.  Marketing is both direct and through several cooperatives; the New Pioneer Food Co-op which they work through was the field day’s sponsor.  Thanks much!

Jason Grimm introduces his family’s farm at the field day.

After a bit of background on the farm, Jason took the group to see the chicken tractors out in the pasture.  This current batch of 200 chickens was divided into three tractors that get moved every few days to a new patch of pasture.  The area they’re currently going through, near one of the buildings, was full of ‘standard’ pasture grasses as well as dandelions and other forbs.  What look like weeds to people, though, were snapped up in a flash by the birds once Jason demonstrated moving the tractors with a modified dolly.  Jason explained some of the evolution of his tractor design.  He now has an angled roof, which prevents water from sitting on the metal half of the roof and warping it.  Old lawn mower wheels on the sides of the tractor allow it to be dragged if a dolly is used to lift the opposite end, though he’s still working on getting the ideal wheel size and placement.  Feed troughs and waterers need to be moved by hand; while hanging equipment might be easier in some ways, it has not been one of the priorities thus far. 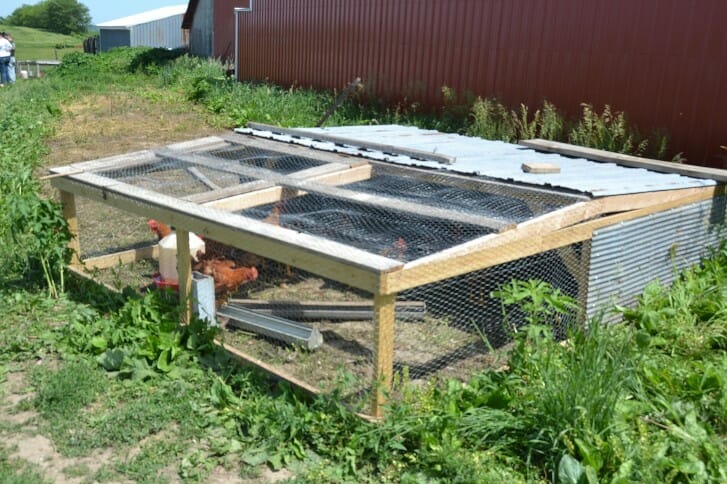 Jason has raised a few broiler varieties, trying different ones out based on availability, price, and hardiness.  He’s avoided the Cornish Cross because of their various health problems, relative reluctance to graze, and to capitalize on the better meat quality and taste of other varieties.  Mostly he’s used varieties of Red Ranger (sometimes called Red Broiler, depending on the parent company), and while it takes them longer to finish out than a Cornish, they dress well and forage well.  Jason is working to reduce feed costs by grinding his own feed, most of which he also grows.  While soybean meal must be purchased, the grains and corn come from the farm, and he’s seeing better profit margins as a result.  A very quick guesstimate of feed conversion was 4:1 (4 lb feed per pound of dressed bird), but in the future Jason will have a better idea of the exact values, as he is participating in the Poultry Recordkeeping research project through PFI’s cooperator program. 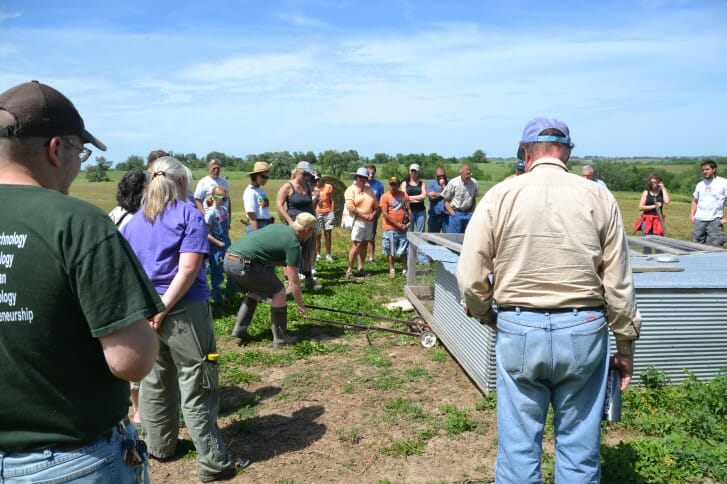 With the tour done, the group moved back to the actual processing area.  There Jason explained the entire system and process, while family and friends kept the chain going in the background.  Birds were brought from the tractors in crates, then individually carried to the processing setup.  First, their necks were stretched to separate some vertebra, stunning them and making it easier to reach their heads in the next step.  The birds were then placed headfirst into a kill cone, and their main arteries were sliced right near the jawline.  Ideally, Jason explained, the windpipe (between the arteries) is left intact.  The lungs and heart will continue to pump for a bit even though the bird is dead; this helps pump more blood out quickly and eases cleanup later. 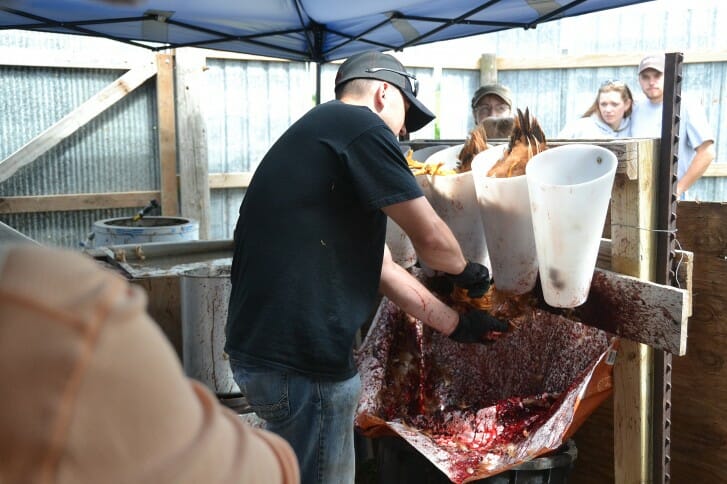 A chicken is quickly and efficiently bled out at Grimm Family Farm.

Dead and still birds (sometimes there’s some involuntary shuddering and flapping) are submerged in scalding water (about 155-160°F) for a minute, to loosen the feathers.  Jason has a scalder with a “rotisserie-style” cage to hold birds and dunk them into the water for the specified amount of time.  Another option, exercised when equipment isn’t working quite right, is to have a turkey fryer keep water at the right temperature and hand-dunk the birds.  A bit of dish soap helps break down the fat and oils on the feathers and skin, making plucking easier and cutting down on the smell.  Soaked carcasses are plucked in a tub plucker, a drum with rubber fingers on the inside that tumbles the birds around and pulls the feathers off while leaving the skin intact.  Plucked birds’ heads and feet are removed.  Blood, feathers, and heads are composted; feet are sold when possible. 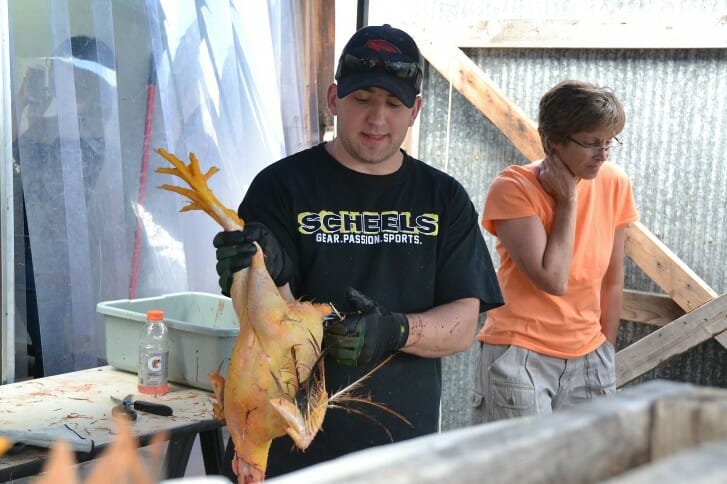 A scalded and plucked chicken is ready for the next stage of processing at Grimm Family Farm.

The bird then moves indoors, where the remaining fine feathers are singed off.  A neat assembly line of family member-workers eviscerates and cleans the birds, separates out the desirable giblets, and then packages the carcass.  Jason has appreciated his investment in shrink-wrap bags.  Birds are placed in the bags, which are sealed off except for a tiny pinhole, which lets air out when the package is dunked in hot water.  A waterproof label on the top makes for a great presentation and easy storage.  The final product is chilled in large ice water tubs to prohibit any bacterial growth.  Some participants elected to try the process themselves, assisting with slaughtering and even cleaning out some birds.  Jason demonstrated how some birds are cut up, an option he gives customers when they pre-order from him.  The family will process all 200 birds over less than two days, and many customers come right to the farm the day of processing to pick up their chickens. 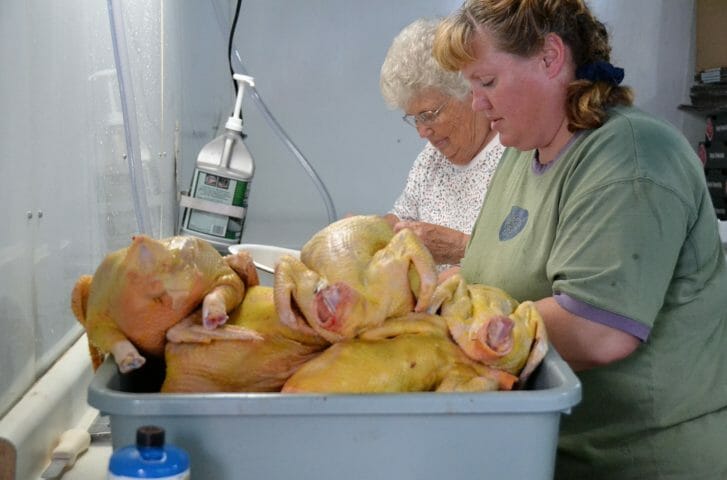 Chickens ready for the next stage of processing at Grimm Family Farm.

All in all, a lot of learning and experience went on in a truly functioning, working farm environment.  Many thanks to the Grimms for hosting such a great field day!