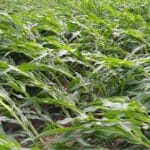 What a week for Iowa farmers! Once gain the rains came down in sheets—sometimes inches at a time. Ironically for a pocket in Southeast Iowa still in drought, an almost 4 inch rain was welcomed! Here’s are some reports from PFI members, shared on our listserv.

Between downpours this afternoon I made it out 9 miles NE of Ames to give my cattle a couple of day supply of grass.  I drove through water over the road in a couple of spots to get there, and, since it was pouring when I drove back, I don’t think I will make it  out there tomorrow. We are hoping against hope, but it looks like Ames will be flooded and many roads in and out of town will be underwater. How I wish we could share this water with SE Iowa or Southern California!

Some cornfields looking 50% flattened between Whitten, Conrad and Wellsburg tonight.  A combination of saturated soil and some wind allowed the roots to tilt.  It will be a challenge to harvest this fall, assuming it survives. Some seed fields may have to be abandoned, if they suffered this tilting damage. There is massive soil loss occurring.

Roughly 17 inches of rain since June 16th. Southern Grundy County, parts of Hardin, Marshall lots of corn green snapped. One field estimated at 20% this is from Monday night.

We had 6.8 inches between June 17 and 22 and it mostly soaked into very dry soil. We received 7.0 inches June 27 to 30.  It ran over roads and ponded fields for an hour or two as it ran off. From one side of the house water flowed west into the Iowa River. The other side it went east eventually it will be in the Cedar river. But some is getting pumped out of our basement with the sump pump.
There is some damage to crops.

We managed to pick up an inch of rain today, but nowhere near enough to break the drought we’ve been in since 2011.  We could sure use another 10 or 12 inches….

Later post: We ended up with 3.8″ for the day, and I am grateful for every drop.

Be careful what you wish for….  Two weeks ago we were hoping for a little rain cause things were dry and rains were going north again.  Hard to remember what that was like.  Don’t have totals for today, but it’s a good bet were pushing 15 inches since two weeks ago tonight.  Southfork is over all the area roads for only the second time in anyones memory (roughly the last 100 years), with the first time in June 08.  Hopefully it won’t rise too much more, but   it means six miles to the dairy farm from our home instead of a little more than a mile.  Needless to say, lots of crops under water.  Replant will most certainly be for chopping.  I’m not sure what river you’re near, but a whole bunch of water is headed toward southeast Iowa.

In the category of someone else always has bigger problems:  I visited with my neighbor today.  Among other things he has a limestone quarry at Gifford, where Southfork joins the Iowa.  In 08 he had to pump out 100 feet of water from an area of about 10 acres.  They normally run pumps to keep quarry dry enough to work, but that flood required a new submersible.  It took 45 days to drain it in 08.  He said they shut down operations this morning because access roads were flooding.  At noon (before the heavy
stuff we had today) he was afraid it would flood again…except now the quarry is 130 feet deep. At least we don’t have to shovel it…just the mud left behind.

12-14″ past 2 weeks. I was able to cultivate 7% of my corn, the remainder will have to fend for itself, still looks rather good. Weed seed bank will certainly be replenished. Pulled out my topographical map – house is 110 feet above creek – should be OK!

It is an interesting time to be a beginning farmer right now. I am in my fourth year of farming and I have experienced two droughts and now heavy heavy rains, not calling it a flood yet because as my grandpa says…it could still turn into a drought this summer.

In the midst of the challenging nature of farming in extreme weather conditions I am extremely grateful for PFI. Just yesterday in the midst of the rain I was in contact with 4 or 5 farmers. We were all just checking in, seeing how each other fared the storms.

I think there are pockets of grimness and stress with this extensive rain but the community that PFI creates and fosters is what I am noticing right now.

We’ve had around 9 inches rain over the last week.  Hasn’t done any serious damage “yet” to any of our cash crops (veggies) and the 2 acres of buckwheat cover crop (next year’s solanum and allium field) are looking good as well as the soybean cover crop planted in our acre asparagus patch!  I’ve never seen so many summer squash blossoms open up after a rain as I have this year so hopefully there are some positives coming out of these storms ; ).  My thoughts are with all the folks that got hit a lot harder in other parts of the state!!!

We are very saturated, my potatoes are flowering and turning yellow, they were weeded by cultivator once but not again, it’s been a month. Lettuce is starting to rot, I am worried about the onions rotting, leek washed out by runoff from neighbors bean field. We cannot seed, weed or transplant much, we have had only one or two days in the last month with conditions that got me excited about seeding, feeding, weeding. fortunately we are not flooded like our friends in to the east (Boyden) west ( Rock Valley) or north (Rock Rapids). We have been getting about 4 to 5 inches of rain per week.

No-till holding the soil well at my place!  Meanwhile I am working on home renovation (inside!), and on my non-farm job, so I’m content.  Corn looks terrible, but corn isn’t everything. Only 4/10ths so far today– maybe the drought is returning..

Tipton Iowa took some wind damage and no place for the water to go. Streams are running high. This was my first year converting 1/2 of my fields from row crop to hay. What a difference in sheet erosion…none this year. Oats look good with a few areas knocked down…biggest issue is we have not had enough of dry spell to get it cut dry and baled. Maybe this week if we are lucky. The good news…the pond is almost full again!!! Plenty corn down along Highway 38 though.

Soils are saturated, rivers and streams are very high, but most crops look good.  We have gotten rain pretty consistently for the last 3 weeks, but nothing torrential so it has provided some time for rains to seep. I heard of some tennis ball size hail in our neighbor county – Chickasaw yesterday, though.

The Iowa River flooded, for the second time in June. Came up and out on Sunday, crested yesterday, just started receding today. The river probably won’t be back in its banks until sometime next week. The water is just as high as last year’s disaster. Most routes in to Albion from the South were cut off. Thousands of acres under water. Our farm has over 140 acres of crop, and nearly all of our primary pasture (over 100 acres) underwater now. Our main cow herd is on a high knoll, and we’re hauling feed to them, driving through  2ft+ of water running over hwy 330.

Also on Sunday, had a big wind event, flattened corn for miles around. Took out several neighbors grain bins, at least one big machine shed. The corn is goosenecking in places. Others it was just snapped off. So harvest could be interesting. Trees are down all over. Most of the area lost power, but now have it back on.

It’s been an exciting week! But we haven’t lost any calves, and crops are insured. Nobody around here’s been hurt, that I know of. So it isn’t all that bad.

Hi all.  Glad to hear about folks seeming at least semi-optimistic given the challenges of this year.  Really  -a sweatshirt even when working hard outside – in July?  Oh my.

I do need to comment, though, on a couple of people saying “well, we have crop insurance”.  Most vegetable and poultry farmers do not have insurance. We are trying not to panic too much as we see tomatoes, squash, eggplant in standing water nor when we see the lettuce aging quickly still in trays because it is too muddy to get it planted.  We have the advantage that at least for some of our crops we can replant (again, and yet again).  However, the only crop insurance we have is the good faith of our CSA customers. We’ve now canceled another week of CSA because things are not growing.  We’ll get there and are hoping the customers won’t give up on us.

My thoughts go out to those who have to look at the visual signs of damage – barns down, hay under water, etc.  Hang in there everyone!

I’m sitting at my desk, looking through the window my grandfather looked through, over land that he farmed, and his dad before him. It’s now share-cropped with the guy down the road who has big machinery, so it’s not my mess, but half of that land is now engulfed by the Skunk River – or at least water that should be in the river. It’s not actually out of its banks, just low ground that is not able to drain, meaning that nearly 100 acres of beans won’t be this year.

On the CSA side of things – my day-to-day – I thought I was being smart when I selected 2.5 acres that is on high ground. Little did I know that low spots within the high spots would be costly. Good thing this was deemed a “year of learning”. Oh, right, better get used to it… all years are that way….

My last thought before I stop procrastinating – is that I hope that we can continue to increase our ranks within forward-thinking organizations. Thanks to the many of you who have been thinking, working, sharing for many, many, many years… and to all, like myself, who have joined the ranks more recently and will continue our important work.