There has been a lot of press on Map of My Kingdom, a new play that premieres this Saturday, July 12th. Angela Winburn, a member of Practical Farmers’ Farm Transitions Committee, was interviewed for a story that will appear on radio stations statewide. Tom and Irene Frantzen, also members of the committee, had an editorial published in the Cedar Rapids Gazette. A story on the play will appear in Friday’s Des Moines Register, and much more.

The reporters have had some interesting questions. Here are answers:

What is the goal of the play/production?

The goal is to get people thinking and talking! And to publicized the critical role farmland owners have in determining Iowa’s future. Practical Farmers also wanted to support longtime PFI member and writer/playwright Mary Swander and other Iowa artists.

Why is Practical Farmers tackling this issue now? 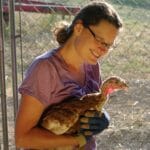 What is the biggest threat from this transition?

That we will end up with fewer and larger farms, farmers unable to purchase land that they farm, and even fewer people on the land stewarding resources and growing healthful food.

Many farmers will lose farmland — their source of livelihood — during this transition. Farmers who rent land are in a precarious position: When their landlords pass on, much of that land will pass to the landlords’ heirs collectively or in separate parcels. Some of those heirs will want to cash out quickly, leaving farmers struggling or unable to find the financing to purchase the land.

The situation is equally severe for farming offspring of land-owning farmers. Often farmers plan to divide their land equally among offspring. Many farming offspring will not be able to buy out the other heirs who want to sell the farmland to “cash” in on their inheritance.

The farmland transition is exacerbated by steep land prices, which make it very difficult for beginning farmers to get started.Iowa farmland values doubled from 2007-2012. During the past 55 years, the number of Iowa farms has decreased from 206,000 to 89,000. We need the next generation of farmers to grow our food, steward our land and keep our communities vibrant.

What are the opportunities during the time of transition?

If you own farmland: Now is a good time to think through what you value most. What are your hopes and dreams for its future? Do your heirs know your goals for that farmland 50 years from now? Do you want your farming children to continue the current farm operation? Do you want the farm kept together?

What were the common themes you came across during your “Map of My Kingdom” interviews?

The common themes of the characters in “Map of my Kingdom” were families struggling to find some peace within the conflict over the transfer of land from one generation to the next. Some families have given thoughtful attention to the issue; others have tried to push it from their minds. Some thought they had found a solution, and it didn’t work out the way they had hoped. Other families had a member who helped all arrive at a compromise. No matter what happens, it is a difficult transition because one must face one’s own mortality.

What was the biggest surprise?

The biggest surprise in writing the piece was the inherent conflict and tension that lies within the issue. When I began my research into the issue, I wondered where I would find the conflict for the show. The conflict was evident everywhere I turned.

You have a land-transfer story from your own family. Care to share it?

Many years ago, my two brothers and I ended up inheriting the family farm. My brothers wanted to cash out and take the money. I did not. Sadly, the farm was sold to a corporation without a trace of its homesteading past preserved.