Dodging rainstorms (I just wish all the farmers got as lucky with weather as I’ve been on my field days…) southwestern Iowans met up for an informative field tour at Noble Pastures, the farm of David and Leslie Carbaugh and family.  The farm has been in the family for years, and David is working on turning it into a sustainable grass-based livestock venture, when not busy selling insurance in Omaha.  This field day was as valuable for him as for the attendees, as experienced farmers Ron Dunphy and Paul Ackley offered insights and answered specific questions. 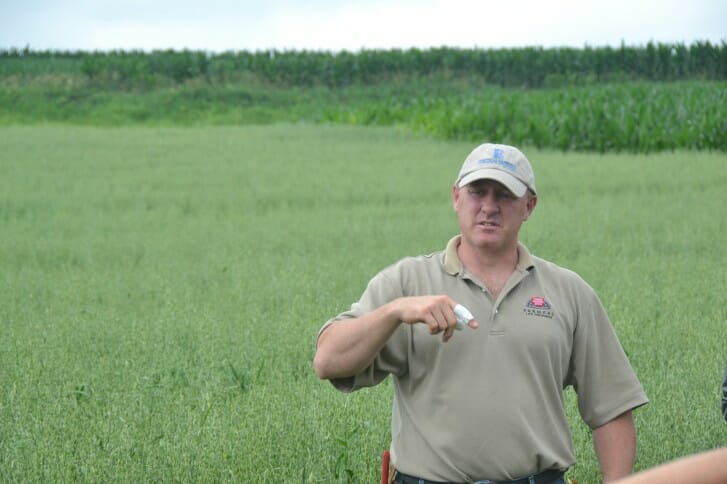 David introduced the farm, which belonged to his grandfather.  Currently it is in a combination of row crops and pasture, housing a handful of cows.  Chickens, the ‘gateway drug’ that got him and his family into farming in the first place, and sheep reside at their current home, though in the long run they plan to move to his grandfather’s land.  Ultimately David wants multispecies herds to rotationally graze the area, but he’s setting manageable goals to get there.  He hopes to slice another 10 or so acres out of crop production every few years, or as funds and time allow. 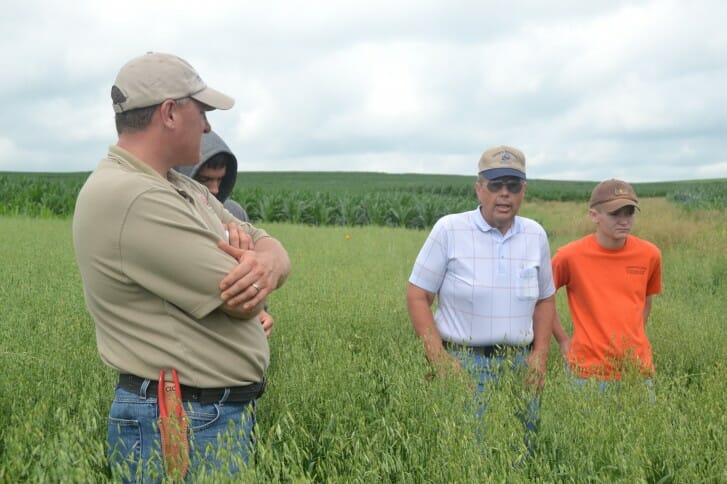 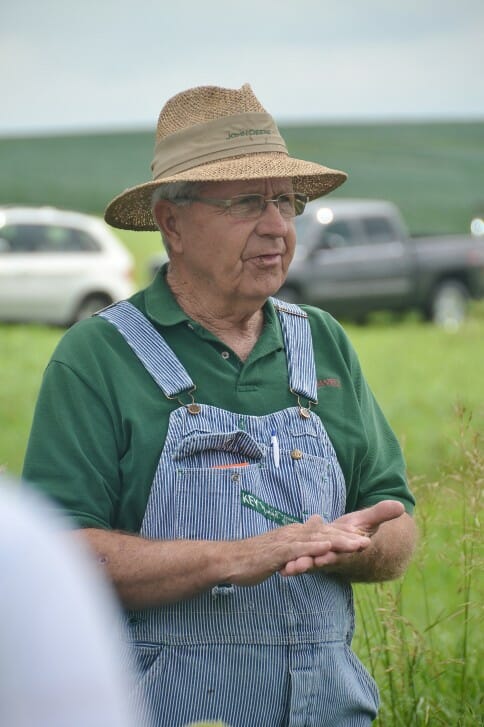 The first site of the pasture walk was to one of these newly-converted areas.  Several acres originally in row crops were planted to a diverse mixture of annual and perennial cool-season forages.  Oats, the nurse crop, were dominant, but the group also identified several varieties of clover, alfalfa, and bromegrass.  David also recalls seeding orchardgrass and birdsfoot trefoil, though they weren’t apparent.  Some questions he had were on managing the oats – because of the weather, he hadn’t been able to cut them down and they now were very tall and headed out – were they likely to choke out the other species?  General consensus was no – the others had established, and while it’d be nice to cut the oats off (perhaps getting a cutting of hay, if not the best quality), the pasture would probably do well.  Another question was on the presence, either now or in the future, of tall fescue.  While the endophyte fungus in most fescue varieties can cause health issues in grazing cattle, it is an extremely tough and resilient species and can be managed with limited detrimental effects.  Ron and Paul explained that chances are, fescue will appear in David’s pastures – but with a healthy mix of other species, it won’t necessarily take over and will not likely threaten his herd’s health.  Ron also suggested incorporating some warm-season forages into his overall farm mix.  These plants grow during the heat of summer, unlike most pasture plants, and so fill in a common forage “gap” with high-quality grazing.  His favorite (referred to as the Cadillac of warm-season grasses) is gamagrass, which he said would do well in wetter areas. 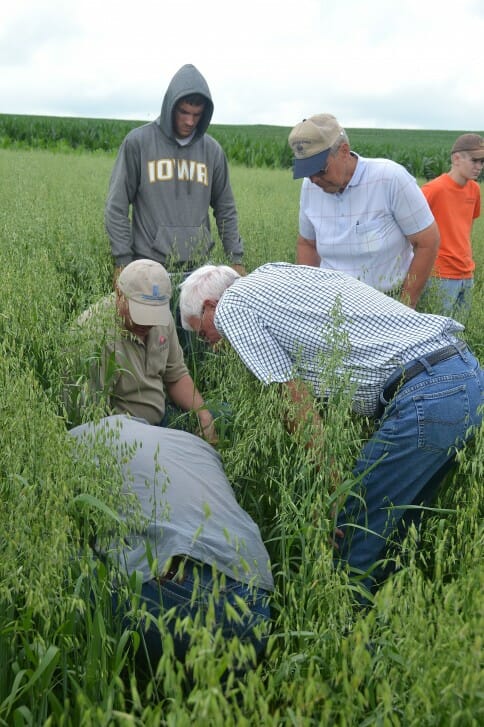 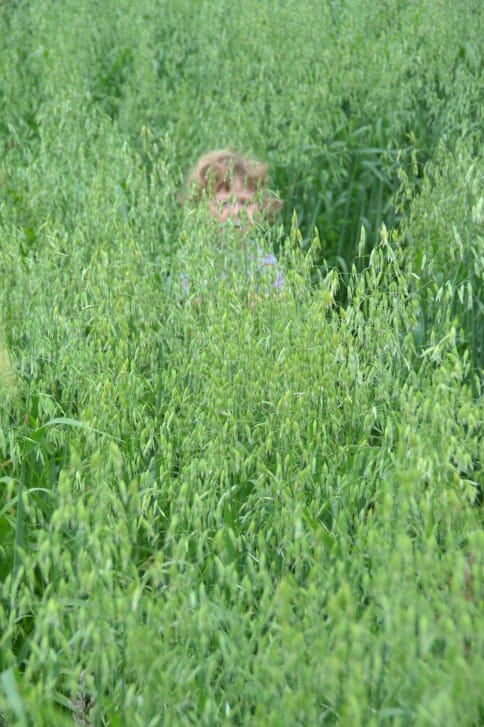 Peek-a-boo in the oats!

The second site was what David called the “old pasture,” a large lot that to his knowledge has never been anything but pasture or, more recently, hay ground.  Bromegrass, a few varieties of clover, and some reed canarygrass dominated the field, overall a decent mix providing good volume of forage and fair quality.  The group concluded that getting livestock on the area would be beneficial: while the proportion of legumes was good and represented natural inputs of nitrogen into the soil, between heat or water stress and years of haying, the pasture grasses were a bit more yellow than ideal.  Animal impact and nutrient recycling on the soil, rather than exporting the nutrients out of the field, would improve the soil and nutrient cycles in those acres.  Part of the reason for no livestock recently is the fences.  David had concerns about the integrity of the existing fences, though admitted that the old posts were such hard tough wood that he couldn’t easily stick nails into them.  Considering that on one side of the field is a neighbor’s row crops, and on the other was the road, good fences are important!  How should he best install fencing for his cattle and sheep?  Most participants recommended polywire and just moving with temporary posts within the existing external fence.  The existing fence was fairly sound, so a few additional drop posts and/or a hot wire or two should keep most animals inside. 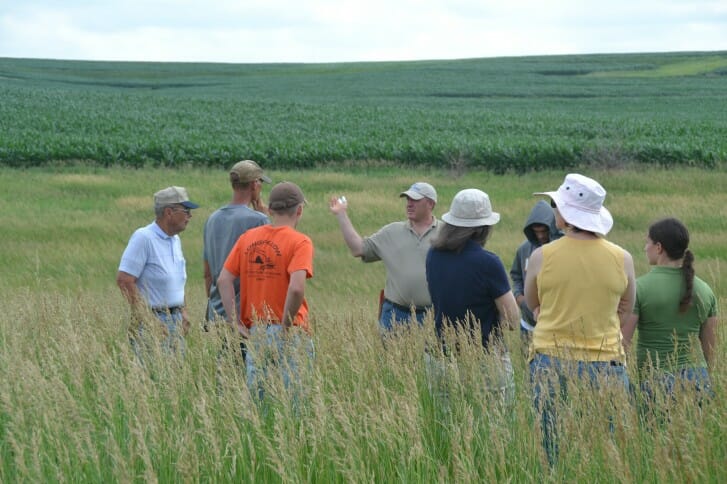 Checking out the old pasture at David Carbaugh’s field day.

Livestock breeds and selection were another big topic.  David wants cows that can calve on their own and require little day-to-day maintenance, since he’s currently a weekend farmer and doesn’t see that changing soon.  They have to be hardy and raise a good calf, and be manageable by other family members in case he can’t always be out to move or check them.  Smaller breeds were suggested, which he’s already selected for; while the vociferous cow #4 was a big gal, most of his broodcows are in the 1000-1200 lb range.  Russ Wischover, another PFI member and grazier, recommended his favorite Murray Grays, an Australian composite he has found to be docile and hardy.  Other suggestions included Dexters, Lowlines, and other compact breeds. 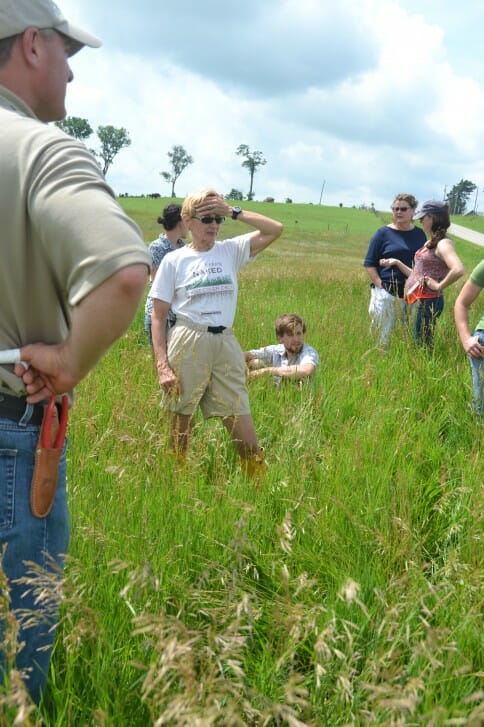 David is interested in holding more events and some hands-on workshops in the future, and invited others from that southwestern corner of Iowa to share names and contact info to facilitate such events.  If anyone reading this is interested, give me a shout and I’ll pass your name on. 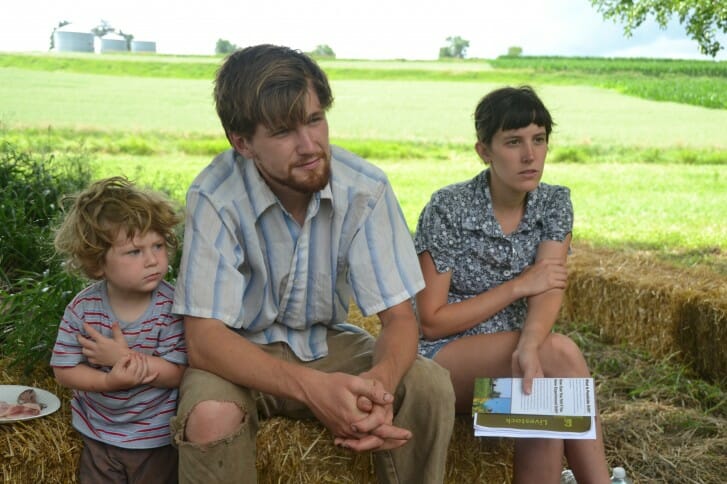 Families, food, and farming – hallmarks of any PFI field day!