Yes indeed, row crops, fences, cattle, cover crops, popcorn, and watermelons…what do they have in common?  They all take up part of Glenwood Century Farm in Albion, and Wade Dooley and family shared some of their enterprises with a group of field day attendees on June 24.  Participants learned about the challenges Wade has faced, his responses and adaptations, and current and future projects to improve his farm’s profitability and sustainability.

Wade and his dad farm about 1500 acres in a diverse array of enterprises.  While they do have acres of corn and soybeans, there’s also hay and pasture ground for the cattle, cover crop fields for grazing and seed production, and some specialty crops.  The farm is in a low area near the Iowa River, so has been challenged by floods frequently over the past few years.  On the “bright” side, just like the Nile River Valley, they get some decent silt and soil deposits from neighbors…but mostly, it’s a nuisance and has affected Wade’s management and plans. 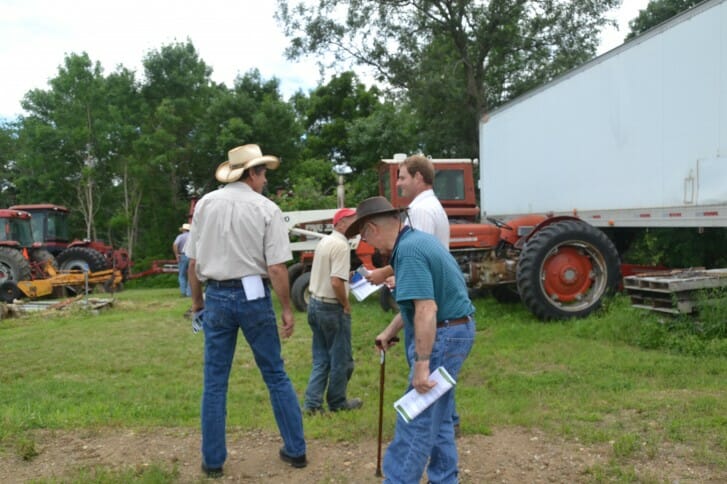 Wade first talked about his corn variety trial, done through PFI’s on-farm research program.  He’s comparing transgenic and nontransgenic corn: he seeded two versions of the same hybrid, the only difference being the presence or absence of transgenic traits.  Wade said that there’s a common perception that transgenic corn has an instant yield boost over nontransgenic corn.  The traited corn has some herbicide and pest resistance genes, but Wade doesn’t use either of those pesticides and hasn’t seen much pest pressure.  “I honestly don’t expect to see any difference apart from the price of the transgenic seed being more expensive by $100/bag,” he said.

For years, Wade has been growing cover crops to protect the soil (roots holding the soil in place means it might not wash away in a flood, if nothing else!), provide benefits for the soil, and as early spring feed for his cattle, who he often calves out on winter wheat cover crops.  With the increased interest in cover cropping more recently, he said that the price of seed has risen drastically – something like double compared to 10 years ago.  In response, he has tried harvesting and harvesting rye seed off of a few select acres (ones that aren’t the best for cash cropping anyway).  Especially since he has access to a seed cleaner, this has helped reduce the expense associated with cover cropping, and it means that some vulnerable land is removed from row crop production.

Another project is fencing for better land utilization and management.  Wade grazes his cow-calf herd, but has struggled with his “daisy chain” of pastures when the weather turns bad.  Without good laneways, he’s had issues moving cattle back to a safe area when flooding starts, and water access is limited in some areas, particularly when he’s had a dry summer.  With support from NRCS and cost-sharing from EQIP, he’s in the process of installing an extensive fencing and watering system that should alleviate many of these challenges.  Cattle will be easier to move when needed, and will not need to walk as far to get water.  Slightly more intense rotational grazing will also improve the pasture utilization, which means higher animal productivity per acre.  Gary Applegate, the Grundy County SWCD resource conservationist, said that less than 35% of available forage is grazed in a continuous grazing system.  With subdivisions into four or eight or more paddocks, this can be increased until a high-intensity “mob” grazing system can achieve over 75% utilization.  Challenges exist in the planning and implementation of the system, though.  Fellow PFI member Bruce Carney offered feedback from his own experiences, some with flooded pastures, on the type and tightness of fences and waterers to install.  Wade now may look into some nose-pump waterers to reduce energy use. 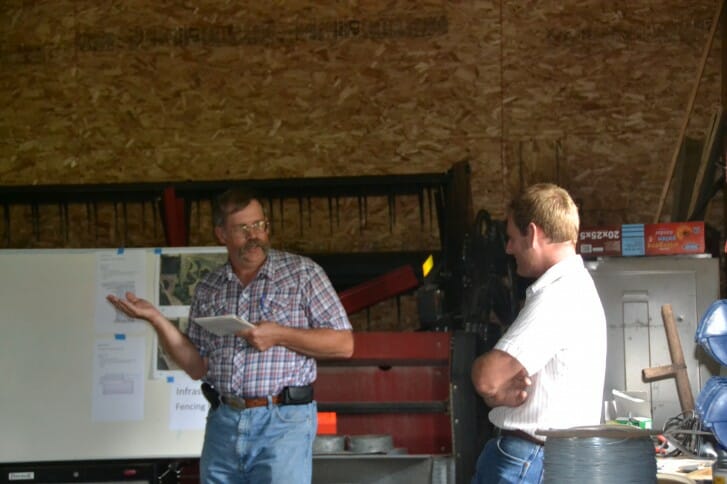 Last but certainly not least, Wade gave an overview of his nontraditional crops, and the tweaks he’s put on machinery to work with them.  Following work down in Florida with watermelon breeders, and knowing that Iowa used to be a major watermelon-producing state, he decided to try planting some of the super sweet, consistent varieties his boss had developed.  On a few acres, he’s kept a few rows of watermelons, which he markets to local HyVees and schools; some baking pumpkins for a Cedar Rapids restaurant’s special fall meals; and some butternut squash that acts as a trap crop for insect pests and produces fruit for the Veterans Home nearby.  In the late spring, when the soil is warm, Wade (and family) plant the watermelon transplants by hand into prepared hills covered with biodegradable black plastic mulch.  (PFI plug here – the transplants are grown near Boone by PFI member Mike Salama, and the equipment to lay down the plastic is borrowed from Table Top Farm in Nevada!)  Pumpkins and squash are direct seeded by hand.  Wade plants oats between the rows and in the end rows to keep the soil in place – “Mother Nature wants something to grow there and will make it happen, so I figure it might as well be something I want,” he quipped.  He also went over some aspects of management such as detangling and flipping the vines to prevent them from getting too tangled and overgrowing the alleys between rows.  Marketing has been interesting – last year, when the growing season seemed to get pushed back so far, the bulk of his crop wasn’t ready until late August and early September – at which time HyVee told him that watermelon season was over, and they didn’t want his product!  He was able to move it through some schools, but had a refrigerated truck full of unwanted melons for a bit…yikes! 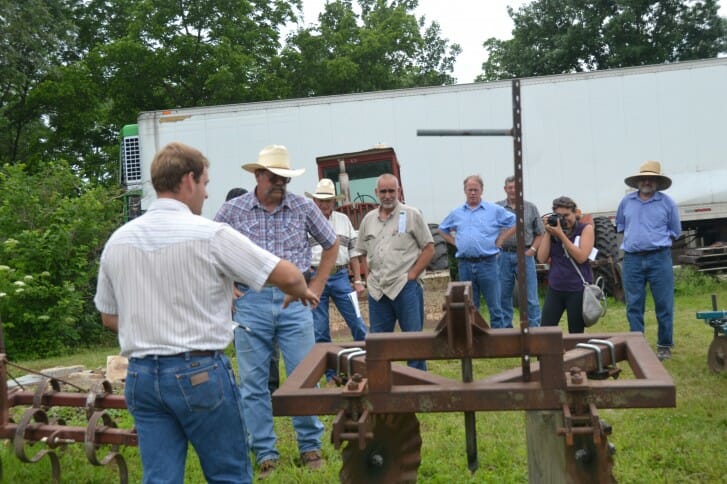 Wade Dooley points out the modifications he made to some equipment to help cultivate watermelons.

The group walked by Wade’s assorted equipment, some of which he’s modified for use with these crops.  Shorter, smaller tillage implements fit nicely between watermelon rows, and he and a friend developed an extremely heavy, if effective, mound builder for watermelon field prep. 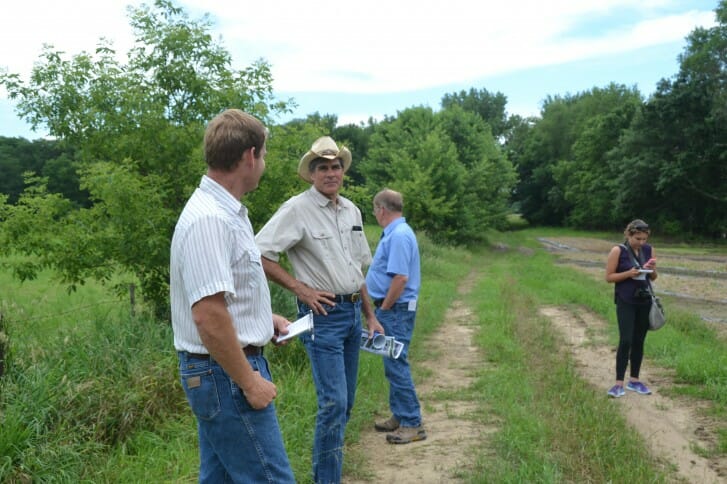 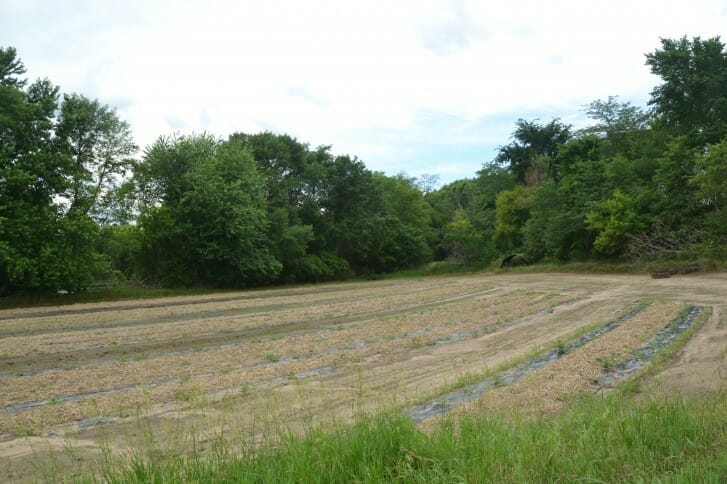 Wade also walked the group by a few acres of popcorn.  While originally planted half for fun – a friend had an old cornpicker he wanted to play around with now and again – he said that marketing it through Iowa Choice Harvest and the Des Moines Farmer’s Market has made it pretty profitable!