Fred and Vicki Abels, of K&A Acres Inc, hosted their second wonderful field day in less than a year.  Almost as a follow-up to last fall’s meeting and discussion on cover crops, soil health, and alternative grazing strategies, Fred invited experts on all topics to his farm for an afternoon of lectures and in-field learning.  Fred serves as a commissioner on the Grundy County Soil and Water Conservation District board, which was a generous sponsor of the field day.

Terry Basol, an Iowa State Extension Specialist, spoke on the soil health benefits of cover crops.  Cover crops provide organic matter to the soil and increase water infiltration rate through root penetration of hardpans.  They also retain and recycle nutrients, whether fertilizer- or soil-based.  Both by holding soil in place through anchoring roots, and improving water-holding capacity to prevent runoff, phosphorus and nitrogen are kept where they should be – in the soil where plants can utilize them.  Cover crops also take up some of these nutrients in their tissues, which then break down after winterkill or spring termination, and release the nutrients for the next crop.  This strength of cover crops, Terry explained, is why they are so highly recommended in the Iowa Nutrient Reduction Strategy.  The only management technique that reduces both N and P loads to groundwater, cover crops are also an excellent way to improve soil quality and farm resilience. 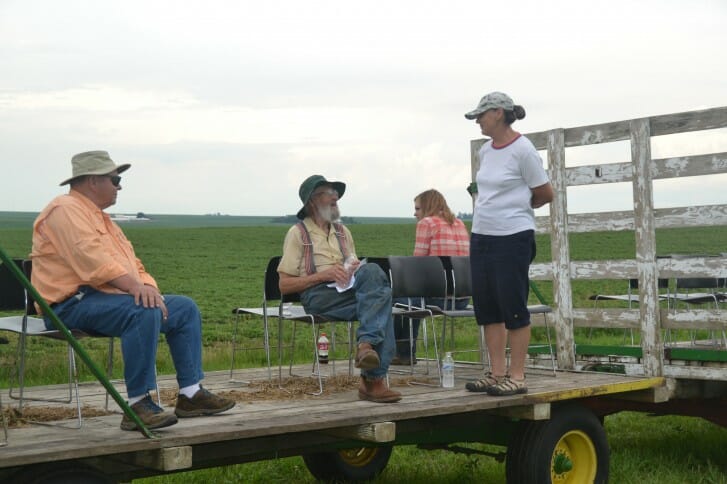 Terry was followed by Lance Gunderson, a graduate student and representative of Ward Laboratories in Kearney NE.  Ward Labs is one of three soil testing laboratories to perform the Haney Soil Test, a novel method of determining soil nutrient status and making fertilizer recommendations.  With relatively little known about the test but farmer interest levels increasing, Fred and PFI worked with Lance to get some information out there.  Lance explained that the Haney Test, unlike traditional soil tests, tries to quantify the soil-based nutrients that are easily accessible by roots or can be converted into plant-available forms by soil microbes.  Mild organic solvents – rather than harsh chemicals – are used to extract the nutrients for analysis.  Because the test measures nutrients that *may* become available to crops, the soil test levels are greater than those of conventional tests; thus, the fertilizer recommendations it yields will be to put less fertilizer on, compared to conventional soil tests.  Lance was quick to note that he doesn’t recommend that farmers get rid of their past management!  The Haney test is scientifically backed-up, but interpretations are still being worked on.  Just because nutrients *may* become available, does not mean that they will.  Management can influence this, as can weather and soil conditions.  Producers using the Haney test should keep this in mind when deciding what fertilizer plan to use.  Lance suggests sticking with the fertilizer recommendations the farmer is comfortable with – but perhaps leaving a few acres or a test strip to manage according to Haney recommendations.  The Haney test also features the Solvita CO2 burst test, which measures microbial activity as a flush of CO2 production from rewetted soil.  Organic carbon and nitrogen concentrations are measured (as opposed to just the inorganic forms determined by conventional soil tests).  These are used to calculate an organic C:N ratio, which like traditional C:N ratios suggests the soil amendments and cover crops that would be most beneficial.  Altogether, the values are plugged into an equation that yields a Soil Health Value, a number on a scale of 0-50 suggestive of the current soil status.  The higher the number, the healthier the soil.  Lance provided some basic “good” and “bad” parameters for these values, but acknowledged that parent soil material, management, and location can greatly affect both the score and the potential maximum value that soil could ever achieve.  Lance ran through some of Fred’s soil test values, pointing out how in some samples the C:N ratio was better than others, but the overall soil health score was not.  Some fields had greater concentrations of C and N, while others had higher microbial activity.  The soil health score takes all those variables and generates a single value, making it easy to compare and contrast fields and management styles. 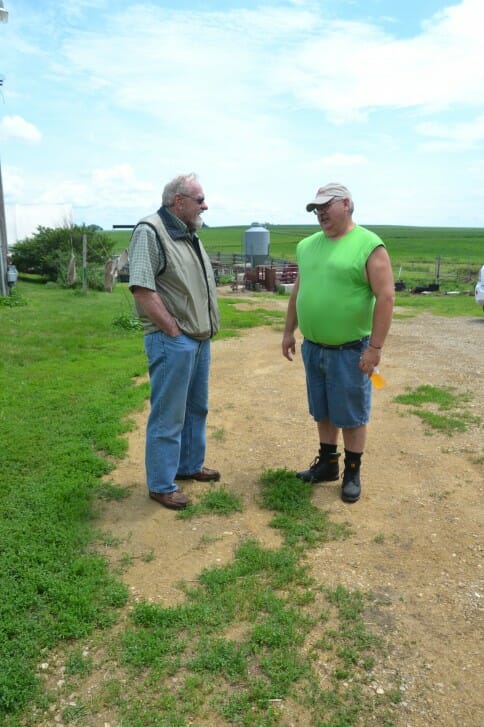 This being PRACTICAL Farmers of Iowa, the lecture session was followed with some real groundtruthing.  Out to the fields we went!  A local NRCS agent brought a soil penetrometer, and the group went out to see how some of Fred’s fields fared with that test.  Soil penetration resistance is a measure of compaction – as the probe is inserted into the soil and pushed down, the pressure required to keep it moving is reflected in a dial on top of the penetrometer.  For ease of use, the dial is divided into green, yellow, and red regions – corresponding to low, medium, and high compaction.  Fred’s no-till corn and soybean fields were both soundly in the green region, as was a strip of hay/grass along the edge of the fields.  Only directly in the tractor’s tire tracks did it take much effort for the probe to be inserted.  Apparently his soil is just too healthy! 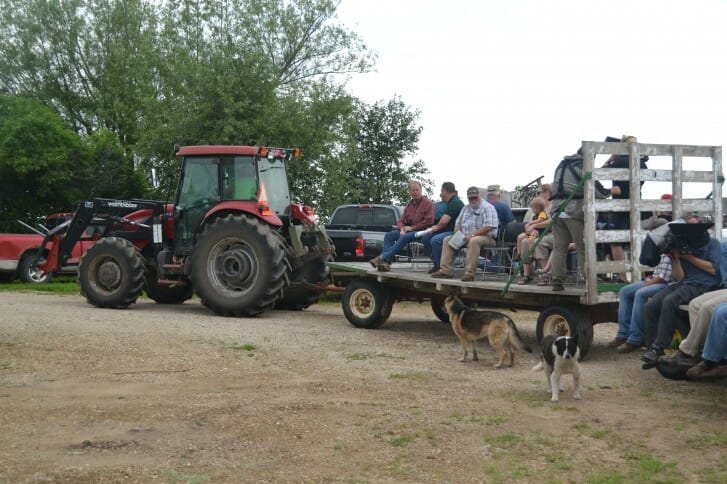 Attendees at Fred Abels’ field day get a hay wagon ride out to the fields. 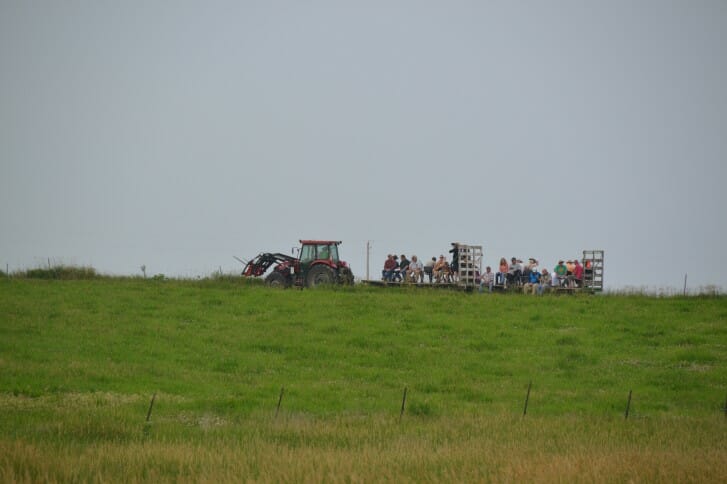 Out in the field at Fred Abels’ field day.

Fred will continue his use of cover crops and reduced tillage to keep his soil healthy and improve those soil health scores.  He is also planning to reduce fertilizer inputs, based on the results of the Haney test.  Over time, hopefully he will see even better pasture and crop growth, soil resiliency to drought and flooding, and a healthier ecosystem overall.  And PFI will definitely be back for another field day! 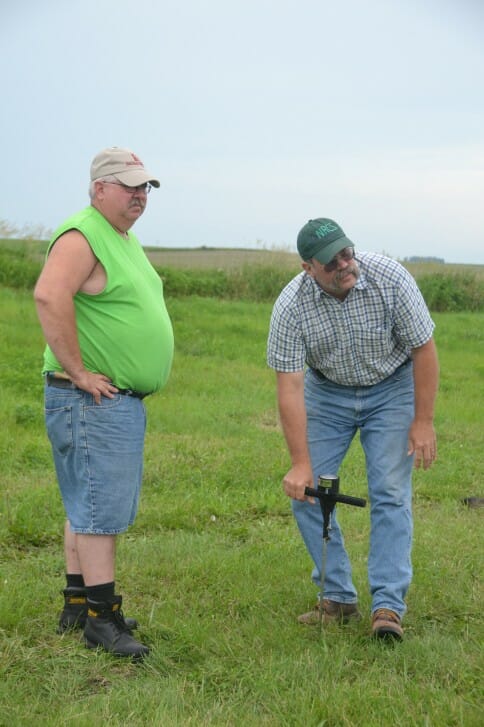 No trouble with compaction – pushing a soil penetrometer into Fred Abels’ fields is a piece of cake.