Among questions related to cover crops for vegetable production, we receive many inquiries about the best cover crop options for asparagus patch. I interviewed several PFI farmers who are currently using soybeans in their asparagus patch about their experiences. 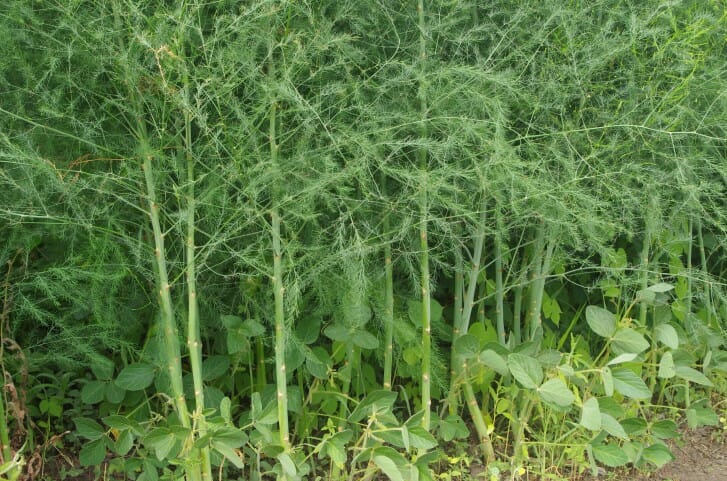 Why soybeans in asparagus?

Andy Dunhams (Grinnell Heritage Farm): ​I got the tip from a Michigan asparagus grower at the MOSES conference when talking about weed pressure in organic asparagus.​

Mark Quee (Scattergood Farm): We use soybeans because they fix nitrogen, canopy quickly to suppress weeds, are relatively affordable and fit well with the timing.

Ben Sanders (Wabi Sabi Farm): I chose to plant soybeans into my asparagus patch because I saw how much of a difference it made in Grinnell Heritage Farm’s asparagus patch. I’ve seen their patch at least once every year since establishment and seen the improvements there so decided to try it for myself. By far the scariest thing I’ve done in my life was taking my tractor and tiller into my four year old asparagus patch – I couldn’t sleep well until I saw all the asparagus fronds popping back up!

How do you plant soybeans?

Andy Dunhams (Grinnell Heritage Farm): ​We plant the soybeans immediately after the final harvest of the season.  We mow, lightly till, (deep enough to uproot the weeds, but not so deep as to damage the crowns), broadcast, and then use a spring tine harrow to bury the soybeans.​ You could drill them if you had a drill. The higher seeding rate than recommended rate is better. This year we planted 250 pounds per acre and will likely plant 350 pounds per acre next year.  The cotyledons of the plants actually provide shade to compete with weeds at that high rate.​ I use the cheapest organic variety available.  We usually by a Viking brand organic soybean from Albert Lea Seed.​

Mark Quee (Scattergood Farm): We drill soybeans usually the second week of June after mowing the patch and then doing a shallow, weed-killing tilling. Of course this is dependent upon soil conditions being right. We sow them thickly on seven inch row spacing…I’m not sure how it would translate into pounds per acre, but it is a very high planting density. We usually use the cheapest organic soybean offered by Welter Seed and Honey. We usually graze the soybeans (and whatever weeds fought through them) with our sheep flock in September or October.

Ben Sanders (Wabi Sabi Farm):  This season I planted the soybeans around the second week of June. I probably could have gotten another week of harvests (around 40-70 lbs.) from the patch, but there was some great soaking rains predicted (which we got) that weekend so I decided to stop harvesting and get the soybeans planted for good germination.  The method I used was mowing the asparagus patch as close to the ground as I could. After mowing, I tilled the patch (approx. 3-4 inches in depth) and this was very scary to me as I saw the white parts of the asparagus spears flying through the air. After tilling, I spread the soybean seed at a rate of approximately 200 pounds per acre.  Once the seed was broadcast by hand, I then went over it with my tractor and disc to bury the seed.  The disc never went below 1.5 inches deep.  I used an Earthway hand crank over the shoulder broadcast spreader to spread the seed and used approximately 150 pounds of seed for my 1/2 acre patch. I’ve learned that when using one of those over the shoulder type of seeders, it is better to spread a little more than the recommended rate for a good stand of any cover crop. Andy (GHF) ordered extra seed for me – the cheapest Viking brand organic soybean from Albert Lea. 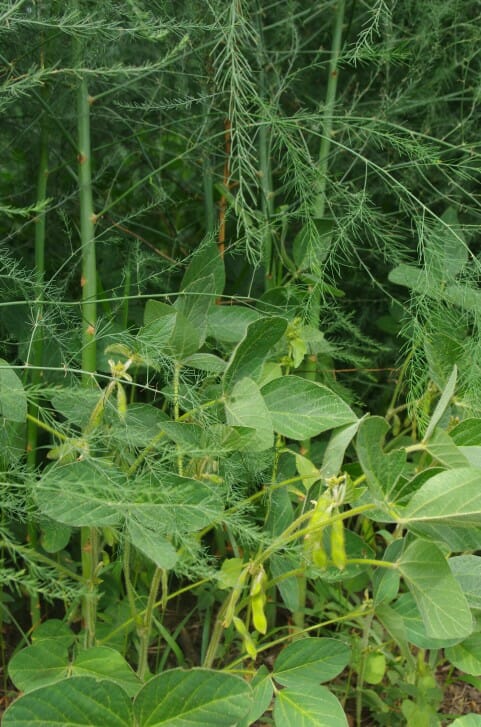 What benefits have you noticed?

Andy Dunhams (Grinnell Heritage Farm): Our yields have gone up, our weed pressure has gone down– it is easier to harvest when the weed pressure is less.  We get to fix some atmospheric nitrogen in a perennial, non-legume field.​

Mark Quee (Scattergood Farm): We like the weed suppression and nitrogen fixing. Also, soybeans are easy to manage: we pretty much sow them and ignore them. We have been able to control a patch of giant ragweed with this practice.

Ben Sanders (Wabi Sabi Farm): Since this is my first year of using soybeans in my asparagus patch, I don’t think I can comment well about all the benefits that I could possible reap.  What I have noticed already is that there are far fewer weeds popping up in this patch and the fronds are so much more of a darker green that I feel like already they are benefiting me from the extra nitrogen provided from this legume cover crop.  I have another 0.3 acre patch (over 10 years old) that I didn’t plant soybeans into and the color difference between the fronds of the two patches is obvious. The difference in the intense green color of the patch with soybeans compared to my other patch without a cover crop is astounding!  I remember the weed pressure in the new patch over the last few years and don’t see many of them even emerging under the dense soybean canopy so am very hopeful of the weed suppression benefits this method could give me. Also from a plant physiology perspective, the intense dark green of the fronds with soybeans makes me feel like the energy these asparagus crowns are probably producing will make for greater harvests in the future.

Have you used other cover crops in your asparagus patch as well?

Mark Quee (Scattergood Farm): Yes. Early in the spring (early March if soil conditions allow) we burn the old asparagus fronds (the sheep leave them behind), then shallow till and drill in chickling vetch. The final harvests can be annoying when the vetch gets pretty tall, but early on it is a good weed suppressant and also fixes nitrogen. It also supports abundant insect life.

Ben Sanders (Wabi Sabi Farm):  Yes, last year I planted buckwheat into the asparagus hoping for higher potassium levels (from the buckwheat organic matter) and weed suppression.  That year I shallowly disced the asparagus patch after our last harvest, spread the buckwheat seed and then even more shallowly disced the patch for seed to soil contact.  After I did all this, we didn’t get any rain so there was very poor germination of the buckwheat so I can’t comment on how well this would have worked since I had very poor germination and I only tried it for one year.

Any advises for those who are thinking of using soybeans in asparagus?

Andy Dunhams (Grinnell Heritage Farm): If you have not tried it you should.​

Mark Quee (Scattergood Farm): Just do it. Set your tiller pretty shallow and then just trust that you are helping your asparagus, not hurting it.

Ben Sanders (Wabi Sabi Farm):  My tips would be to “just do it”.  After harvesting over 600 lbs. of asparagus from the patch this year it was very scary for me to till it up for the soybeans. I got off the tractor every 40 ft. while tilling 10 beds that are each 325 ft. long to make sure I wasn’t doing much “damage.”  Then, I couldn’t sleep well for the next 3 weeks worrying about it until I saw the asparagus popping back up and the soybeans began germinating.  I’m hoping this practice will be easier on me mentally after suffering the first year using this method, but only time will tell.  Another “tip” I will offer when using this method (or cover cropping in general) is to spread around twice as much the recommended rate if you aren’t using a drill to plant with and spreading them by hand.