*Read more about John Whitson’s project with growing Dan’s blue-blond sweet corn in the fall issue of The Practical Farmer, which should be in your mailbox soon!

Breeding corn for seed has become a fun pastime for me, maybe because the plants are big and results are apparent soon. However, it’s a pastime that requires either a totally closed environment for breeding or labor-intensive hand-pollination, to ensure that pollen from other corn breeds in an area doesn’t mix with the pollen of the corn you’re trying to develop. This year I planted, hand pollinated, harvested and saved seeds for Dan Specht’s blue blond sweet corn with the seeds that I received from Jack Knight in spring.

Since most of us don’t have access to special, controlled fields or facilities for corn breeding, it isn’t possible to grow corn for seed in isolation from other cultivated fields – which, with Iowa being a corn state, means there are probably lots of nearby fields that can spread pollen quite a distance. While good-quality corn pollen isn’t viable for long – maybe an hour-and-a-half on a warm summer morning – it can be carried by insects and the wind quite a distance in a short time, and corn plants can shed fresh pollen daily for several days

One strategy that often works well for avoiding unwanted pollen drift is to plant later, as the commercial growers are usually racing for that May 15 planting date to avoid yield reduction. Their pollen will be spent and not viable for cross-contamination with corn that is planted later. This isn’t foolproof, though: When commercial fields flood, those growers might replant even small plots that will end up shedding pollen later on and could still mix with your seed corn.

So when hand-pollinating, extra steps are needed to protect the purity of your corn. I planted Dan’s blue-blond sweet corn in mid-June at Lisa and Andy Bean’s  Quilted Acres near Waukee, which worked out perfectly as commercial corn plots in the area passed through pollination a week or two before Dan’s corn developed to that stage.

Here are the steps I took with Dan’s corn:

1).  Looked for tassels and ears. The first step was to watch for developing ears, because that meant the corn silks that collectively form the ears were soon be ready to receive pollen. When I saw tassels begin to emerge, that was the signal to start looking for ears. “First ears” are those that grow near the top of a corn plant. They have the most vigor and are best for seed. With Dan’s corn, the earliest emerging ears weren’t “first ears,” despite the name; the earliest ears emerged lower on the plants, with the first ears emerging a week later. Often, only the first ears are bred and saved for seed and the second (or earlier) ears are great for eating.

2). Placed ear shoot bags. I placed an ear shoot bag a few days after the ear is detected. That gave the ear time to grow a little before any silk emerged. As the ear shoot emerges out of a “leaf collar,” the juncture of leaf and stalk on the upside of a leaf. I opened the shoot bag just enough to contain the ear while pulling the bag down along the stalk of the plant. Then I sliced the leaf collar a few inches to set the bag tight and secure between the leaf collar and the stalk.

3). Collected pollen. The first anthers on the upright branch of the tassel began to dangle. That was the sign that pollen was shedding. Tassel anthers began shedding pollen at the top of the upright tassel branch, then opened up progressively down the tassel. I held a brown paper bag that had been folded lengthwise in the middle under the tassel while gently shaking the tassel to drop pollen onto the bag. Fresh, viable pollen appeared almost white and had a very fine consistency. A tassel can shed good pollen for five to seven days under good conditions. Expired pollen would have been more yellow and appears granular. Good pollen usually sheds from 9-11 a.m., so a morning can be ruined by high winds and storms using this method of pollen collection. Every ear silk pollinates only one kernel of corn. The first silks to emerge correspond to the bottom kernels of an ear. When growing for seed, it’s not important to produce ears that are filled out with kernels at the top of the ear. One good grain of pollen is all that’s needed on each silk to form one corn kernel.

This year, I planted 500 seeds (only blue seeds) from a generous donation by Jack Knight. If all the plants were the same, I would have gathered pollen from any tassel and poured onto any ear silks. But though plants all looked identical during early development, 10 percent expressed red-colored tassels as well as red in their silks; 90 percent expressed light-yellow or blond colors on tassels and silks. Without knowing the corn’s background history, I’m not sure why that happened. The seed source was mixed from different ears, and though all the seed was blue, maybe the plants that expressed red came from the same seed ear?

In this year’s pollination, I segregated red plants from blond plants in the pollination process; I noted red-tassel pollen when applied to blond silks and to red silks, and vice versa.  I also noted blond pollen when applied to red-silk and blond-silk plants. Simply writing that note on the final pollination bag made it easy for me to keep the mature seed ears separate after harvest at drying time. A small number of plants were self-pollinated by collecting pollen from a tassel and then pouring onto silks on the same plant. I also bagged them with notes for protection.

When keeping pollen types separate, it is good to use a different pollen collection bag for each type of pollen. These bags can be re-used for days to collect pollen, because any pollen still in the bag from the day before will have expired (and thus won’t interfere).

Next year, I intend to plant seven basic plots:

The hand-pollination process will be much more complicated than this year, but it will be interesting to see what traits are expressed. Dan Specht was breeding to encourage the blue color and I hope to make progress on that goal.

Just like so many aspects of gardening and seed-saving, corn-pollinating involves paying strict attention to a few simple details. I’m anxiously looking forward to next year! 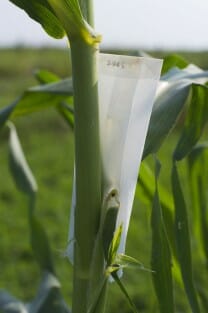 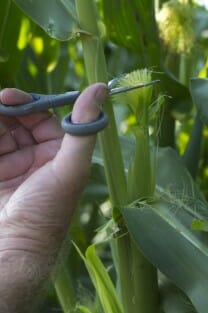 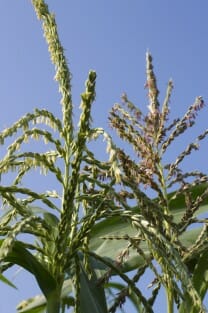 Tassles with anthers hanging, ready to emit fresh pollen….(this picture exhibits the ‘blonde’ vs. ‘red’ characteristic of this sweetcorn in the tassles) 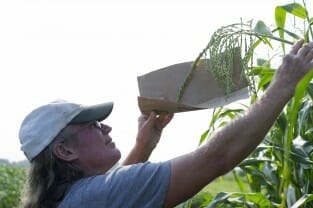 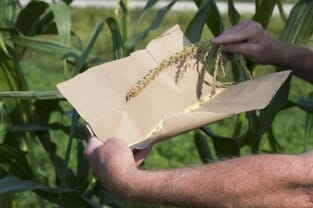 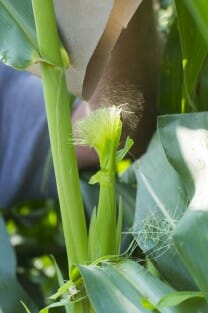 Pollen slides out of the collection bag directly onto the ear silks. 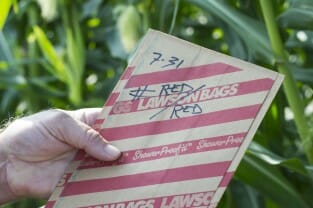 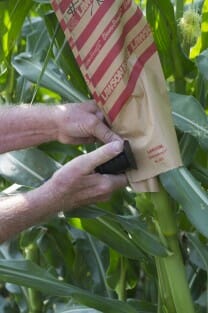 Stapling ear bag over the ear and around the stalk until harvest, identifying the ear and offering a little protection from insects and any wayward pollen in the breeze.