Many Iowans wonder how many farmers are using cover crops and if the trend will continue.  Research recent from Datu shows that many are using cover crops. Conservation agriculture can create far-reaching environmental and economic benefits, but farmers may require help bearing short-term risks and costs, according to a new study released by global consulting firm Datu Research http://www.daturesearch.com. The study found that 23% of Iowa respondents were using cover crops, mostly on fewer than 100 acres, suggesting that farmers may be trying them out before committing to adoption on a larger scale. 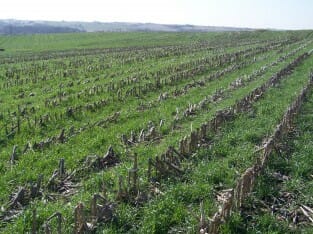 Almost half (47%) reported using no-till—a practice in which seeds are drilled into undisturbed soil—but only 21% had continued the practice over many years. Only 4% used strip till (tilling and planting in only a narrow band).

The study, “Adoption of Conservation Agriculture: Economic Incentives in the Iowa Corn Value Chain was prepared for the Walton Family Foundation.The authors flag an important obstacle to wider adoption: the time lag farmers face before their yields increase, which in some cases could take years.

“We set out to find the economic win not just for farmers, but for the businesses they deal with,” said Sarah Mine, lead author. “The idea is to find other actors who are willing to share the short-term costs and risks, to gain a greater return in the long run.”

Since 55% of farmland in Iowa is rented, Datu analyzed the potential economic gain for landowners who rent to farmers using conservation agriculture. Until adequate data on yield increases are available, the practices are unlikely to increase land value. However, certain landowners could see an economic benefit from reductions in input costs.

In Iowa, 14% of farmland leases are crop share or custom arrangements, in which the landowner supplies some or all inputs. These landowners could indeed benefit economically from farmer adoption of conservation agriculture, which reduces, to varying degrees, use of fertilizer, pesticides, fuel, equipment, or labor.

Tapping the insurance opportunity would require bold changes in federal policy and much more data on yield impacts. Yet farmers do have existing insurance-related options. One is Prevented Planting Payments (PPP), a common mechanism that covers farmers who cannot plant an insured crop by the required planting date—due to, say, sustained rainfall.

Of the Iowa farmers in the Datu study who had received a PPP, 66% had chosen to plant cover crops on their prevented planting acres.

Another insurance option is Whole-Farm Revenue Protection (WFRP), a new pilot program required by the 2014 farm bill. WFRP will allow producers to insure their entire operation under a single policy. By offering a premium subsidy to farmers who produce two or more commodities on one farm, WFRP could incentivize crop rotation.

To further develop economic incentives for farmers, the study recommends systematic research on the yield effects of conservation agriculture.Yield effects are likely the most critical piece of information a farmer, landowner, or crop insurer can have about a management practice.“Conservation agriculture translates into economic value and environmental  sustainability for future generations,” says Mine, “A fair share of the economic benefit really should accrue to farmers.”