The Mass that Inspired a PFI Legacy 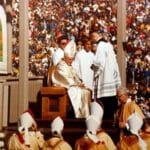 Next Sunday, January 11th, Mary Swander’s play Map of My Kingdom will be performed at Living History Farms in Urbandale. It is hard to imagine a more appropriate venue. It was on this spot in October 1979 that Pope John Paul II said a Mass that changed farmer Tom Frantzen of New Hampton–and led he and his wife, Irene, on a long journey toward a more sustainable farm and legacy. Their journey provided inspiration for one of the stories included in Map of My Kingdom.

Below are excerpts from the Pope’s homily given that day:

“Here in the heartland of America, in the middle of the bountiful fields at harvest time, I come to celebrate the Eucharist. As I stand in your presence in this period of autumn harvest, those words which are repeated whenever people gather for the Eucharist seem to be so appropriate: ‘Blessed are you, Lord, God of all creation, through your goodness we have this bread to offer, which earth has given and human hands have made’.

“As one who has always been close to nature, let me speak to you today about the land, the earth, and that ‘which earth has given and human hands have made’.

“… To all of you who are farmers and all who are associated with agricultural production I want to say this: the Church highly esteems your work. Christ himself showed his esteem for agricultural life when he described God his Father as the “vinedresser” (Jn 15 :1). You cooperate with the Creator, the “vinedresser”, in sustaining and nurturing life. You fulfill the command of God given at the very beginning: “Fill the earth and subdue it” (Gen 1 :28). Here in the heartland of America, the valleys and hills have been blanketed with grain, the herds and the flocks have multiplied many times over. By hard work you have become masters of the earth and you have subdued it. By reason of the abundant fruitfulness which modern agricultural advances have made possible, you support the lives of millions who themselves do not work on the land, but who live because of what you produce. Mindful of this, I make my own the words of my beloved predecessor Paul VI : “It is the dignity of those who work on the land and of all those engaged in different levels of research and action in the field of agricultural development which must be unceasingly proclaimed and promoted” (Address to the World Food Conference, November 9, 1974, no. 4).

“… Recall the first words of Jesus in the Gospel we have just heard, words of gratitude to his heavenly father: “Father, Lord of heaven and earth, to you I offer praise”. Let this be your attitude as well. Every day the farmer is reminded of how much he depends upon God. From the heavens come the rain, the wind and the sunshine. They occur without the farmer’s command or control. The farmer prepares the soil, plants the seed, and cultivates the crop. But God makes it grow; he alone is the source of life. Even the natural disasters, such as hailstorms and drought, tornadoes or floods, remind the farmer of his dependance upon God. Surely it was this awareness that prompted the early pilgrims to America to establish the feast which you call “Thanksgiving”. After every harvest, whatever it may have been that year, with humility and thankfulness the farmer makes his own the prayer of Jesus: “Father, Lord of heaven and earth, to you I offer praise”.

“… the land must be conserved with care since it is intended to be fruitful for generation upon generation. You who live in the heartland of America have been entrusted with some of the earth’s best land : the soil so rich in minerals, the climate so favorable for producing bountiful crops, with fresh water and unpolluted air available all around you. You are stewards of some of the most important resources God has given to the world. Therefore conserve the land well, so that your children’s children and generations after them will inherit an even richer land than was entrusted to you. But also remember what the heart of your vocation is. While it is true here that farming today provides an economic livelihood for the farmer, still it will always be more than an enterprise of profit-making. In farming, you cooperate with the Creator in the very sustenance of life on earth.”*

The video below includes PFIer Maria Rosmann’s recollections of that special day. Maria was fortunate enough to talk with the Pope during his Iowa visit.