Farm Legacies: Sacrifices My Parents Made 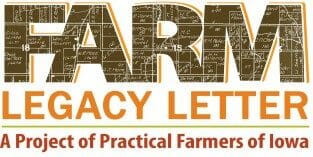 Farmland owners: What matters most about your farm? What do you want your farm to be in 30 years? Have you spent the time to document this? Communicate with your heirs about it? Twenty hearty souls gathered for a short course at the PFI annual conference to make great progress on answering these questions, including Twyla Hall, of Bettendorf. Reprinted here (with permission) is her Farm Legacy Letter.

To my future generations:

My farm is 160 acres and is one-half mile south of Kamrar, in Hamilton County, Iowa. My parents bought the farm in 1939, and I moved there when I was four. When my father died, my mother cash rented it. When my mother, died my brother and brother-in-law took over cash renting it. I inherited it in 2004, and it is owned free and clear.

The farm is in corn and beans with 40 acres of wetlands. The wetlands were put in as part of the Wetlands Reserve Program in 2002, and they come out of the program in 2017.

In the past the farm had corn, beans, hay, straw, hogs, chickens, milk cows and teams of horses. My brother and brother-in-law used crop rotation. There were quite a few building that are no longer on the farm, including brooder houses, cribs, a granary, playhouse and bins. The pasture where the horses were is now half-farmed and half-yard.

The lack of running water is one of my strongest memories about the farm. Beginning when I was six, I had to take water to the chickens. When I was 11, my father broke his leg, and we soon realized that the man he hired to milk the cows was not milking them dry, so my brother and I took over the milking. One winter it snowed so much, and the path we shoveled to the barn was just wide enough for me to walk sideways with two milk pails.

My strongest visual memories about the farm include the straw stack when they did the threshing. I also remember the baby kittens. I wouldn’t give up until I found them, and then the farm cat would move them, and I would have to find them again. I remember playing tag around the farm building, and sometimes we would run up and over the buildings to keep from being tagged.

I remember the tastes of sweet corn, my mother’s homemade bread, cucumbers, raw rhubarb without sugar, peaches, and roast chicken dinner in the oven.

The touch I remember best is Mom’s fur coat. If I was cold, I would put on that coat and sit in the rocking chair by the stove. It would be so warm! I remember the sounds of roosters crowing in the morning, and the owl that would hoot all night. I hated that owl. I also remember the birds in the morning as well as the cows bellowing.

Big events on the farm that particularly stand out for me are when we got a tractor, and when we got running water and a bathroom. A negative event was when my brother and I got measles, then chicken pox, then whooping cough. We missed so much of school that the teachers came out to the farm to help keep us keep up. We wouldn’t have passed that year without that help, and we were very grateful.

Thirty years from now, the number one goal I have for my farmland is to keep the land together. This is my very top goal because my mom and dad sacrificed to pay for this farm and make a living and pass it on to the next generation. Inheriting this 160 farm and being able to have this asset humbles me.

I hope that my children will preserve the land and the farm for my grandchildren, and that my heirs share alike: in income, in paying taxes, tiling and planting trees as a wind break. I also do not want future generations to borrow on the farm. I want this farm to be a place for my family to live if times get bad. You could have some beef, pork, chickens, and a garden, and have a roof over your head.

What is most important to me about how my farm is managed is that the ground is taken care of and the weeds are kept down. Rotating crops is really important, and so is returning the nutrients that are needed. It is important to me that my children manage the farmland without arguing about what to do about the land. I want to keep it in the family, and not have others, such as my children’s spouses, convince my children to sell it.

My farming philosophy is to honor the work of my parents, who put so much into the farm to keep it together as a single farm. I also believe in improving the land where you can, such as fixing tiling when it breaks and staying on top of things.