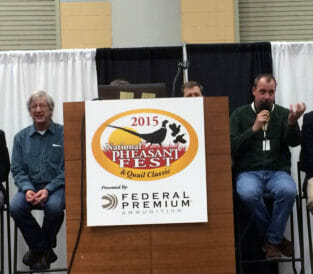 Dick Sloan, who farms near Rowley, was awarded with one of seven “Conservation Faces of Iowa” awards by Pheasants Forever for his conservation efforts. Growing up
near Lime Creek, he first became interested in biology and the natural world as a young boy. Since then, conservation has been a top priority on his farm. “Our farms develop the character of the farmer.”

Dick also talked about his efforts to improve water quality in the Lime Creek watershed. The creek is historically home to a number of native freshwater mussel species, but due to a decline in water quality, many of those mussels are no longer found there. Not only do increased nutrient levels contribute to drinking water problems and the dead zone in the Gulf of Mexico, nutrients and sediment cause problems for creatures like mussels and many species of fish, which rely on clean, clear water to survive. To reduce soil erosion and nutrient loss on his farm, Dick practices no-till farming,  uses cover crops and diverse crop rotations, and incorporates riparian and upland prairie buffers to reduce soil erosion and nutrient loss from his farm.

He’s also noticed that the same practices that improve water quality have the added benefits of attracting wildlife. Cover crops can provide a little ground cover, but when crops such as rye and oats are harvested for grain, they have the chance to reach their maximum height at the same time when birds like pheasants are nesting. “Small grains present the opportunity for cover,” he says. He says that he’s seen an increase in mourning doves since adding cover crops and small grains to his rotations.

Seth Watkins farms near Clarinda, where he employs various strategies to improve the quality of the water that leaves his farm. He says that his business model depends on protecting natural resources and improving water quality. In addition to growing corn, oats and hay, and raising rotationally grazed cattle, he owns an outfitting business that attracts deer hunters from around the country.

Seth says he talks with other farmers about efforts to reduce soil erosion, he hears people talk about wanting to remove grass waterways. He says that by solving our soil and water conservation problems, we can solve social and economic problems at the same time. “What if we had more real waterways full of pheasants and quail? I still  remember filling our cafes and hotels every pheasant season. And that was good for commerce. That sustained my community.” Among other conservation practices, Seth was one of the first farmers in Iowa to incorporate prairie buffer strips, working with the STRIPS team at Iowa State University.

Is wildlife habitat important on your farm? Has hunting been important now or in the past for your community? Have you noticed changes in wildlife based on your farm management practices?