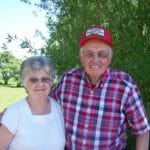 From The Keeney Place: A Life in the Heartland by Dennis Keeney:

In my opinion, Dick Thompson, now deceased, and his wife, Sharon, should be considered Iowa’s legacy sustainable agriculture farmers. They left conventional farming in 1968 and set out to find and demonstrate better ways to farm. Everything they discovered and recommended to other farmers was backed up by research conducted on their own farm. Dick and Sharon spoke widely and made many advocates. I became an ardent one after hearing them in Madison in 1986. The previous year, in 1985, Dick, Sharon and Larry Kallem had founded the non-profit Practical Farmers of Iowa with the express purpose of conducting collective on-farm research and demonstration throughout Iowa. The Thompsons’ farm in Boone, near Ames, served as the showcase and as the organization’s headquarters. I grew to know them well, spoke at many PFI meetings and attended their ever-popular field days. I have no doubt that PFI was one reason the Leopold Center was so well accepted by many Iowa farmers.

The searing drought continued in to the fall of 1988. A photographer and I went on a fly-over of central Iowa to see how the landscape had fared. It was an eye-opener as the landscape looked very different from 1,000 feet. What struck us was the brownness of the fields; the only green spots were occasional small parks, cemeteries and the sustainable Thompson farm. Their cattle pasture, the corn, and the soybeans were withstanding the drought better than any other farms we could see. In 1993, during the height of the mid-July floods, I repeated the flight. Again, that same farm stood out. No flooded fields were to be seen on the Thompson property. It was obvious that Dick and Sharon treated the soil differently from their neighbors. They used a tillage method called “ridge till” and were careful to avoid crossing their fields with heavy equipment too often. They didn’t use herbicides and kept the soil loose by cultivating. Organic matter was returned to the soil with sewage sludge from the Boone waste treatment plant and manure from their hog operation. Judicious crop rotations enhanced organic matter in the soil, too. The sludge added phosphorus and the rotations and manures added nitrogen; only potassium was needed from fertilizer. Their crops were excellent.

What we couldn’t see from the air was the animal husbandry on the farm. Hogs raised in typical Iowa commercial intensive swine operations lead tough lives. They are jammed into enclosed buildings housing 1,000 or more animals in conditions that prohibit much movement. By contrast, Thompson let the hogs on his farm roam outside in lots with deep cornstalk bedding. Dick, who earned his degree in animal science, was convinced that corn grown on mega-farms was low in micronutrients. He insisted his hogs eat only corn from his nutrient-rich soils. Thompson’s pigs also were exposed to a mix of beneficial bacteria through the bedding and didn’t need the prophylactic drugs required by confinement-grown pigs. The bedding became compost, a perfect fertilizer for the corn land. His beef was grass fed and even then brought premium prices from those who were concerned about the nutritional quality of mass-produced beef. Later, we were to use his swine rearing concepts in our work on hoop houses.

The Thompson farm came as close to a sustainable farm as I could imagine, especially in central Iowa in 1988. Over time, PFI advocated improved on and modified Dick’s philosophy. They never claimed that one size fit all, which from my point of view is a major flaw of industrial agriculture. Someday I hope to see a “Sustainable Agriculture Hall of Fame.” Dick and Sharon will be the ones we idolize. Today, PFI farmers, all of whom have benefitted from the Thompsons’ vision of a more sustainable agriculture, cover the range of farming from one to 1,000 acres or more. I like to think the Keeney Place [the farm I grew up on] would have been an active PFI member.