A book review of The Keeney Place: A Life in the Heartland by Dennis R. Keeney

One might think Dennis Keeney is nostalgic when he thinks about the 200-acre farm he grew up on near Runnells, Iowa. “The Keeney Place” was close enough to the Des Moines milk market to make milking dairy cattle a reliable source of income. His father planted corn for two years and then planted oats with alfalfa. The oats protected the alfalfa when it was getting established. Alfalfa added nitrogen back into the soil and was a key part of the dairy cows’ diet. After two or three years of alfalfa, fields were planted back to corn, which in turn, used the nitrogen the alfalfa plants had added to the soil.

Plus the farm had a house, outbuildings and a “glorious barn that was a landmark in the region, constructed of hollow tiles, two layers thick and four stories high, perched on a ridge.”

All of that is gone now.

Nostalgia is a longing for the past. Keeney most certainly misses his family and his family farm, but what he describes in his book is really a search to clearly define his vision for Midwest agriculture — and his place in working toward that vision. 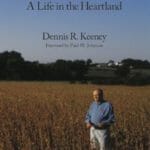 What matters most to Keeney corresponds well with the vision of Practical Farmers: Farms prized for their diversity of crops and livestock, their wildlife, healthy soils, innovations, beauty and productivity. Food celebrated for its connections to local farmers, to seasons, to hard work and good stewardship. Places where the working landscape, the fresh air and the clean water remind us of all that is good about Iowa.

It took Keeney awhile to get there. He did his undergraduate and graduate studies (at Iowa State University and the University of Wisconsin) between 1955 and 1965, a period of “some of the greatest agricultural changes in American history,” he writes. “Farm numbers dropped fast and the remaining farms were much larger. Tractors became far more common and were much larger and more powerful … The vast technological system from World War II was being redirected toward farming. New plant varieties, insecticides, fungicides, weed killers, machinery, fertilizers and large confinement systems changed agriculture so dramatically that farms like the Keeney Place had a tough time keeping up.”

The land grant colleges led the way to this focus on farm size and efficiency, Keeney writes, and he minces no words in describing the failures of the current system: “Conventional, including industrial, agriculture is the foundation of almost all Land Grant colleges of agriculture. Their political base lies in the agribusiness community of fertilizer manufacturers, wholesalers and retailers, and increasingly, very large scale farmers. Supporters for business-as-usual include international conglomerates, multinational pesticide and seed producers, and powerful statewide and national farm lobbyists… These groups have a vested interest in keeping the research system going as is. Research provides the industry with new products at low cost and university training yields employable graduates.”

Keeney reports that the 1938 publication Soils and Men: Yearbook of Agriculture states that, “in general nothing is more vital to good soil management than providing for the regular and systematic return of organic matter to the soil.”

By the time he attended college, “soil quality and soil tilth were not even recognized.” According to Keeney, this quote from his 1952 soils and soil fertility textbook says it all: “…If yields are climbing and organic matter levels are declining, we are more concerned with yields and organic-matter level becomes secondary. After all, our primary aim in soil management is to seek the highest yields that we can maintain with the greatest profit.”

The textbook also discusses that traditional sources of plant nutrients, manure and cover crops are no longer necessary. “…With the development of our synthetic-nitrogen fertilizer industry, we are no longer dependent on legume crops to maintain organic matter or to maintain high yields.”

Keeney went on to a career as a professor of soil science at the University of Wisconsin and “wholeheartedly embraced the new world of agricultural science that unfolded before me during my college years….I was a soils guy, one hooked on scientific agriculture, better living through chemistry and of course machinery to apply that chemistry.”

Keeney describes his 22 years at the University of Wisconsin in a nutshell: “The more I succeeded, the further I got from the Keeney Place, and the more my enthusiasm turned to disappointment.” The environmental movement, romps with family in rural Wisconsin, a stint working in New Zealand, serving on an environmental assessment for a doomed dam project in the Kickapoo region of Wisconsin and a national committee studying nitrates, friendship with Aldo Leopold’s daughter and other events eventually led Keeney to better advocate for integrating stewardship with agricultural production.

In 1987, he became the first director of the Leopold Center for Sustainable Agriculture. It was through that position that Keeney got to know PFI co-founders Dick and Sharon Thompson. Keeney writes that Dick and Sharon “should be considered Iowa’s legacy sustainable agriculture farmers. They left conventional farming in 1968 and set out to find and demonstrate better ways to farm. Everything they discovered and recommended to other farmers was backed up by research conducted on their own farm.”

Keeney recalls a fly-over of Central Iowa he took during the searing drought in 1988. “What struck us was the brownness of the fields; the only green spots were occasional small parks, cemeteries, and the sustainable Thompson farm. Their cattle pasture, the corn, and the soybeans were withstanding the drought better than any other farms we could see.” He also took a flight during the 1993 floods, and “no flooded fields were to be seen on the Thompson property.”

Dennis closes the book with the wedding of his granddaughter on a Wisconsin farm in 2013, a farm similar to the one he grew up on in its diversity and commitment to stewardship. The couple said their vows under three beautiful oak trees. “Lush pastures spread in every direction. Cattle grazed in the background, pigs oinked contentedly as they enjoyed a favorite mud hole, and guinea hens and turkeys foraged nearby.” Dennis “wished so much that our farm had turned out like this one where grassy pasture still nurtured the soil.”

That is not nostalgia. Dennis Keeney firmly decided what matters most and then devoted the last years of his career to that work. “I’d like to think the Keeney Place would have been an active PFI member,” he writes.

The book is available online at www.TheKeeneyPlace.com