Helen Gunderson: The Road I Grew Up On and more 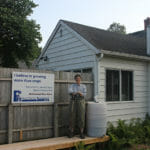 Remarks given at a celebration last Saturday for PFI member Helen Gunderson:

It is fitting that Helen chose Practical Farmers’ farm transfer work for her 70th birthday donations. Fifty-six percent of Iowa farmland is owned by people over the age of 65.

Helen is one of those landowners.

She was the first recipient, in 2013, of Practical Farmers’ Farmland Owner Award, for her efforts to improve the long-term sustainability of the land she owns in Pocahontas County. How is she doing that? In part, by increasing the number of crops planted on her land and helping a beginning farmer get started. She wants to make sure there are new generations on the land during the monumental farmland transfer that is now taking place.

Helen writes: “Land is a limited resource, and people who own it are in a unique position to make a difference. I have felt fortunate and privileged to have inherited farmland and the affluence that ebbs and flows with that.” She says she is “not personally caught up in the crises of losing land, being forced off a farm, living in poverty, or having to work for a meat-packing company or Walmart to survive.”

She does wonder about the cost of our current dominant agricultural system. She writes: “What is the long-term effect of having a system that jeopardizes the natural ecosystem of the rural landscape to such an extreme degree? I also wonder about the effect of modern agriculture on rural neighbors. It is hard to ignore the inverse correlation between the trend toward even larger farms and the population of Pocahontas County. I have no easy answers; instead, I have mixed feelings of nostalgia and disenchantment, love and disdain, as I walk along the road where I grew up.”

She says she does not believe in family land dynasties. Because of this belief and her commitment to sustainable agriculture and land stewardship, she will be donating some of her farmland to Practical Farmers of Iowa and the Iowa Natural Heritage Foundation upon her death.

Helen has devoted much of her creative efforts to understanding her past of rural Iowa. She says that: “My Iowa heritage is a gift and so is the passion to interpret it.”

Some of you here don’t know about her amazing work called The Road I Grew Up On.

In the 1940s, when Helen was a toddler, there were 11 farmsteads along the road where she was raised. Each place had a family that lived on it and farmed the land. Each farmhouse was nestled in a grove of trees with buildings such as corncribs, barns and silos. Each had animals — cattle, hogs, sheep, chickens, dogs and cats.

Today there are two families (three people) and few animals and buildings left on the road she grew up on.

Through the years, Helen has photographed and videotaped all the farmsteads, both occupied and abandoned, along the five miles. She interviewed the families along the road in addition to the people who moved away and other resource people. She documented the demolition of the homeplace house where her great-grandparents, grandparents lived and her father grew up.

She has documented road conditions and maintenance.

Moving day that took place in the spring when tenant farmers moved to new spots.

All those day-to-day items that are really at the heart of living.

In her book, Helen writes about the shocking events that bring people together, for collective rituals, to grieve: John F. Kennedy’s funeral, seeing the Space shuttle Challenger explode, the twin towers falling in Manhattan. The loss in rural America, Helen writes, is “less spectacular than the previous examples, but involving the death of an era and the loss of a way of life. IF there are no collective rituals designed to face the change, then art can help.

And Helen has provided that art.

What happened on the road Helen grew up on happened thousands of times over in Iowa alone. It happened on my grandparents’ road just miles from Helen’s. It is a true and deeply felt loss for those privileged to have a rural heritage and even more devastating for those still living in the countryside.

That loss was, in part, what lead both Helen and me both to Practical Farmers.

Helen has also documented male-dominance in rural Iowa and the limited role for women. In many ways, she would have liked to have farmed, but earlier in her life she didn’t feel that was an option. She must be delighted with the many women farmers in PFI! Her most recent video work is a celebration of those women, being shown in a smaller room here tonight. One of her recent photographs, of farmer Ann Cromwell, graces the latest PFI newsletter cover.

Helen’s many other projects include a video celebration for PFI’s 25th anniversary and one on farmers in Audubon County. One I particularly love is her video “On Being At Home in the Garden.” The video features lovely footage of her crops, her cat, her chickens, clothes on the line moving gently in the breeze. (Why is it so wonderful to see clothes moving with the wind?)

It also features a poem by Helen, which I quote from:

My garden connects me to a voice not heard in religions whose steeples pierce upward away from here, away from home.

The garden is home, with no division between sacred and secular.

It nurtures and sustains, uniting people and nature, the past with the present and the future.

I invite you to Helen’s website – gunderfriend.com – to view her works.

Not long ago, Helen wrote about all she wants to do:

Edit a video about the homeplace, wrap up aspects of her documentary project about the road she grew up on, produce additional YouTube videos from her archive of home movies and videotape footage, conduct video interviews for her church, be an advocate for sustainable agriculture and the use of locally grown food, work in her garden and tend to her chickens, take naps, make bread, pickles, soups and other great food, enjoy meals with friends.

“More importantly, I want to be centered and feel at home,” she wrote.

At age 70, I think Helen is in a great place in her life and is truly home. She has created an amazing urban farm, prairie patch, rain gardens and more on her third of an acre in Ames. Just think what an interesting community of people, plants and animals this would be if even 50 people followed Helen’s urban farming lead!

She has organized a variety of local foods dinners for this fellowship. She has done so many creative projects with more in the works. She is keeping healthy working her land and riding her bicycle around Ames. She is a valued part of this town, of the Unitarian-Universalist Fellowship and of Practical Farmers of Iowa. In her remarks accepting her Farmland Owner Award, she said “PFI is like family. You have helped me find a role in agriculture. It is a privilege to walk with you”.

Helen — on behalf of everyone here — it is a privilege to walk with you as well. On this occasion of your 70th birthday, we celebrate you!